The Lifespan of a Fact
by Jarrott Productions

The Lifespan of a Fact is based on the stirring true story of John d'Agata's essay, “What Happens There,” about the Las Vegas suicide of teenager Levi Presley. Jim Fingal is a fresh-out-of-Harvard fact checker for a prominent but sinking New York magazine. John D’Agata is a talented writer with a transcendent essay about the suicide of a teenage boy—an essay that could save the magazine from collapse. When Jim is assigned to fact check D’Agata’s essay, the two come head to head in a comedic yet gripping battle over facts versus truth.

“…terrifically funny dialogue…once the writer and the fact-checker get into a lively debate on the ethics of factual truth vs. the beauty of literary dishonesty, it’s time to really sit up and listen…Their deadly serious but oh-so-funny ethical dispute is brilliantly argued…the debate at the heart of this play transcends comedy and demands serious attention.”  - Variety.

JANELLE BUCHANAN (Emily Penrose) With Jarrott Productions: The Frog Prince, The Herd, For Peter Pan on Her 70th Birthday, & Significant Other. Other theatres and companies: Over 80 productions, including Doubt, August: Osage County, Dividing the Estate, Steel Magnolias, The Grapes of Wrath, A Delicate Balance, The Laramie Project, Macbeth, Much Ado About Nothing, Present Laughter, Love and Information, Ah! Wilderness and Bleacher Bums, to list a few. In addition, Janelle has many film, industrial and print credits.

WILL GIBSON DOUGLAS (Jim Fingal) Will is an Austin-based actor and director who has lived in the city since 2010. His relationship with Jarrott Productions started in 2018, when he starred as Jordan in their production of Joshua Harmon's Significant Other, for which he was nominated for B. Iden Payne and Austin Critics Table awards. He has worked on numerous other Jarrott Productions shows since, first as a production assistant and then as House Manager/Volunteer Coordinator and is a company member. He is also a company member at The VORTEX, where he most recently directed the "Cyclops" segment of The VORTEX Odyssey and has appeared in Click(Chaz) and The Tempest (Stephano). He frequently appears in Different Stages productions such as The Book Club Play, Great Expectations, Yankee Tavern, 4000 Miles, and Dracula. Other acting credits include: Ground Floor Theatre's world premiere of Dex & Abby, Heartland Theatre Collective's The Vineyard, Capital T Theatre's DNAand many more. In his free time he enjoys taking care of other people's pets and is the proud co-owner of two terriers, Bandito and Daisy.

CARLO LORENZO GARCIA (John D'Agata) Carlo Lorenzo Garcia is an actor/director/writer/designer. His previous work with Jarrott Productions includes A Portrait of My Mother with Jarrott Productions, nominated for 5 B. Iden Payne Awards and winner of Outstanding Lead Performer - Digital Live. He also directed The Children, nominated for 2 B. Iden Payne Awards. Most recently, he wrote and performed in Strange, But Perfect with Street Corner Arts. Other acting credits include work with Goodman Theatre, Mary-Arrchie Theatre Co., Strawdog Theatre Company, Shrewd Productions, Walkabout Theater Company at Lookingglass, Vineyard Arts Project and more. Film work includes Empire, Chicago P.D., and more. Carlo is a company of Jarrott Productions, Street Corner Arts, and an artistic associate with Teatro Vista. He would like to thank his partner, Natalie for inspiring him everyday. | www.carlogarcia.com

Please remember.  Covid 19 Mitigation procedures are in place.
All patrons will be asked to show their vaccination card (photo on phone is fine) or a negative covid test from the past 72 hours before entering the theatre.

PLEASE MAKE SURE YOUR PARTY KNOWS THE COVID RULES 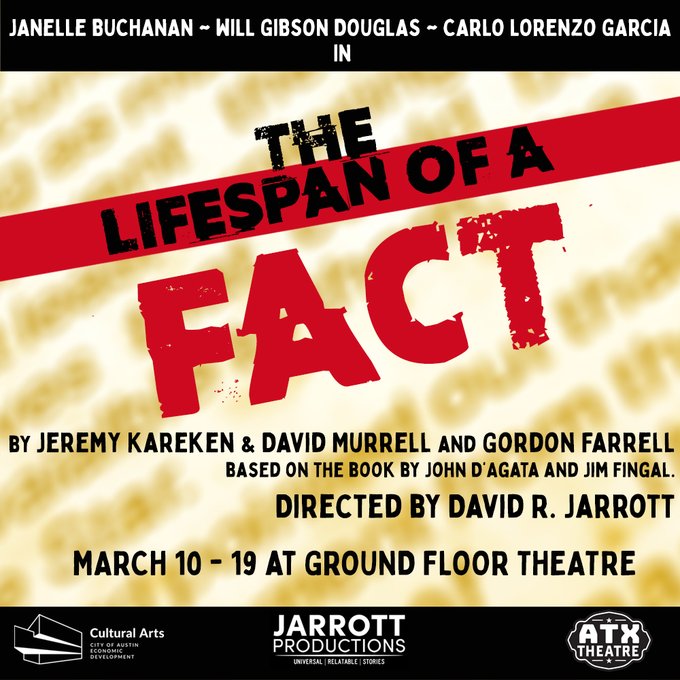