But Why Bump Off Barnaby?
by Way Off Broadway Community Players

This lunatic show poses a fascinating mystery. When Barnaby Folcey is murdered at a family gathering at Marlgate Manor, it transpires that he had a motive to murder everybody else, but no one had a reason to want him dead. While dying, he scrawled the letters “b-a-r,” which can implicate everyone. While the bizarre group frantically tries to unmask the murderer, people vanish, poison is found in the sherry, and the police take forever to arrive. Meanwhile, there’s a secret treasure to be found, a mystifying limerick to decode, and all sorts of doom to be avoided before the killer is finally unmasked and destroyed using one of the funniest methods ever seen on a stage.

Prodigal Barnaby is now the Late Barnaby! If the Butler didn’t do it, then who-? While Barnaby has motive to murder EVERYBODY, no one has reason to want HIM dead. And what do the letters  B  A  R scrawled by his dying hand mean? Murder is only one of this bizarre family’s worries: secret treasure, coded limericks, poisoned sherry, and imminent DOOM fall like an ACME anvils before the killer is finally - and hilariously - unmasked.

“Bring your magnifying glass, mystery caps, and British humor ...this is a play that will be one to remember.” -FHS Freedom Forum

But Why Bump Off Barnaby?
by Rick Abbott
Way Off Broadway Community Players

Way Off Broadway Community Players presents the fourth show of our 23rd season, the lunatic comedy, But Why Bump Off Barnaby? by Rick Abbot.  The show is directed by Caroline Olenoski, assisted by Suzanne Redfield.  Opening night is Friday, February 14, 2020, with performances February 14, 15, 21, 22, 28, and 29 at 8 pm, with two Sunday Matinees, February 23 and March 1 at 3 pm.

At the door ticket prices are $20 adults, $15 seniors, students, military and first responders, $10 children.  On-line ticket prices have been adjusted to offset the service fee partially. Advance tickets are available at Eventbrite.com or through a link on both the Facebook page and wobcp.org.  We are located at 11880 Hero Way West, Bldg 4, Leander, TX 78641 (behind Smokey Mo’s). 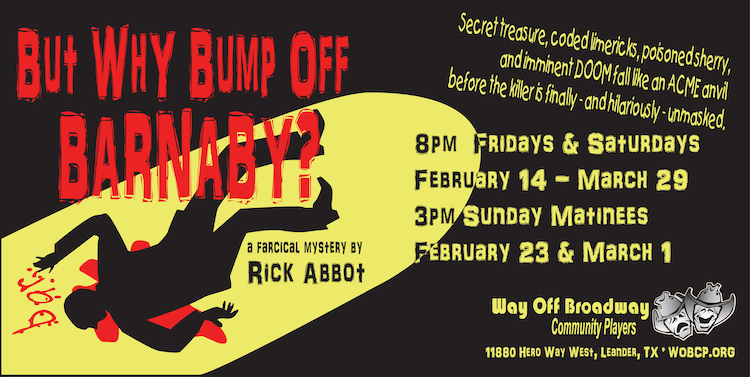 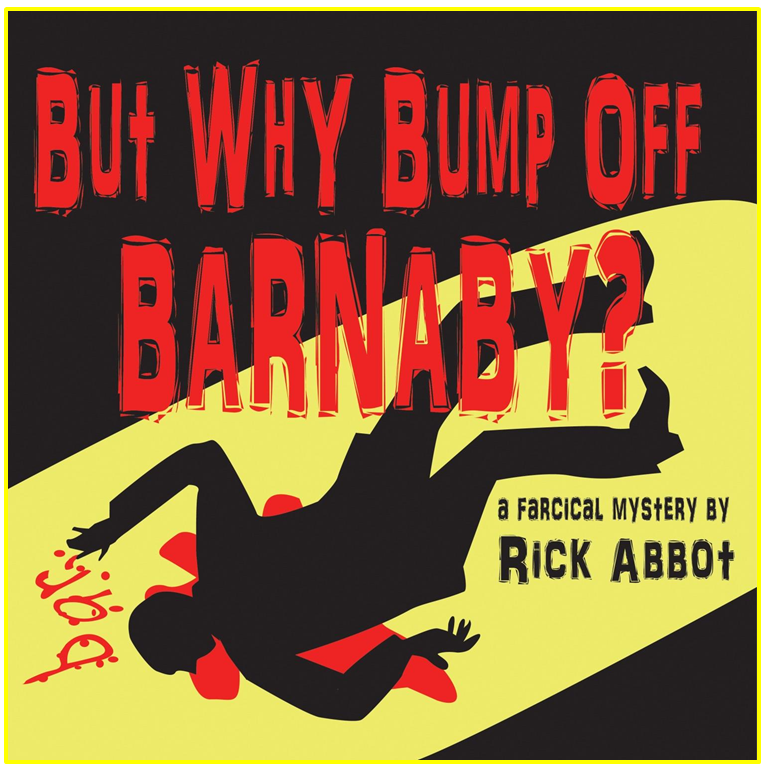