His city caught in a moral free fall, the Duke of Vienna hands over power to his personnel assistant, Angelo, who enforces long dormant codes of chastity with zealous fervor. But when an aspiring nun, Isabella, comes to plead for the life of her condemned brother, Angelo gives in to his own unholy desires and exposes the political and moral corruption that pollutes the entire city. The Duke, disguised as a friar, secretly watches the city’s turmoil and attempts to fix the challenges his departure created.

This production features students from the BFA Acting and Musical Theatre programs. To be admitted to these select programs, auditions are held nationally, reviewing upwards of 600 applicants for a dozen spots in each class. Graduates have developed successful careers in film, TV, prominent theatres across the country and on Broadway.

Chuck Ney directs this Measure for Measure in a contemporary setting. He has directed at the Kennedy Center, Illinois Shakespeare Festival, Texas Shakespeare Festival, Idaho Repertory Theatre and Manhattan Clearing House. His production of Richard III received seven nominations from the Austin Circle of Critics and his production of A Midsummer Night’s Dream was named one of the ten best productions of 2014. Bloomsbury’s Arden Shakespeare division published his two-volume Directing Shakespeare in America.  Historical Perspectives came out in 2018 and Current Practices in 2016. 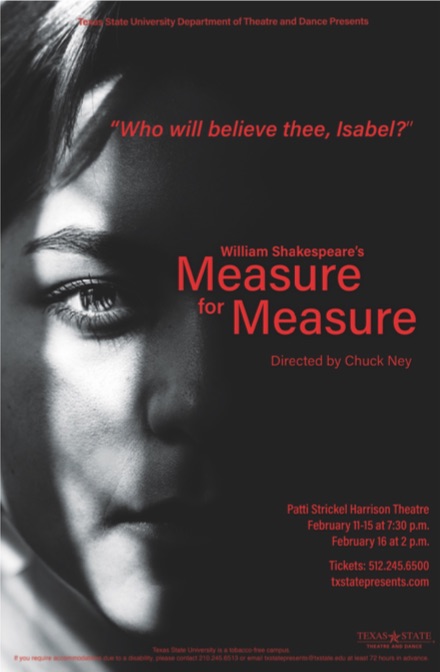