Saints, Sinners and Thieves is an evening of three one-act plays, Soldier of the Cross and A Fool and His Money written by Sally Seitz, and I Am Not the Person You Have Made Me Out to Be written by Marianne Serene, both playwrights achieving honors at Hype Park Theatre’s and ScriptWork’s short fringe festival, FronteraFest.

The character Trudy from Jane Wagner’s In Search of Signs of Intelligent Life in the Universe will introduce each play.

I Am Not the Person You Have Made Me Out to Be explores the misconceptions that are created around the perceptions of who we are for our parents. This play written by Marianne Serene will involve some audience participation.

Whether you are a saint, a sinner, or a thief, or all of the above, there will be much to captivate your thoughts and feelings in these three plays with commentary about each by Trudy.

Saints Sinners & Thieves will be produced in Howson Hall at the First Unitarian Universalist Church at 4700 Grover & 49th Streets in Austin.

It is produced by the Paradox Players, a community theater ministry in residence at First UU.

Join us and the Saints, Sinners & Thieves for an evening of thought provoking and soulful stimulation. 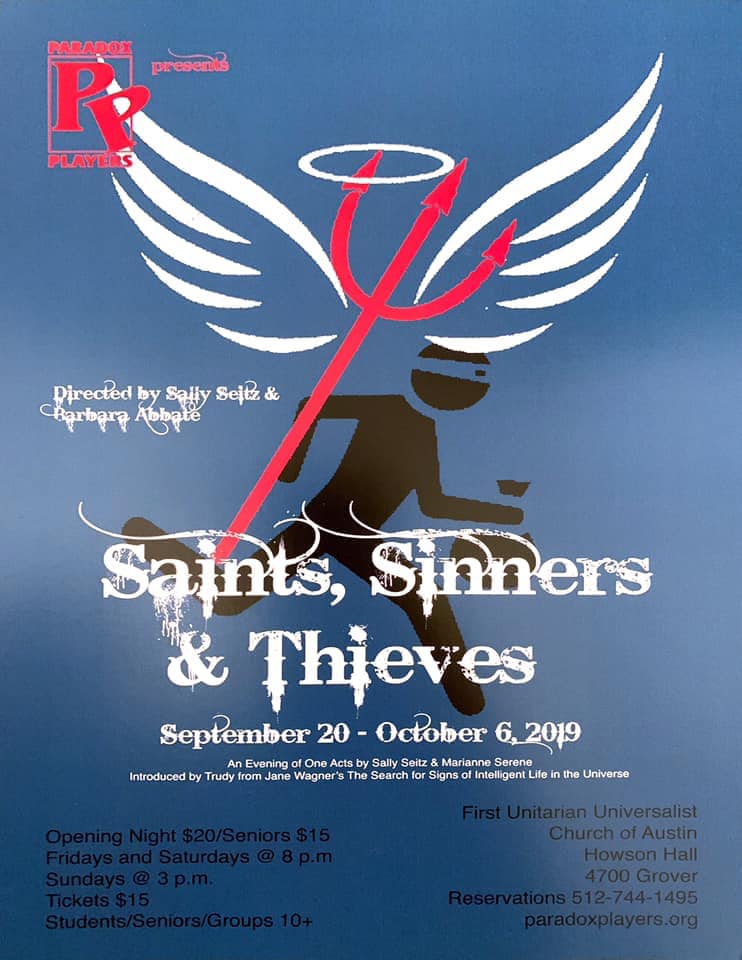 Paradox Players originated in 1999, the minister of First UU Church of Austin assembled church members who had expressed an interest in drama. The original group functioned as a drama …