The Hill Country Theatre will present the Pulitzer Prize and Tony Award winning drama “Doubt, A Parable,” as part of its Plays for New Audiences series, this month.  Director Patrick Lescarbeau has assembled an impressive cast of Austin actors who will be coming to Cottonwood Shores to perform the play.  John Patrick Shanley’s 90-minute one-act will run for four performances only, May 23-26. 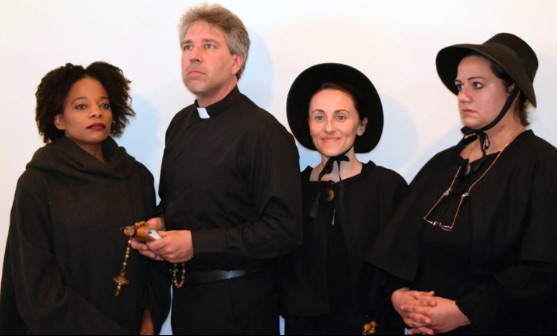 Sister Aloysius (Marcelle Abusalbi) is a rigidly conservative nun and principal at St. Nicholas Church School in the Bronx in the fall of 1964.  When Father Flynn (Patrick Lescarbeau), a beloved and charismatic parish priest advocates reform of some of the school’s strict customs, Sister Aloysius is put in direct conflict with his progressive outlook for the future.  When a fellow nun tells Sister Aloysius that Father Flynn may be paying too much personal attention to one of their male students, she begins a personal crusade against the priest – despite her lack of evidence.

Timely as ever, “Doubt, A Parable” is a searing and provocative work which raises important questions, and lets the audience come up with their own answer.

Director and actor Patrick Lescarbeau (Father Flynn) currently resides in Austin Texas. Acting since the age of nine in theaters in New York, Vermont, and Texas he made the crossover to film in late 2015 with the short “Rare Model.”  Since then, he has been filmed on location in Texas, California, New Mexico, and Tennessee.  Marcelle Abusalbi (Sister Aloysius) is from the Austin area and has performed with the UT Department of Theater and Dance.

Leila Anastasia Scott (Mrs. Muller) is a classically trained stage and screen actress.  She has been seen in many commercials and had a principal role in Steven King’s “In the Death Room.”  Recently, Leila had principal roles as British forensic scientist on the web series “Traffic,” and in the short film “Nah Sorry.” She also co-starred in the feature film “Perspective.”

Chiara McCarty (Sister James) is originally from Italy, and her credits include dozens of theatrical and film productions.  She had extensive training in Los Angeles before making her way to Texas.  Chiara was last seen on the stage as Cleo in the world premiere of “Kill All Politicians” at the Hollywood Fringe Festival in 2016.

HCCT provides only comedies and musicals for its regular season shows. The Plays for New Audience series will allow theatre-goers to see thought-provoking dramas.  “To be a well-rounded performing arts organization we must produce dramas,” said Mike Rademaekers, the theatre’s executive director.  “Plays for New Audiences will present short runs of plays that have social significance and explore the human condition.  Some of these plays might have controversial themes or language that is not right for everyone.  ‘Doubt’ gives our patrons a chance to see this Pulitzer Prize and Tony Award winning play.  It takes place during the civil rights movement, but many of the issues are relevant to problems we are still facing today.”