She Kills Monsters by Qui Nguyen, a dramatic comedy that debuted Off-Off Broadway in 2011, has received national attention as a warm and moving play about a young badass’s journey into the world of Dungeons and Dragons to connect with her late sister. As we join in her quest, we explore the challenges, roadblocks, and 3-headed dragons that can create the crumbling landscapes of teenage challenges. With courage and alliances, we find a way through shifting times.

"Deceptively breezy and rather ingenious. The whole enterprise is kind of dopey and kind of invigorating and kind of remarkable. It will slash and shapeshift its way into your heart."

"Nguyen is a refreshing, break-the-rules writer — he has a ready embrace of pop culture, high-school speak and 'High Fidelity' cool, and he also has a mission to redeem gaming geeks everywhere...She Kills Monsters, delivers exactly what it promises, is generally a blast"

ABOUT THE VORTEX’S SUMMER YOUTH THEATRE: For several generations, SYT has provided quality theatre to Austin audiences. SYT teams adult professionals with students to create high-caliber theatrical productions of world-class literature. The Austin Chronicle named SYT “Best Theatre Program that Treats Kids like Grownups.” Nominated for dozens of local awards, SYT has been recognized with B. Iden Payne Awards for Outstanding Production of a Play for Children for The Commedia of Errors, Outstanding Direction of a Play for Children for The Commedia of Errors, The Physicists, Moby Dick, and The Frogs, Outstanding Acting for The Physicists and Moby Dick, and Outstanding Sound Design for Machinal. Every year, students work with adult artists who are among Austin’s most celebrated theatre professionals. Producing Artistic Director, Bonnie Cullum, who founded SYT in 1991, was inducted into the Austin Arts Hall of Fame in 2009.

ABOUT THE DIRECTOR:  Teresa Cruz is a theater director from Austin, Texas. Her work was last seen at the Plurality of Privacy in 5 Minute Plays Festival at The VORTEX in Austin. She is currently a company member, technical assistant, and general operations assistant at The VORTEX. She has been able to travel the country assisting Obie-Award winning director Lileana Blain-Cruz most recently on Water by the Spoonful by Quiara Alegría Hudes at Center Theatre Group in L.A, and on Henry IV Part I at Oregon Shakespeare Festival as a part of the FAIR program. She was selected as an ambassador to The Ground Floor's Summer Residency Lab at Berkeley Rep, where she assisted the UNIVERSES ensemble as they devised Unison, a new musical based on August Wilson's unpublished poetry. In NYC, she was an Artistic Intern and Play Group reader at Ars Nova. She graduated from Connecticut College with a degree in Psychology and in Theater, with a concentration in directing and devising under the tutelage of David Jaffe and Kenneth Prestininzi. Favorite directing work includes Eugenie Chan’s Bone to Pick, Ayad Akhtar’s Disgraced, and Maria Irene Fornes’ Mud. Upcoming projects include: Bird-Mad (Producer/Director), a new adaptation of Aristophanes’ The Birds, Darlington, SC; She Kills Monsters, by Qui Nguyen, Summer Youth Theatre at The VORTEX.

ABOUT THE PLAYWRIGHT: Qui Nguyen (born in El Dorado, AR) is a Vietnamese American playwright and fight director. He is an artistic director of the Obie Award and Caffe Cino Award-winning Vampire Cowboys Theatre Company, whose productions, penned and choreographed by Nguyen, have performed to sold-out audiences at the New York International Fringe Festival, been published nationally in Plays and Playwrights 2005, enjoyed extended runs throughout the nation, and have been nominated for and received awards in movement and fight direction. He is a member of New Dramatists, Ensemble Studio Theatre, The Playwrights' Center, and the Ma-Yi Theater Company's Writers Lab. He also began writing for Marvel Studios in 2016. 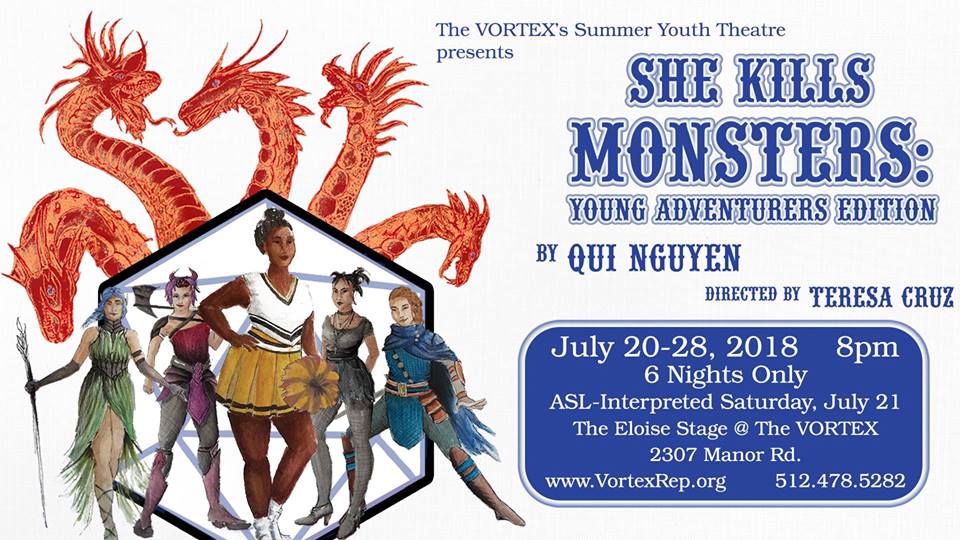