Rude Mechs is thrilled to deliver the world premiere of a brand new Fixing Shakespeare play. This time Kirk Lynn's site is set on Fixing Troilus and Cressida, and Alexandra Bassiakou Shaw is directing.

Troilus and Cressida is the love story hidden in the center of history’s greatest war. As the Greeks enter their seventh year of hammering against the Trojan’s wall, one young warrior, Troilus, is ready to risk it all and pledge his loyalty to a new love. The young woman, Cressida, is cautious, having been punished for her father’s treason and made a servant to the Trojan princes.

The relationship is nurtured by the matchmaker, Pandarini, who advises, scolds, and pushes the lovers to trust one another. Around them war and chaos burn, Hector rages, Ulysses plots, Achilles stalls, Agemomnem tries to keep it all together, and Cassandra forsees death.

Let your heart be slaughtered by the Rudes’ take on Shakespeare’s take on Homer’s Illiad. We’re brave enough to tell you whether Helen really wants to be there and to once and for all find out if romance can survive politics or family.

Fixing Shakespeare makes William Shakespeare’s least produced works useful again. Ask yourself how many Shakespeare plays you know or have seen, subtract that number from thirty-seven (depending on who you ask), and those are the plays we are working to fix using our patented performance creation methodology, contemporary English, and adding curse words. (Shakespeare cursed plenty, but most Elizabethan curse words have lost their spice. Zounds!) 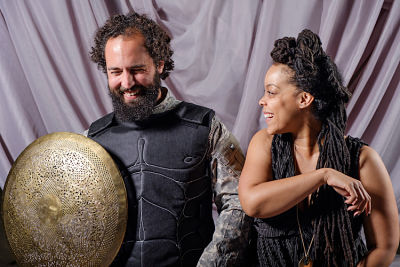