The World Goes ‘Round is not your typical musical revue or “tribute show”. It’s a show about life… with all the ups and downs, highs and lows, and everything in between. Featuring songs from iconic Broadway shows (Chicago, Cabaret, The Rink, Kiss of the Spider Woman, and many more), ATP has re-imagined the show and has set it in the Paradise Café, a typical coffee shop with a live five-piece band and customers who break out in memorable songs at the drop of a hat!

“The World Goes ‘Round is such a unique production in that almost all of the music has been rewritten and arranged especially for this show,” explains David Blackburn, ATP’s artistic director and the director of TWGR. “I love this show for the music and arrangements, but I’m not a huge fan of your typical musical revue or tribute show. My goal from the outset was how can we present the show in a completely different way without diminishing the power of the music. I won’t give too much away, but I think our audiences are going to have a great time… and a cup of coffee, if they wish.”

Austin Theatre Project is thrilled to announce a cast of four newcomers and one veteran. Returning after his performance in Dogfight is Nathan Daniel Ford. The ATP newcomers rounding out the cast of The World Goes ‘Round are Noah Cantrell, Nicole Griggs Cates, Megan Hudson, and Kathryn Lane.

Music direction is by Audrey Barrett ([title of show], Bare, Perfect Life) and choreography is by Chris Ehresman (Bare, [title of show], First Date, Great American Trailer Park Musical). In his fourth year with Austin Theatre Project, James Jennings will once again be creating his award-winning lighting design. Sound design will be by Jeff Miller and Veronica Prior will once again be providing costume design. Props are by April Hudson and Barbara Schuler is the producer for the production.

The World Goes ‘Round will open November 17, 2017 and run through December 2.

All performances will take place at the black box theatre of The Trinity Street Players (901 Trinity Street) which is on the fourth floor of Austin’s First Baptist Church.

For more information, or to purchase tickets, visit the ATP website at www.austintheatreproject.org. 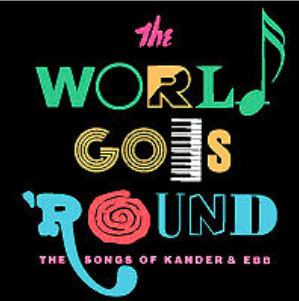 Our Story It started as a dream... a passing thought... and then one day, Barbara Schuler and David Blackburn were sittting in a San Antonio theatre after watching a production …