From the bonny shores of England comes the Styckes-Upon-Thump Repertory Theatre Company, a stuffy old travelling troupe embarking on their fifteenth annual farewell tour of the Dickens’ tale. The company includes Sir Selsdon Piddock, the consummate actor, in the role of Ebenezer Scrooge, with Mrs. Bettina Salisbury, Dame Rowena Middleton-Lewis, Mrs. Cordelia ffoliet-ffolkes ffortescue Woods, Teddy Shub and Elyot Crummels in multiple supporting roles. Sweet Cynthia Imbry, the general understudy, suddenly finds herself thrust onstage to perform a role she’s ill-prepared for! Bettina, the company diva, pretends to be ill, certain the production will be cancelled. However, much to her shock and rage, the show does go on without her! Roles are shuffled at the last minute and poor Cynthia finds herself center stage. 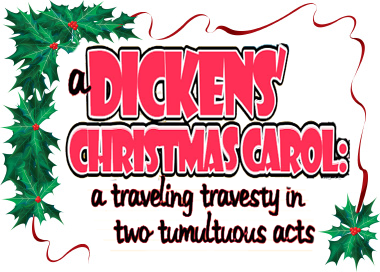