The Best Little Whorehouse in Texas
by Tex-Arts

The Best Little Whorehouse in Texas is a political satire full of flirty fun and gusto. Based on a true story, the show tells of the demise of a brothel located just down the road from Austin.  The real-life story made national headlines in the 1970’s when investigative reporter Marvin Zindler started a crusade to shut the infamous house that had been in operation for more than a century.  The cornball TV personality from Houston caused such a primetime ruckus that the local politicos, most of whom were regular customers, forced the Sheriff to close down the legendary institution.  The show ran for 1,584 performances on Broadway and was nominated for eight Tonys, including best musical, in 1979. A film adaptation followed in 1982, starring Dolly Parton and Burt Reynolds.

“Since the early ‘80’s, when Burt and Dolly descended on Pflugerville to film the movie version, this has been one of my absolute favorite musicals,” said Jarret Mallon, TexARTS executive director. “I’m so thrilled that TexARTS is bringing this big bawdy show back to The Lone Star State.  It’s going to be a racy, flirty, sexy evening with some amazing performers.”

Sarah Gay directs the show.  Ms. Gay returns to TexARTS having previously directed Ring of Fire: The Johnny Cash Musical Show and My Way.  New York-based choreographer, Kimberly Schafer returns, having previously choreographed TexARTS’ All Shook Up and directed The Marvelous Wonderettes. Ms. Schafer is the dance assistant to Tommy Tune, the Tony Award-winning director and choreographer of the original Broadway production of The Best Little Whorehouse in Texas.   Award-winning music director, Susan Finnigan serves as the production’s musical director.

The Best Little Whorehouse in Texas
by King, Masterson and Hall
Tex-Arts

A special student preview performance will be held August 17 at 7:30 pm.

All performances will be held at the intimate Kam & James Morris Theatre at TexARTS’ Erin Doherty Studios, 2300 Lohman's Spur, Suite #160, Lakeway, TX. The lounge opens one hour prior to curtain and offers beer, wine and light snacks. Parking is free. 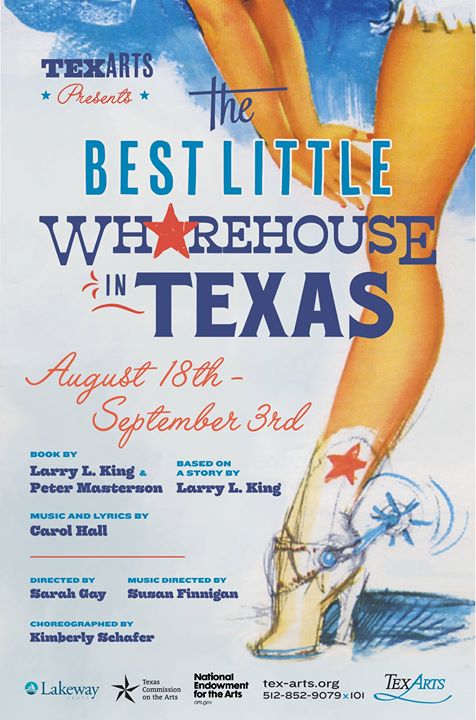 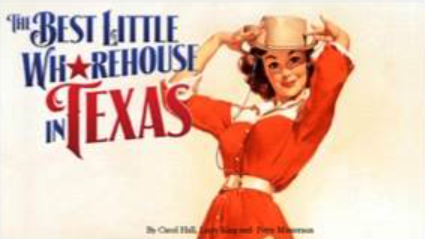