Murder. Greed. Corruption. Treachery. And all that jazz!

Come on babe, why don’t we paint the town! The City Theatre Company is thrilled to top off its 2017 summer theatre season with the most razzle - dazzling of stage musical greats Chicago, now the longest-running American musical in Broadway history. The production runs August 18th – September 10th at City Theatre Austin.

Chicago has everything that makes Broadway great: a universal tale of fame and fortune, one show-stopping-song after another, and the best dancing you’ve ever seen. It’s no wonder it has been honored with countless awards and thousands of standing ovations worldwide. Set amidst the flashy decadence of the 1920s, Chicago is the story of Roxie Hart, a housewife and nightclub dancer who murders her on-the-side lover and transforms her malicious crime into sensational headlines reminiscent of today’s tabloids. Can the slickster lawyer Billy Flynn keep Roxie and side-kick Velma out of the gallows—and in the spotlight? Are the front pages of Chicago’s papers big enough for two murderous showgirls? Ain’t there no decency left? The edgy storyline is rocket-propelled by a tart, jazzy vaudeville score featuring such Broadway standards as All that Jazz, When You’re Good to Mama, Cell Block Tango, Mr. Cellophane, and Razzle Dazzle.

The show stars Emily Perzan, Alexandra Bates, Patrick Wheeler, Kirk Kelso, B.J. Ortwein, Shelby Schisler, Dara Hasenkampf, Lexie DeAnda, Jane Schwartz, Lariena Armstrong, Megan Sherrod, Misty Barham, Kevin Oliver, George Myatt, Buddy Novak, and Sam Gallant. Directed by Matthew Shead, who directed CTC’s productions of Grease, Little Shop of Horrors, and the award-winning Love! Valour! Compassion! Musical direction by Thomas Azar and choreography by Mark Sharon. Written by the highly successful song writing team of John Kander and Fred Ebb, whose musical hits include Cabaret, Chicago, Woman of the Year, and Kiss of the Spider Woman. With a presence on Broadway for nearly 40 years, Kander and Ebb have one of the longest collaborations in the history of the American musical theater. As well, Bob Fosse is no stranger to the American musical, as a dancer, choreographer, director, screenwriter, film director and actor. He won eight Tony Awards for choreography and direction, more than anyone else. For an article on the show and composers check out “Inside Chicago” by Scott Miller.

CANCELLED: Performance of Saturday, August 25, due to inclement weather. 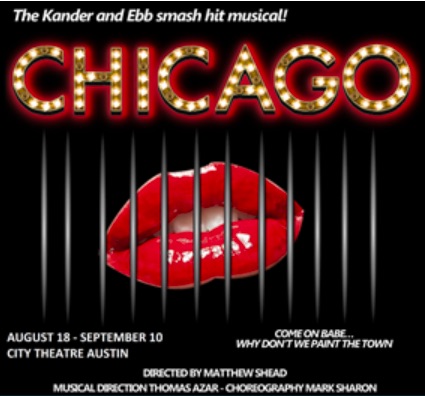