The Pirates of Penzance
by Gilbert & Sullivan Austin

Gilbert & Sullivan Austin presents its summer 2017 grand production of The Pirates of Penzance; or, The Slave of Duty. Nine performances of this classic will be presented at the Worley Barton Theater at Brentwood Christian School, June 15-25, 2017.

The Pirates of Penzance will delight Austin theatergoers of all ages who relish tuneful music, dazzling staging, and hilarious shenanigans by a band of soft-hearted pirates, bumbling bobbies, and sweet Victorian maidens—not to forget that very model of a modern Major-General!

All performances will have supertitles for dialogue and lyrics. A special Children’s Matinee is at 1 pm on June 18th, immediately prior to a 2 pm matinee performance. Children will be invited to come on stage and meet the cast, crew, and orchestra along with other activities.

A complimentary buffet with the cast follows the Friday, June 16 Gala Performance.

The Pirates of Penzance premiered in New York City in December of 1879, where the show was well received by both audiences and critics. Its London debut was in April of 1880. It is without question one of the most popular shows in theater history and has been performed around the world continuously for over 138 years. Pirates was the fifth Gilbert & Sullivan collaboration, and it introduced the ever-popular and much-parodied Major-General’s Song.

Gilbert & Sullivan Austin (formerly The Gilbert & Sullivan Society of Austin) was founded in 1976 with the purpose of education by preserving and presenting the works of Gilbert & Sullivan. Known for its highly acclaimed annual grand productions from the G&S repertoire, the organization is also dedicated to spreading and teaching the joys of G&S through school and community presentations.


This project is funded and supported in part by a grant from the Texas Commission on the Arts and in part by the Cultural Arts Division of the City of Austin Economic Development Department. Visit Austin at


The Pirates of Penzance
by W.S. Gilbert and Arthur Sullivan
Gilbert & Sullivan Austin 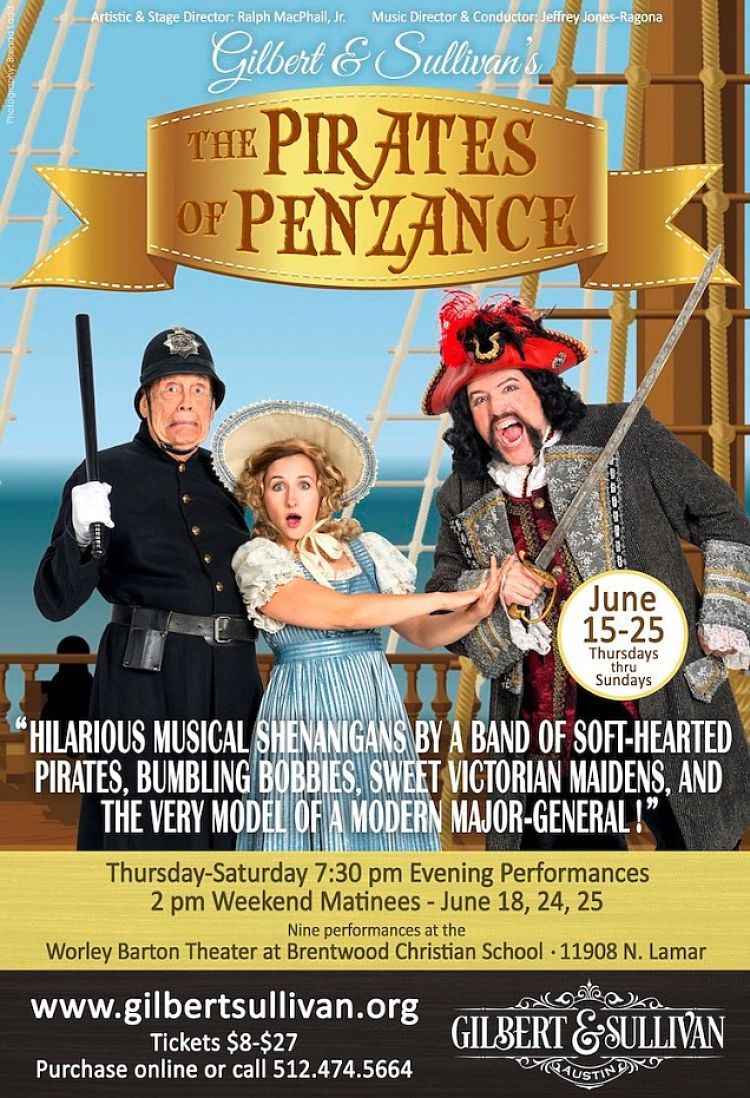