PASA IS PLEASED TO ANNOUNCE OUR 2016 SEASON OF PRODUCTIONS ON THE MAIN STAGE!!!!! 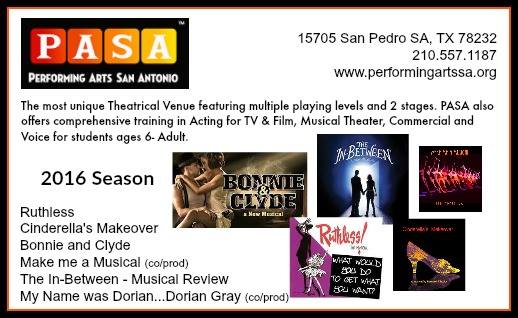 Ranging from the campy cult favorite, the stage mother of all musicals "RUTHLESS" to the dynamic "BONNIE & CLYDE".

A gorgeous musical revue featuring the music of a new musical being developed for London's West End "THE IN-BETWEEN-MUSICAL REVUE".

Also join us for "MAKE ME A MUSICAL" AND "CINDERELLA'S MAKEOVER" by Bernard Taylor and a new ONE-MAN show by Derek Berlin "MY NAME WAS DORIAN...DORIAN GRAY".

We will be announcing audition dates for late November where you will be able to audition for all the shows in the season!! Also stay tuned for information concerning "SOUND BYTES" AND "DARK READINGS"!!! Lot's of new and exciting things happening at PASA and more to come soon!!!!