Oklahoma! - The first collaboration of famed partners Richard Rodgers and Oscar Hammerstein II, Oklahoma! sethe American musical theatre standard. Set in the Western Indian Territory just after the turn of the 20th Century, the spirited rivalry between the local farmers and cowboys provides the backdrop for the love story between Curly, handsome cowboy, and Laurey, a beautiful farm girl. As the road to romance and the road to statehood converge, Curly and Laurey are poised to spend their new life together in a brand new state.

Dance auditions will begin promptly at 7 pm, singing auditions will follow.  Actors should prepare 16-32 bars from asong appropriate to the style of the show. Please bring sheet music; an accompanist will be provided. No tracked music or a cappella singing will be allowed. Individuals of all ethnic and cultural backgrounds are encouraged to audition for all roles. No need to sign up for an audition time, just show up a little before. Please bring a head shotand resume if you have one. Auditions are only for ages 16 and up.  Performers 18 and up will receive a small stipend for being in the show.

$25 Dollars for both or $15 each. Limited space available. Registration opens November 16th.

*Laurey, Female, Soprano, (18-35) She has an innocence and yet an air of knowledge about her. She lives with her

Aunt Eller on a ranch and is in love with Curly, though she may not admit it right away.

*Curly, Male, Baritone, (18-35) Has a confident swagger and deserves it, he is the most handsome man in the whole county.

He is in love with Laurey, but refuses to admit it. He’s a cowboy and the romantic lead. He is called Curly for his curly hair.

Aunt Eller, Female, mezzo, (40-65) She acts as the town’s aunt, a fun-loving caretaker. She watches over the town and a

ranch with her niece, Laurey and a hired hand, Jud. She sees the good in everyone.

Will Parker, Male, Tenor, (18-35) Will is a cowboy who is skilled enough to compete in rodeos. Being able to do rope tricks

is a plus. Will is a dance role, tap dancer preferred. He is interested in Ado Annie, but isn’t the brightest bulb.

Jud Fry, Male, Baritone, (18-35) Described as dark and growly by others, Jud takes care of the ranch Laurey and Aunt Eller

live on. Jud does not fit in with the society he lives with, he is seen by most as an outsider and misunderstood. He has feelings

for Laurey. He works hard to take care of Laurey and Aunt Eller on the ranch.

Ado Annie Carnes, Female, Soprano, (18-35) Andrew Carnes’ daughter, she “Can’t Say No” to anyone. She wants everyone

to be happy. Her heart is always in the right place, but she isn’t always the best judge of character. A comic, romantic lead,

she is wooed by Ali Hakim, but deep down she feels a connection to Will Parker.

Ali Hakim, Male, (18-35) Traveling peddler who says he’s from Persia (present-day Iran). Though we aren’t sure how much

of what he says we can believe. He, like Jud, is an outsider to this community but not feared by most. He likes pretty things

and women. He pursues Ado Annie and Gertie Cummings.

Gertie Cummings, Female, Alto or Soprano, (18-35) From the next town over, she has eyes on Curly and isn’t waiting

around for Laurey to say no to him. She has a unique laugh.

Andrew Carnes, Male, Tenor, (40-60) He is very protective of his daughter, Ado Annie. He doesn’t want Will Parker to marry

her because he believes the cowboy’s life to be risky and unreliable. To prove this isn’t true he asks for Will to maintain $50 in

order to have his daughter’s hand in marriage. He is a rancher and doesn’t feel very kind to cowboys in general.

*Dream Curly, Male, Dancer, (16-35) He must be able to dance a ballet and should resemble Curly in Laurey’s dream ballet.

May be doubled as another character or in the ensemble.

*Dream Laurey, Female, Dancer, (16-35) She must be able to dance a ballet and should resemble the actress playing

Laurey. May be doubled as another character or in the ensemble.

*Laurey and Curly could possibly not need dream counterparts if they have a strong dance background. 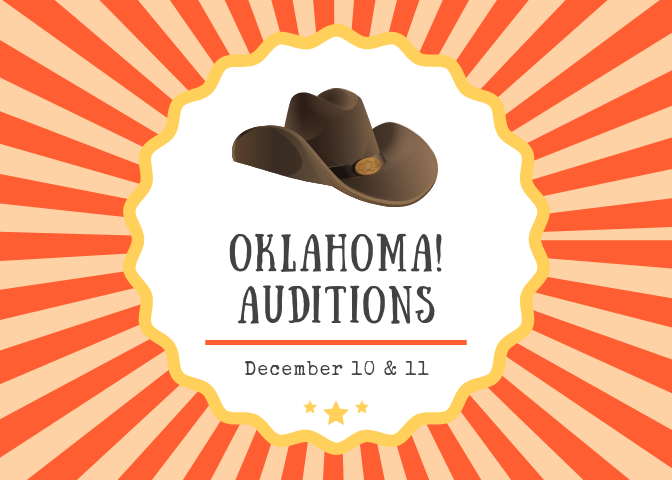