Review: You Can't Take it with You by Trinity Street Players
by Michael Meigs 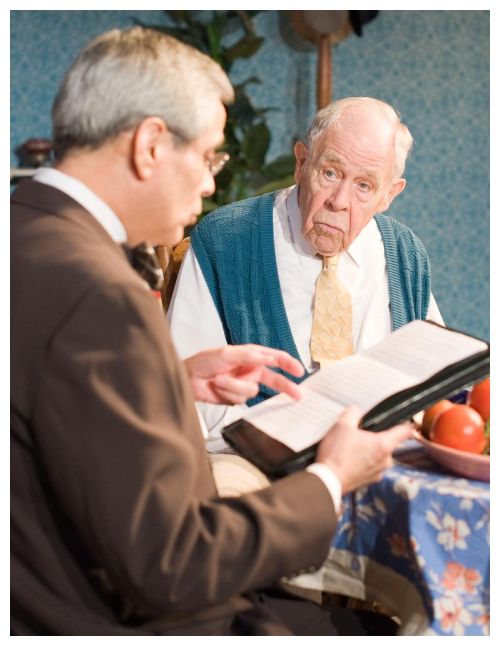 Director Rev. Ann Pittman and the Trinity Street Players have put together an accomplished, warm and funny production of Kaufman & Hart's You Can't Take It With You at the 4th floor black box theatre of Austin's First Baptist Church, 901 Trinity Street, downtown.

This affectionate study of a family of distracted amateur would-be artists and entrepreneurs bears the title You Can't . . . but the message is clearly You Can.  You can be an artist, a writer, a dancer, a fireworks maker, a master printer -- even if you don't really have much talent for it.  One major pleasure of art is the pleasure of creation, without much thought for commercial success or even for an audience, other than for family and friends.  That theme fits a lot of Austin's theatre scene, even though the level of talent here is a lot higher than that in the Vanderhof family.

The Trinity Street Players themselves are proof of the theme, as well, for these players, many of them self-confessed neophytes, do a fine job of bringing the Vanderhof clan to life.  With Rev. Pittman's assured directing and perceptive casting, they spin the fleece into gold.

Moss Hart and George S. Kaufman fill the comfortable 1930s Vanderhof household with a large cast of residents and visitors -- 19, by quick count.  The comedy has lots of movement and incident, very much like a pocket circus.  Pittman has it beautifully blocked and choreographed, an accomplishment that crystalizes in the moment when the pompous and straightlaced Kirbys show up on the wrong night for a dinner invitation.

Roland Johnson, at center as the patriarch Martin Vanderhof, surely must be playing himself.  If not, his deadpan comic performance is an off-the-charts triumph.  Fifteen years earlier, Grandpa Vanderhof dropped out and turned on to life.  He stopped paying income taxes, too, and his patient explanation of this principled neglect drives a stressed IRS agent (Hector DeLeon) right up the wall.  Grandpa's mild-mannered Tea Party rhetoric, 75 years later, prompted gales of laughter.

Other favorites are Linda Miller Raff as Penny Sycamore, author of half a dozen unfinished playscripts prompted by the mistaken deliverery of a typewriter six years earlier; Kate Spencer as Alice the sparkling ingenue, Penny's daughter, whose romance with her young boss (Jeremy Christopher) pits the straitlaced against the cheerfully unlaced; and Mikey DeLeon as the Russian dancing master Kohlenkhov, delivered with a rich and emphatic sauce of Russian vowels.  Sparkling  bit parts include Stephanie Morris as the tipsy visiting actress, Doug Keenan as Paul Seymore and Tommy Chiodo as Mr. DiPenna the milkman, partners in the basement fireworks laboratory; and Gay Wucher as the Grand Duchess Olga, a dispossessed White Russian who drops by to cook up some blinis.

The plot is dutifully well carpentered, as conflicts are set up and resolved, homemade good sense prevails, and the IRS drops its (justified) demands, thanks to a fortunate error in official record keeping.  In the midst of the Depression, the Vanderhofs live happily on the income from Grandpa's property holdings.  The denouement is a Saul-on-the-road-to-Tarsus moment for senior banker Kirby, who is saved from Wall Street.

The Trinity Street Players give us an amusing evening, played out up close in a perceptively decorated living room set that seems to stretch back forever.

Upcoming for the Players this year are the perennial favorite The Fantasticks in August, and Shadowlands, a drama based on C.S. Lewis's last years, in November.

You Can't Take it with You
by George S. Kaufmann and Moss Hart
Trinity Street Players