Review: Upon A Midnight Dreary by Last Act Theatre Company
by Michael Meigs

Edgar Allan Poe is a deceptively attractive figure for theatre makers.  We've all read with a delicious shiver his best-known short stories.  His themes of death, madness and mystery are so very elemental that they have never gone out of style. The elaborate early 19th-century style of his poetry may be a challenge, but the simple sardonics of his short stories, often in first person, appeal to our desire for intensity.

As long as you're doing your own adaptation or interpretation, you don't have any royalties to pay, either, since the dissolute Mr. Poe collapsed on the streets of Baltimore in 1849 and died shortly thereafter.

The newly established Last Act Theater Company has a genesis typical of ambitious young theatre groups in Austin. Five of the six members of the board are theatre graduates of Texas A&M Corpus Christi. They got started in Austin last October with Theatre de Grand Guignol at the Hideout Theatre and they have announced three more works for 2011-2012: a modern adaptation of Shakespeare's Titus Andronicus and original scripts by Gary Jaffe and by Bretton B. Holmes.

Upon A Midnight Dreary is an uneven evening of dramatizations. In the opener, Mateo Barrera and Ben McLemore come to the front of the stage with a back-and-forth dialogue that initially seems to be your standard pre-curtain speech to the house, written in bantering style. They segue without announcing it into Poe's 40-line atmospheric "The Conqueror Worm," an arch evocation of an evening in a theatre that begins, "Lo! 'tis a gala night/ Within the lonesome latter years!/ An angel throng, bewinged, bedight/ In veils, and drowned in tears,/Sit in a theatre, to see/A play of hopes and fears,/ While the orchestra breathes fitfully/ The music of the spheres."

Poe's conceit behind that elaborate description, announced in the final lines, is that "Man" is the play and the Conqueror Worm is the hero.  The choice of the poem was appropriate -- after all, we were there in the classroom at Manos de Cristo to see a play.  But Poe's piece demands close attention, as would, for example, a resounding Shakespeare soliloquy -- but by the time we realized what was going on, we found ourselves most of the way through the text and grasping for the meanings. This would have been more effective as a solo dramatic presentation, so that the audience could understand the actor's 'build' of the metaphors.

In his adaptation of the master's 2400-word The Cask of Amontillado (here recast as The Barrel of Beauregard Vintage '72) Bretton Holmes retains the essentially first-person viewpoint. Andrew Brett is the bitter protagonist who eventually decoys a despised drunken aquaintance (Sam Mercer) into a cellar and in revenge walls him up there forever. Poe's piece sets the scene with three short paragraphs and then continues mostly with dialogue between the two men. This may have seemed a bit short for staging, so Bretton set the ranting Brett in a bar where he addressed the audience and, occasionaly, bantered with the bartender (Sara Billeaux).  Behind him, an elaborate, distracting pantomime went on, involving two male customers and a femme fatale.  (Literally "fatale," I understood later from the spectator next to me -- there was poison placed in a drink, a point that I missed because I was concentrating on the two protagonists.)

In contrast to those somewhat overstaged pieces, The Tell Tale Heart was direct, convincing and suspenseful. Poe's original is even shorter, at 2100 words, and it's a purely first-person narrative of a murder. Greg Klein's adaptation takes the principal concept -- the alarming and disorienting effect of heightened aural and visual sensitivity -- and develops it in a completely different context.  An ordinary married couple suffers a mugging outside their apartment during which he is shot and she is wounded in the head. As they recover, we soon understand that Mary has begun to receive erratic amplification of sounds around her. Her husband brings in a physician -- or a psychiatrist? -- for consultations, but there's something not quite right about the man. Or is there? Karen Alvarado is intent throughout the increasingly unpleasant contacts with Travis Bedard, as the doctor's expertise and motivation come increasingly into question. At moments she -- and we -- seem to hear Bedard's thoughts, and there's a warning flicker of red light cast across the stage. Writer Klein and this cast raise the suspense, slash it literally with an attack, and resume the build. Inexplicably, husband John (Andrew Rodgers) brings this strange healer to live with them. The uncertainties and torment continue, culminating eventually in a crime, suppression and discovery in a perfectly pitched dénouement. The two adversaries deserve their applause, but so does director Micah Goodding.

Alvarado and Bedard are familiar faces to those who follow the non-commercial theatre in Austin. She has appeared several times with Teatro Vivo. Both were in Capital T's Spirits to Enforce at the Blue Theatre and in the Exchange Artists' inventive fable The Story Seekers on the grounds of the Elizabeth Ney museum. With absolutely no influence in the process, I could easily imagine Bedard as the noble, wronged Titus Andronicus and Alvarado as his daughter Lavinia, raped and mutilated by the Emperor's sons, whom the vengeful Titus murders and serves up in a pie at the royal banquet.

But that's getting ahead of ourselves. For the moment, let's welcome the Last Act Theatre Company and express our satisfaction that Upon A Midnight Dreary is not their last act in Austin. 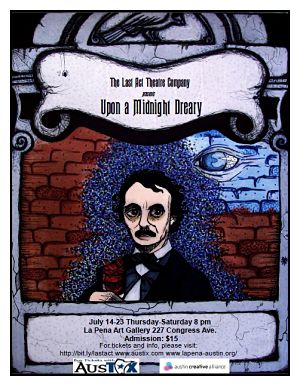