The Tragedy of the Individual

“Why am I old?” shouts Uncle Vanya about mid-way through the play bearing his name.  He doesn’t ask anyone in particular and he doesn’t expect an answer.  It is a statement, a question, an interjection as well as a plea. Perhaps he’s speaking to himself, perhaps to his family and perhaps to God.  He is forlorn, lost, meandering and, at best, seeking answers to questions he’s always wanted to ask.

Anton Chekov’s Uncle Vanya is as timeless as anything by Shakespeare or Homer and it is the latest venture of Austin’s own Breaking String theater troupe.  The group led by Co-Producing Artistic Directors Liz Fisher, Robert Matney, Matt Radford, and Graham Schmidt, concentrates on Russian drama both classic and contemporary. They have already tackled Chekov’s The Seagull and The Cherry Orchard.  Director Graham Schmidt crafted a new translation into English for each of the three.

Why re-translate works that have been translated many times before?  Schmidt believes retranslating during the performance process lends a certain immediacy to the actor’s performance. “In this way, they feel they can take a new work approach to a classic play.”

Allow me to illustrate.  An earlier translation contains the following line:

“This wonderful feeling of mine will be wasted and lost as a ray of sunlight is lost that falls into a dark chasm, and my life will go with it.”

In the Breaking String production, the same line is fired off with greater clarity and poignancy:

“My feelings are fading away like sunbeams into a pit.”

The emotive plea of the character rings out quickly and sharply, stripping away unnecessary diction and poetic prose.

Yet, a lively and direct translation is just one of the few things this production has to offer.  The set design and the lighting are bewitching.  Breaking String transforms the austere confines of the Off Center into a virtual diorama of the life of the Russian nobility of the 1890’s.  Straw-strewn floors, rough wooden walls, lightning storms just outside the window, a well placed samovar and a cylinder phonograph join together to create the atmosphere of a time gone by.

Matt Radford as the tree-loving country doctor Astrov is a stand-out of comic timing. His sighs, blank stares, and controlled outbursts delineate a character who has simultaneously been shoved away from society and fled for its edges. He wants to be alone and yet will never be able to shun society. He’s a Russian Thoreau with a severe addiction to the drawing room.

Robert Matney’s Uncle Vanya charms everyone on the stage (and in the audience) but himself.  His individual despair is all at once gripping, monstrous, and refined and therefore hilarious. Like watching a friend trip so badly that you know he has hurt himself but you can’t help but laugh.

Liz Fisher portrays Yelena Serebryako, the 27-year-old second wife of a retired professor.  In a way, her character is a metaphor for the entire play: a beautiful butterfly trapped between two panes of glass whilst still alive.  She is anything but recalcitrant.  She complains of boredom with a lilt of interest in her voice: she shouts down pursuers with a finality that entices further action and she walks across the room with a restrained silence that demands attention.

Emily Everedge’s character Sofia embodies trust, hope, faith, and acceptance in ways that make exceedingly clear the exact differences among each of those states of being.  As she progresses through the night, her character is emotionally bludgeoned on all sides and you can read every nuance on her face.  Her voice trills with desperation and desire but nonetheless she mirrors the play’s philosophical exposition and denouement on her countenance with severity, precision, and grace.

Since most of the play’s “action” is empathic and personally revelatory, I have not focused on it much in this piece. A plot summary is as unnecessary here as an explanation of the factors contributing to a car accident.  The worst has happened and all we need to do is witness the results and reactions to the wreckage.  As in Joyce’s Ulysses, everything that has preceded and everything that will happen next can be inferred from the events of a single day.  The characters are neither predestined nor trapped in a cultural or familial box, they are not cursed or baited along by an unseen omniscient force: they are merely awaking to a life they have just discovered and have always lived.

Review by Barry Pineo for the Austin Chronicle, June 30

Click to view the program for Breaking String's Uncle Vanya 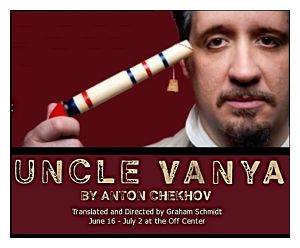