The fact that the sport has not spread beyond our country, unlike those other great American pastimes baseball and basketball, suggests that the Saturday and Sunday gridiron kabuki says something unique about the American mentality.

A writer in The Economist once called it “the quintessential sport of the United States – a combination of committee work and violence.”

Writer/actor/self-director Shannon McCormick has a keen eye for the characters and the conventions of this national sport, and he shows both understanding and great affection for them.  Plus he is energetic and well-toned enough to make the audience believe that he is, in turns, a crotchety coach ready for retirement, a quarterback with a zen imagination, a star self-loving black pass receiver, and a 350-pound Christian defensive lineman. And more.

McCormick’s astounding mimetism is well reinforced by some very spiffy video, graphics and the original music by Graham Reynolds.

McCormick’s promotions for this event, on KUT FM, in the printed press, and on line, stress that no two shows are alike. There is a shuffling of texts and outcomes, appropriately enough, via audible cues, and he adapts in order to move the story ahead. Maybe so; but that random walk was not obvious in last night’s performance, which was smooth, continuous and convincing, even to the detail of the appropriate surge of crowd noises reverberating in the theatre.

You enter the theatre to find video projected onto a chalkboard, with a series of nifty “Did You Know That. . . “ Qs and As, providing spectators with trivia and factoids about the mythical Professional Football League (PFL). The 20 or so items, some of them patently absurd, cycle a couple of times, interrupted by video ads.

If one doesn’t simply tune them out as so much visual noise, they give us the setting: the Omaha Oxen professional football team are playing in the Ultima Bowl. The Van Pie brothers are the quarterbacks, one on either team. There’s a receiver with the Oxen, Coleco Baggins, who styles himself as “the fastest mammal alive, except maybe for a cheetah.” The Oxen are unbeaten.

The intro video (available on the Salvage Vanguard site) plays, the music thunders, and McCormick appears, in the persona of the Oxen’s coach, a vulgar, foul-mouthed football zealot whose obscenity was so strong that it brought yelps of laughter from the Free Night of Theatre crowd.

The coach sets the stage for us with his vindictive, small-minded insistence on redemption through victory. And then McCormick cycles through his other characters, bringing us a very different set of views. 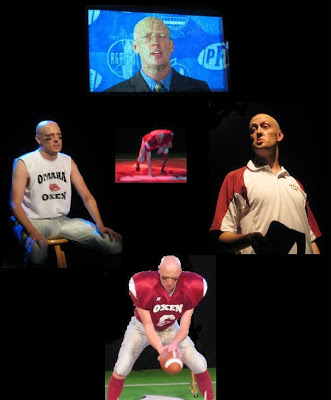 McCormick is an astonishingly versatile actor, particularly in his use of language and accent. Van Pie the quarterback is your vanilla All-American; Coleco Baggins the receiver is a hopped-up, gregarious, flirtatious African American; the team’s kicker is a fatalist from the wilds of Wisconsin with a spot-on “for sure” accent; the football commissioner is the bureaucrat blinding you with bullshit; the gay pass receiver glories in his receptions and mocks testosterone with moves worthy of a cheerleader; the Oxen’s Fan #1 is an exuberant idiot celebrant with no life of his own.

McCormick charms the crowd, interacts with them, responds to them. In one chilling moment, he stops front and center in a spotlight to deliver “the unheard voice between the coach’s ears” with the message that we all lose, eventually, and eventually we all lose everything.

The hypothesis of the show is so happily outrageous. McCormick gives us the Ultima Bowl, quarter by quarter, including a video mess for halftime.

The score rises stratospherically – on Thursday night, in the third quarter it was Oxen 84, opponents 74, and then the opponents pulled ahead. The Oxen got the ball back with a scant minute left to play. . . .

The absurdity of the imaginary world pulls us one way – after all, the football commissioner confesses that cheating brought about many of the outcomes, and the opponents stage the stunt of putting a bear on the field for kickoff defense.

And yet, McCormick pegs these characters so well, with such insight and authenticity that they dominate and overcome the satire.

The Wisconsin kicker tells us dolefully, “After all, when they bring me on, it’s because they failed, they didn’t make the first down or the touchdown. . . .”  The offensive lineman speaks with painful sincerity about his Christian faith and his “mandicrafts,” which include needlepoint gifts. The star receiver pumps us up and flatters us and tells about his ambitions for his career after football. And the quarterback, faced with victory over his brother or defeat, remembers Mom, who is watching from the stands.

So that instead of just laughing and sneering at the artificial theatre of the great, uniquely American game, we gain a piercing view into the motivations and vulnerabilities of those who play it. 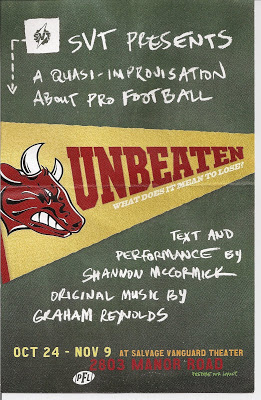