Review: The Taming of the Shrew by The City Theatre Company
by Michael Meigs

This presentation of Taming of the Shrew is a gem.

So I was baffled to find that on Friday night this company of a dozen talented and attractive actors was performing before an audience totaling only 16 persons.

Why hasn't the word gone out? This is the second weekend of five, and given the quality of the show, the place should be packed. I spent $25 for the "reserved' seats, even though tix are regularly $15 and $20 (only $12 for students). And I was embarrassed to find that our two seats in the middle of the second row were the only ones with the "reserved" hoods on them. Made me feel like a Viceroy or Bwana Jim.

This is only the group's second season, granted. And they're not easy to find -- we were driving around for a while in the vicinity of Manor Road and Airport Road before we finally spotted them, in that obscure little row of storefronts up behind the Shell station. And maybe that photo of the muzzled Kate is suggesting not a good time, but a rather a scary film.

No matter. If you like Shakespeare, if you enjoy a knockabout farce with personable young actors, if you want to see new opportunities for this promising company, GO. See this show!

The Taming of the Shrew, with its 400-year-old attitudes toward conflicts between the sexes, arranged marriages, and humilliation by slapstick, can be a guilty pleasure.

As early as 1897, George Bernard Shaw wrote, “No man with any decency of feeling can sit [The Taming of the Shrew] out in the company of a woman without being extremely ashamed of the lord-of-creation moral implied in the wager and the speech put into the woman’s own mouth.”

The City Theatre acknowledges this in the stage notes: ". . .modern interpretation of the play is sometimes complicated by the centrality to the play of issues that are hotly debated in our own time -- in particular, the question of what roles men and women can and should play in society and in relation to each other. Is Petruchio a loving husband who teaches his maladjusted bride to find happiness in marriage, or is he a clever bully who forces her to bow to his will?" [Three more rhetorical questions follow.]"Our own answers to these questions may have less to do with the play iteself than with our attiudes towards the issues and ideas it explores."

End of discussion. Talk about begging the question! 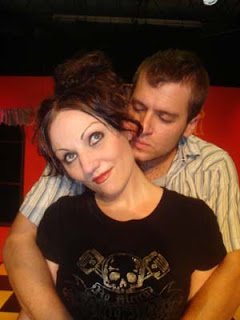 So director Jeff Hinkle of Concordia University and his cast make no apology for giving us a bang-up comedy that avoids the politically correct. They offer us a vividly credible curs'd Kate (Dawn Erin) and her tamer Petruchio (David Meissner), set off by straight romantics sister Bianca (Kristen Bowden) and her suitor-disguised-as-tutor Lucentio (Benjamin Right). They are accompanied by a full gallery of cartoonish characters.

For example, totally over the top: Petruchio's man Grumio (Jason Marlett) bounds in, making nutty martial arts moves that recall Keito, the madcap manservant of Inspector Clouseau in The Pink Panther. Rival suitors to Bianca are Gremio (Marcus Lorenzo) as a dimwitted sincere "homeboy" and Hortensio (Marco Bazan), lean, mobile-faced and pouty -- much of the time in a Rapunzel-blonde wig.

We can go with the concept, especially since Petruchio (Meissner) comes across not as a lout, but as a cheery, talkative muscular guy who could be a college quarterback. He employs against Kate primarily his wit, charm and decisiveness, rather than violence. His restraint with her is underlined by his very physical cartoon-style mistreatment of serving man Grumio.

The cast brings us very close to the action. When themembers of the audience take their seats, they find themselves in the courtyard of "Baptista's Burgers," with a five-star menu tucked in the program. The sisters, as yet undifferentiated for us, ask us for our orders, informing us that despite the elaborate menu, only cheeseburgers are available. Some of us begged off ("just ate, sorry") and others took the bait.

"Cheeseburger!" call out the sisters. "Cheeseburger! Cheeseburger!" Through a window in the set the portly Baptista (Robert Dietz) yells back, "Cheeseburger!" each time. He produces, one after another, saucers with silver-dollar sized cheeseburgers. The tattooed Kate and the demure Bianca deliver them to the audience. This clever gambit breaks down the separation between actor and audience. It leaves us momentarily disconcerted and then very amused, even before the action begins.

What terrific mastery of language these players give us! They speak the speeches with clarity, precision and ease. Without an exception they deliver their lines with whip-sharp timing. The comedy bounds and rebounds.

Special recognition goes to Robert Deike as Baptista the father, a monument of befuddled calm amid all this movement.

Dawn Erin as Katerina is a pleasure throughout. She is tough, angry, distrustful, frustrated, andultimately triumphant. Though she bends to Petruchio's will, we have no sense that her spirit has been subdued. She sizzles. . . initially with anger and later with passion for her husband Petruchio.

NOTE. The Shakespeare Company in Washington DC presented The Taming of the Shrew in late 2007. Their website includes several articles relevant for consideration of that presentation and this one, as well as a podcast:

The Taming of the Shrew
by William Shakespeare
City Theatre Company