Review: The Odd Couple by The City Theatre Company
by David Glen Robinson

Putting together a theatre season boils down to nothing but choices, and for eight years Austin's City Theatre has created worlds of delight for theatergoers. Earlier this season the company gave us the uproarious Steel Magnolias by Robert Harling, as evergreen as Christmas and Hanukkah, and The Whipping Man by Matthew Lopez, a drama that taught us that every being seeks his own Promised Land. 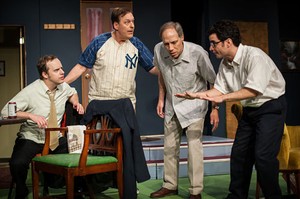 Neil Simon’s The Odd Couple, City's current production, is famous for the high ratings on the laugh-o-meter generated by least-common-denominator gags.  Television executives snapped the property up for the network TV sitcom with Tony Randall and Jack Klugman that ran for five years in the 1970's.

Is The Odd Couple a descent from the heights of the current City Theatre season?

It’s more like a freefall for seven days and seven nights into an ocean of diet soda, where not even the Australian Air Force can find the wreckage.

But nothing succeeds like success and a laugh is a laugh.  Further proof of those well-illustrated bromides is the fact that The Odd Couple has been pleasing SRO crowds at City Theatre throughout its run. Success like this deserves some respect. And it's true that Simon had a knack for writing low-brow jokes of immensely wide appeal. 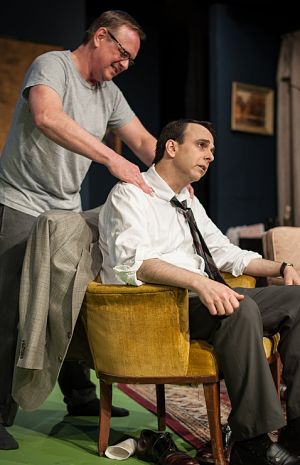 City Theatre's competent cast flies slowly through the well-known world of Oscar and Felix, two post-marriage single men who vex their poker group with their travails. Does the plot make sense? Of course not. The entire two and a half hours of these characters’ lives on stage amounts to a vehicle for rapid-fire jokes, japes, and sight gags for the churning of still more punchlines.

One of the now evident secrets of Simon’s continuing appeal is his undatable subject matter. What could be more timeless than poker games, food, phone calls, odors, girlfriends, obesity, and sports? The throwing of objects is always a laugh—a deck of cards, a plate with a pickle on it, a plate of spaghetti (oops, no, sorry: linguini), and a couch cushion that goes out the 12th story window. Only a little of the physical humor was notably dated, as when a couple of jokes were played with entanglements with phone cords.

Tellingly, the 1965 play makes no references, humorous or otherwise, to LBJ, Vietnam, the space race, the draft, the civil rights movement, or military interventions. Acknowledgment goes to director Karen Sneed for making almost no attempt at a period The Odd Couple other than the period-authentic toe-tapping house music designed by Carl Ziegler and those awful faux-bouffant hairstyles on the Pidgeon sisters from upstairs, a wickedly beautiful touch that nobody under age 60 got.

Special credit goes to stage running crew members Tammy Davis and Dave Westenbarger, who efficiently redressed the set during both intermissions and a mid-play set change from Oscar-filthy to Felix-shiny and all degrees in between. The set by producing artistic director Andy Berkovsky provided an appealing depiction of a comfortable Riverside Drive apartment in NYC, although one with an odd chink at center stage through which one could see a character in the exterior hallway. 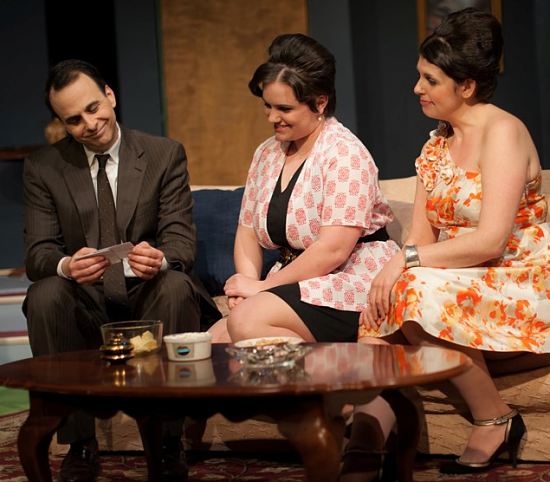 Scot Friedman successfully conveyed the introverted, sensitive and disturbed Felix, giving him a quietness to contrast with the loud boisterousness of Oscar. Rick Smith as the megaphonic, slovenly Oscar took to his character with a knowing hand, showing us the Oscar within us all. I shall never again be ashamed to take off my pants in public before reclining on a couch.

Most audiences for The Odd Couple over the generations would have demanded their money back were it not for Simon’s deft demonstration of contradictions: the sensitive Felix is a past master of passive aggression and the  loutish, alcohol-swilling Oscar affectionately embraces all around him--his family, poker circle, neighbors, and even Felix.

The Odd Couple will do much to help pay the bills and keep the City Theatre doors open in our straitened times. Kudos and encouragement go to City Theatre and all our local theatres as they earn their revenue the hard way—one ticket purchase at a time. 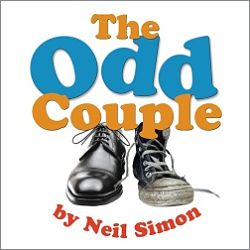