Review: The Method Gun by Rude Mechs
by Michael Meigs

So what, exactly, is the Method Gun?

That piece of hardware is a gun, but it's not The Method Gun except in a very minor, representational way.

The ensemble makes us at home for the show, opening the house early and providing piano music, a compendium of sentimental ballads keyed out carefully by a cast member. "Stardust," "Red Sails in the Sunset, "Alfie," "I Will Wait for You," pieces relatively appropriate for the early 1970s setting of the action, played about as well as I might play them after 30 years away from the keyboard.

Tall, bearded Thomas Graves tells us that the group has done research on the "famous" teacher of acting Stella Burden, disappeared from her company while in South America in 1973. Her intense company of devotees had been rehearsing a version of Tennessee Williams' A Streetcar Named Desire played entirely without Stella or Stanley or several other main characters. They remained so fixated on her project that they continued it for another nine years, apparently without ever getting it onto the stage. 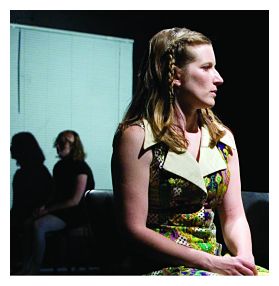 Thus begins an evening of curiously overlapping realities. We have the real, individual actors in front of us ("Tonight is Hannah Kenah's 30th birthday!"), the Rude Mechs as the alleged investigating company, and the resurrected, re-enacted fictitious troupe around Stella Burden, who never appears. 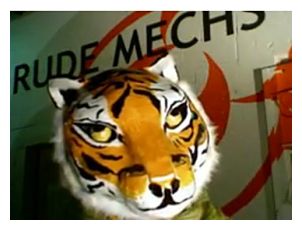 And The Tiger, a South American deus-ex-machina djin who materializes periodically to comment upon the action, contemplate the nature of tigers, and promise that one of these juicy actors is going to serve as a meal.

The Mechs hold to the South American story, though it's clear that their "Stella Burden" is an avatar of real life acting teacher Stella Adler. Adler was a student of Stanislavsky, a star in her own right, and a teacher of many, including Marlon Brando. There you have a connection with Streetcar. Another clue is fictitious Stella's instructional technique, "The Approach." Stella Adler's contemporary and rival Lee Strasburg advocated "The Method," based upon Stanislavsky's early technique of recalling one's own emotions to give substance to the fictional character. Stella Adler, in contrast, insisted that one's own experience is too shallow. Instead, she taught, the actor studies the text so as to believe in the emotional circumstances and generate a performance of depth and conviction.
What we get during this captivating and confusing evening is a collection of scenes by writer Kirk Lynn and the Mechs that plausibly might have grown out of the alleged collaborative workshop process described in the program.

The Rude Mechs include helpful excerpts from acting texts, one with instructions on stage embraces and kisses and the other describing "rasaboxes," the Actors' Studio improvisational technique of engendering and applying any of nine defined emotional states. They do repeated takes of scenes from Streetcar, playing the minor characters and at times addressing the invisible, deleted major characters. Each time through, they alter the scene, successively stripping out actions, characters or actors. 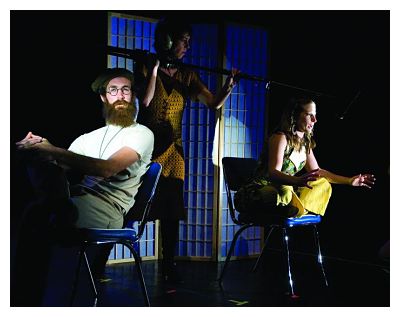 We get the anguished meditations of the fictitious members of Stella Burden's fictitious troupe, channeled and voiced directly ("She asked me a single question at the audition: if you had to choose between truth and beauty, which would you choose?").   Or enacted as the television interview, years later, of one fictitious, Burdened actor. Stella Burden's final, definitive instructions are revealed in a letter read onstage as it is consumed by fire. And the talkative, gnomic Tiger eventually selects his victim ("I can't help it. I'm a Tiger!")

Some of the action is emotionally wrenching. The signature is "the crying exercise," in which all troupe members silently face the audience, virtually without moving, during an interval measured by a kitchen timer, evoking and manifesting grief and weeping. The audience is trapped in its subtle contract with the actors, identifying with them and sympathizing as they enact a phalanx of rising misery. 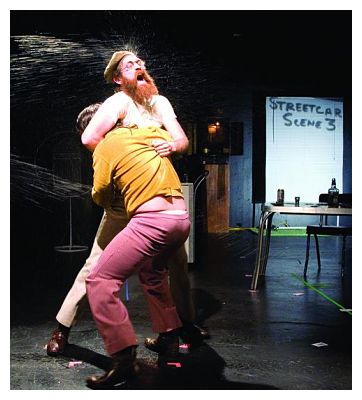 Other exercises are physical and more overtly entertaining. These include stage business from Streetcar, physical confrontations between Streetcar characters or between members of the acting troupe, and a naked promenade with balloons. Under the intense discipline imposed by Shawn Sides' direction, the physical business eventually culminates in an adroitly staged compendium of earlier actions, fights, dance and mime, all in a space intersected by hypnotic swinging pendulums. This scene, which drives the action toward a climax, reminds one of the dangerous physicality of some numbers of the famously eerie Cirque du Soleil.

All to what end and with what meaning? Despite the earlier tease, we do not discover the fate of Stella Burden. The acting company, all but one, lives onward in our imaginations, unresolved and uncomprehending. The Tiger, having accomplished his promised tigerish goal, disappears. The company leaves us suspended in its cloud of questions.

The primary satisfaction of The Method Gun is the privilege of being admitted into the company of the actors as they explore this enigmatic mess. Hannah Kenah, Thomas Graves, Lana Lesley, Jude Hickey and Heather Hanna are vivid, focused and attractive. We experience deep vicarious emotions with them, and we consciously open ourselves to the effects of their avowed and pre-announced acting techniques.


The action does not arrive at explanation of the fate of Stella Burden or offer any account of the lives of her actors beyond the nine years they remained stuck to the flypaper of her technique. Instead, the focus might best be described with the title of Stanislavsky's famous book: An Actor Prepares.

The Method Gun, credited to Kirk Lynn, presents itself as the self-indulgent workshopped demonstration of the actor's art -- but it is all the more gripping for that. In it, Streetcar is truncated and progressively reduced, perhaps in order to illustrate the contribution of each individual actor. Instead of viewing the ensemble, or even remaining with the "two-scene" between minor characters, we arrive eventually at the totally stripped-down version: a single actor in struggle as a single character at a single moment of emotional intensity. This is sacrifice for art to the
point of absurdity. That theme illustrated even more incongruously by Graves and Hickey in their promenade with balloons. The actor is ultimately exposed and alone, without the assistance or the Burden of any director, guide or coach. 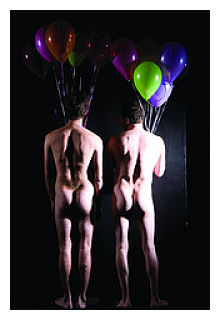 As for the Method Gun itself. . . the gun does go off, as expected, and as also might be expected, the result is ambiguous.
I could suggest another interpretation. The art of acting in live theatre is dangerous and alluring, especially in a society that turns less and less frequently to the celebration of that collective and colloborate art. To venture onstage is to take a great risk. As in Russian Roulette -- the artist spins the chamber once again and lifts the Method Gun to see what the effect will be.

[All photos (c) by Brett Brookshire]
Review by Heather Barfield Cole on www.vividstage.com, April 15
Review by Dan Solomon on Austinist.com, April 16
Review by Ryan E. Johnson on Austin.com, April 21
Review by Rob Faubion in the "Working the Room" blog at Austinonstage.com, April 23
Interview of Lana Lesley by AustinOnStage.com: "EXCLUSIVE: Lana Lesley Talks About the Process of Developing Rude Mechs’ The Method Gun"
Review by Wayne Alan Brenner in the Austin Chronicle of April 30
MP3 Podcast of Rude Mechs discussing Method Gun and I've Never Been So Happy, etc. with Stage Directions Magazine (30 min.)
EXTRA!  Click image below for excerpts fromthe program for The Method Gun 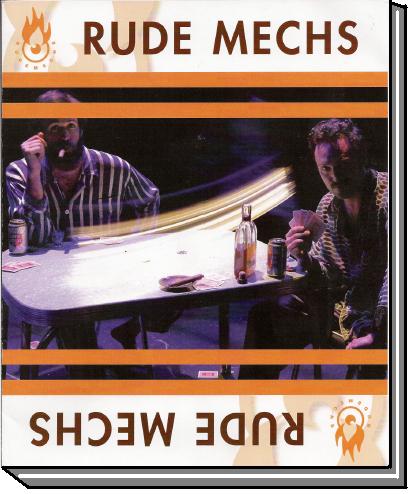 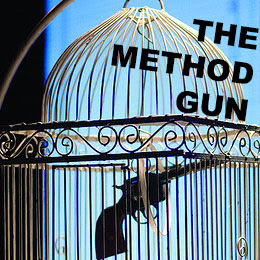