Review: The Insomniacs' Ball by Chris Fontanes
by Michael Meigs

Theatre, in the concept of this website, isn't an industry or an institution. It's a way of experiencing and reporting the world, a collaborative effort to explore what's important to us now, at this moment in history and at this time in our lives.

The power of mimesis lends itself to large scale commercial presentation, including on screen and in extravagant live entertainments ("Razzle-dazzle 'em," as Billy Flynn advises Roxy in Kander and Ebb's Chicago). But it can enlighten us, artists and audience alike, even more in intimate settings. One of the enduring pleasures of Austin theatre is the possibility of physical proximity to performance (I'm always looking for a front-row seat and I'm rarely disappointed); another is the rich churning of new works and new theatre groups.

For the past 2 1/2 years Chris Fontanes and associates in the Bottle Alley Theatre Company have been quietly, methodically crafting intimate theatre art.  They've scouted out a succession of low-cost and improvised venues, starting back in 2012 with a punk-rock warehouse venue. For Fontanes' four-character piece The Insomniacs' Ball they got lucky and secured a private house in the heart of 78704 both for rehearsals and for two weekends of performances.

Low-budget theatre doesn't mean low-quality theatre, but often enough it presents unexpected surprises.  The show poster circulated last November announced performances at 7:30 p.m., but when I arrived at 7:20 I discovered that I was a couple of minutes in advance of the arriving actors.  Playwright/director Fontanes, surprised, asked me to return at 8.  When I arrived at 7:55 he told me with an apologetic grimace that they were still setting up.  I lingered for a couple of minutes out on the sidewalk and then was admitted with great thoughtfulness and courtesy.  I was given a playing card "for later" and settled into my seat against the wall. Three bedraggled individuals were listlessly playing what seemed to be poker on a round table in the center of the shadowy room; one woman, inexplicably wearing a mask, put her head down on the table and went to sleep.  As another fifteen or twenty minutes passed  a handful of other persons trickled into the room and were given seats, like mine, along the periphery.

Bottle Alley neatly busted the conventions of theatre timing.  When Ariel Gilman pushed back from the table with an exasperated sigh, she also busted the convention of presence, addressing us directly with a sour acknowledgement of the usual convention of the fourth wall.  For an uncertain moment it seemed as if there might be some more-than-front-row encounter coming up, but she went on to speak in character of her own moody preoccupations. The fourth wall -- or, in this setting, the circular enclosure -- closed again.

The scenario that emerged: this was a weekly card game, always late at night. Four characters (unnamed) were accustomed to meeting and playing through the night. Two, played by Ariel Gilman and Justin West, had been married but were now divorced, and they'd decided to alternate weeks at the card game, in an arrangement somewhat like shared custody of non-existent children. It was Gilman's night, but West, mute and apparently lonely, turned up anyway. Tim Olivares, a deadpan poker player with a broad Texas accent, revealed he'd been diagnosed with an inoperable brain tumor and hadn't bothered to do anything about it. The masked Amber Hales spoke of a life of frustration, as if her little boat of life had sunk into the doldrums on a very wide and barren sea.

Playwright Fontanes created a script for these four that was essentially a collection of rambling monologues. Most of the time they talked past one another, musing aloud and addressing the invisible air, occasionally wandering about the room.  The rhythms were muted, slow, contemplative. We in the audience had returned to our fly-on-the-wall status.  In the course of the hour with these attractive and quietly intense young adults, it became apparent that Fontanes had given women characters more to work with than their male counterparts. Gilman spoke with languid disdain, especially when dismissing her ex-; Hales came across as a dark knot of emotion and frustration.  Poker player Olivares was pretty much finished once he'd told his story about the possibly imaginary tumor that shocked no one. Justin West had little to say but maintained a guarded surveillance of his ex-wife played by Gilman.

The late sleepless night breathed not of angst but of ennui. The game at the table with its messy piles of poker chips and array of empty beer bottles became an unexploited metaphor for these characters' lives. They went through the motions, indifferent to the outcome, paying little heed to others or to what they had to say.

With the technique of monologues-past-the-ears-of-the-other-characters Fontanes made an existential point but failed to exploit some of the potential of the imagined situation. For example, we flies on the wall heard very little from Gilman and West about their lives together, their clashes or their attempts to deal with each other. Any marriage is a crowded circus of incident, but these two seemed to have had their minds and memories wiped clean. Likewise with Olivares and Hales, both floating in the present moment.

Hales turned to us, pushing aside that imagined invisible curtain, and invited us to pick up our playing cards.  We followed her instructions and thereby implicitly assented to her summation of a decision that had been made.

In his millenial neo-Romantic script Fontanes does move his characters toward communion, if not toward hope or optimism. After lengthy quiet consideration, they left at separate times, two by two, out the front door of the house on their way to take comfort together.

Performances shall take place Friday, Saturday and Sunday evenings beginning on Friday, January 9th. Closing night is Sunday, January 18th. The house shall open at 7 and the show shall begin at 7:30. 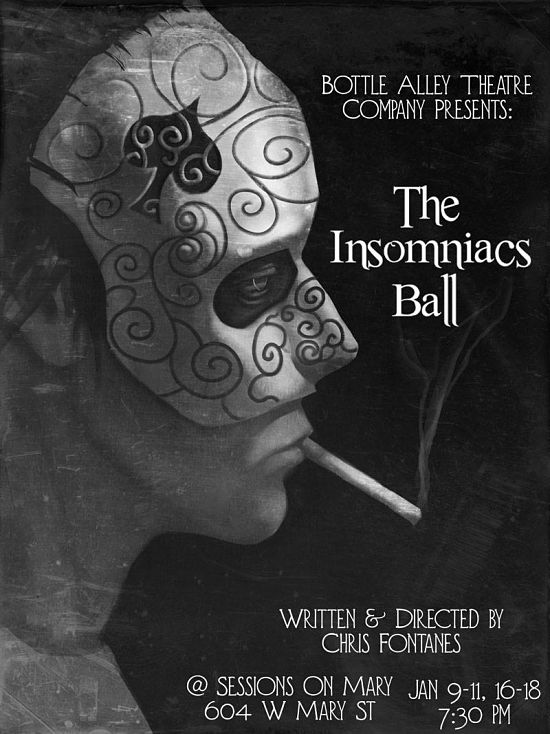