Review: The Fantasticks by Trinity Street Players
by Michael Meigs

The Trinity Street Players call the third-floor theatre space at the First Baptist Church "the black box theatre."  Now that I've attended three performances in that space, it seems to me that the appellation is a bit too generic.

"Black box" suggests a void, perhaps one that's wrapped in mystery.  A better reference for this long-running Theatre Ministry might be "jewel box." 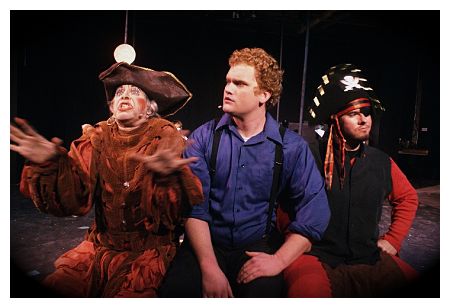 When we were living in Geneva, Switzerland, in the opening years of this 21st century, I took my adolescent daughter N with me for some special Christmas shopping.  We went to Gobelins, the discreet high-priced dealer in jewelry and horlogerie at the Rue de Rive.  In addition to their displays of the newest and most sparkling, Gobelins maintains a binder describing  "heritage jewelry" for sale.  With an appointment and a few days of advance notice, one can view a chosen assortment of previously-owned pieces.   In that seance in early December, with my daughter's approval, in a heart-stopping moment I picked out a beautiful, classic Christmas present for my wife K.

That, approximately, is what the Trinity Street Players are about.  In their third-floor space at the First Baptist Church on Trinity Street, they have been preparing and performing with discernment, discretion and style a selection of some of the best, most solid, traditional, high-value items of English language theatre.  Assistant director David McCullars enticed me to their Steel Magnolias last year; I reveled in their You Can't Take It With You earlier this year; they are holding auditions on August 28  for the November production of Shadowlands, the play by William Nicholson based on the marriage of C.S. Lewis and Joy Gresham.  McCullars will direct.

The Fantasticks fits solidly into that tradition.  The show written by UT alumni celebrates its 50th anniversary this year and it is the longest-running musical in New York.  In fact, UT is holding a two-day conference on October 15-16 to celebrate the anniversary, as well as staging its own production of The Fantasticks from October 15 - 24.   From an earlier conversation with Trinity Street player the Rev. Ann Pittman, I had the impression that the players hadn't been aware that UT was planning the bash.

Director Cathy Jones rose to the occasion in her pre-curtain remarks, marking the 50th anniversary.  That was diplomatic but unnecessary, because Trinity Street's attractive, gripping and musically sophisticated production of the show will stand up to any other that may come along. 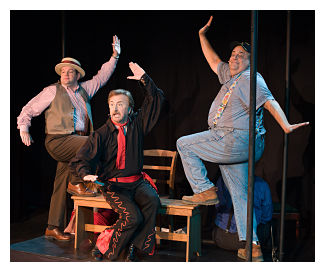 Part of the appeal of The Fantasticks is the simplicity of its concept. Boy and girl fall in love; their fathers pretend to oppose the match and hire "El Gallo," a bandit and merchant of dreams to give the boy his chance to be a hero.  Romance triumphs but gives way to unease. In the second act the boy ventures forth to explore the cruel world while the girl dallies with the mendacious El Gallo.  An eventual happy ending is tinged with the melancholy feel that life is more earnest and more difficult that the dreams of romance.  This action is wrapped in tunes that have become key in the musical theatre canon: Try to Remember, Soon It's Gonna Rain, and I Can See It, to name only the most evident.

Cathy Jones recruited experienced, charismatic players for this show.  Joe Penrod, playing the cynical El Gallo, is one of my favorites on the Austin musical stage.  Justin Langford, playing the earnest, naive young man, appeared with Penrod  in Man of La Mancha at the Georgetown Palace, capturing our attention with his pure tenor.

The Fantasticks features several pairs -- the boy and girl, the fathers and the traveling thespians Henry and Mortimer -- but for me this production was anchored by Langford and Penrod.  They are  innocence and experience, ambition and accommodation, the before and after of growing up.  Those contrasts are captured in electric fashion in their second-act duet Beyond That Road/I Can See It.  That number begins in counterpoint, with the characters apparently unaware of one another.  As the boy is striking out on his own, the older man offers warnings in a moody minor key along with a grim prediction,  "He's liable to find a couple of surprises there."  Langford and the magic-fingered small orchestra build the response.  The boy sings of the road to "real life,"  sailing into an exultant "I can see it. . . ."  that captivates us and El Gallo, as well.  The two men finish in an exultant, sailing affirmation of the plunge into real life. 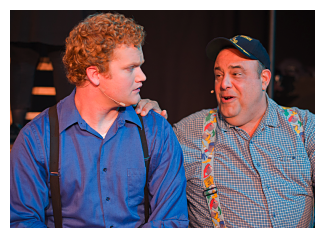 This attractive little show, minimal in props and effects but lively in music and clowning, played wonderfully well in the intimate, close-up space of that black box.  David Hammond and Carl Galante as the fathers were dapper and whimsical, a slim man/big man combination. Brooks Barr of St. Edward's University gave us a fine, befuddled old actor as the stiff-limbed Henry, fully capable of chewing the scenery if only there had been some and if only Henry could have remembered the right set of lines from Shakespeare.  Paul Webster as Mortimer, the actor specializing in dramatic death scenes, was cheerfully at home as second banana.  Meghan Zern as the mute was solemn, verging on severe.  I'd like to have seen more business for her and greater expressiveness. 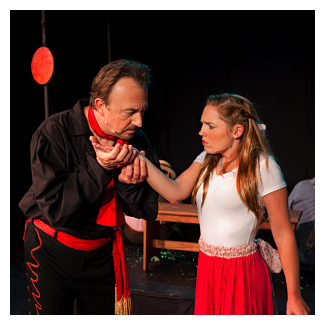 Langford and Ann Pittman as the young couple were neatly matched.  It made no difference that neither is a teenager, for with their stage confidence, ease and excellent voices they created a vivid picture of  the illusions and excitements of youth -- with a comic twist of gentle irony.

The musical level of this production of The Fantastickswas very high, both in the cast and in the orchestra led by Louise Avant.  The combination of keyboards (David Cappolino), harp (Natalie Teodori)and percussion (Bob Avant) gave a particular sparkle to the score.

They packed 'em in for their two-weekend run.  Of course, they were playing for free, or at least for donations, but the word of mouth must have been terrific. 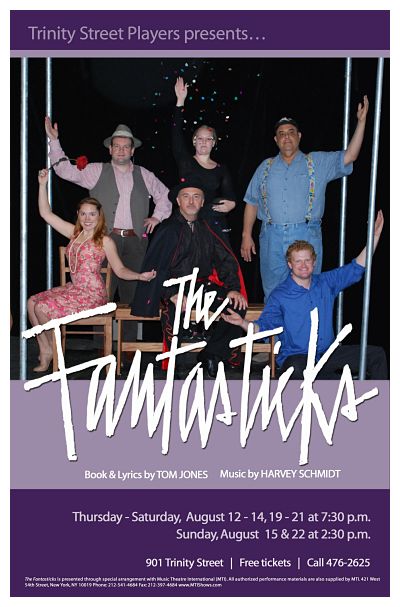