What is this quiet exhilaration I feel in the presence of Chekhov? Especially when the piece is as well played as this one?

For opening night at the Blue Theatre many of the seats were taken by young persons who might well have been undergraduates. Directly opposite me, across the three-quarter thrust of the playing space, one or two had spiral notebooks and pencils in hand.

I cannot recall if the vision of this end-of-the-19th-century Russian physician and author moved me so much at their age. Perhaps I was impressed principally by the exotic setting; the great but impoverished families of the Russian countryside were certainly alien to me. I probably liked the foolishness of some of the characters and admired Chekhov's women, who are simultaneously fragile and enduring.

But at university age I probably had a good deal of the unselfconscious arrogance that Mme Ranyevskaya so simply reproaches of Peter Trofimov, the eternal student who six years earlier was tutor to her son Grisha, before the boy drowned in the river:

"What truth? You see everything, you know where the truth is, but I’ve lost my sight. I can’t find my way. You stare down the hardest questions, but tell me, dear friend, could that be because you’re young? Because you’ve never lived, ever suffered through any of your hard questions? You  look to the future without fear, but could that be because you haven’t learned to expect anything frightening, because life is still hidden from your tender eyes?"

Now, several decades later, I am amused, perhaps a bit dismayed, to find myself resembling more closely Mme Ranyevskaya's brother Leonid Gaev, played by Ev Lunning, Jr. He's an idle but well-meaning billiards enthusiast easily tempted to pontificate over the trivial, including, for example, the hundred-year anniversary of the cabinet in the nursery. At least Leonid Gaev has the good sense to feel abashed when his nieces beg him, "Oh, do please stop, Uncle!"

All of Chekhov's major theatrical works are ensemble pieces. Families with their complexities, friends and neighbors who drop by and stay, servants who are proprietary of their employers, as if serfdom had never been banished. He gives us an intense sense of the everyday with its random conversation and dreams, seated in memory and in the flow of time. 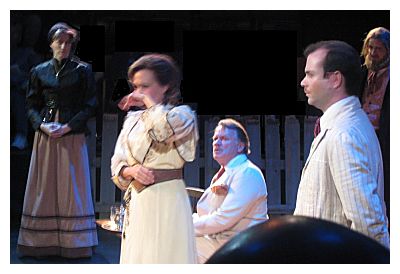 In The Cherry Orchard, daughter Anya (Robin Grace Thompson) has travelled to Paris to fetch home her mother from six years of unsuccessful search for solace. The play opens with their arrival, sometime in late spring -- the cherry blossoms are unaccountably in blossom, even though the weather is still at freezing. The estate is deeply in debt and the famous cherry orchard -- which even figures in the Encyclopedia -- is to be auctioned off in August. 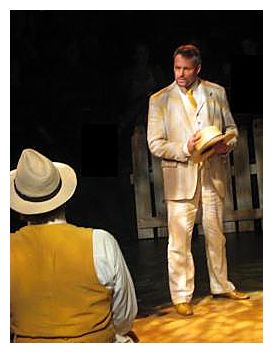 Following acts take place in summer, as the distracted family ignores proposals from the rustic businessman Lopakhin to subdivide the orchard to sell lots for holiday cottages, and in August on the day of the auction. Mme Ranyevskaya, ever heedless of expense, organizes a party with orchestra for that day. The cast wheels and dances in Andreá Smith's choreography as if the world were about to end -- which, in a sense, it is.

The final act takes place in October. The estate is gone. Family and friends are moving out of the boarded-up house, dispersing into their respective futures.

Many different approaches to this material are possible. It seems likely that the Soviet authorities stressed the decay and fall of the aristocracy and bourgeoisie, as well as student Trofimov's insistence on study, work and striving for the future. Yet Chekhov gives each of these characters a human face and a vulnerability, and he is telling so many stories simultaneously that his work resists such simplification. 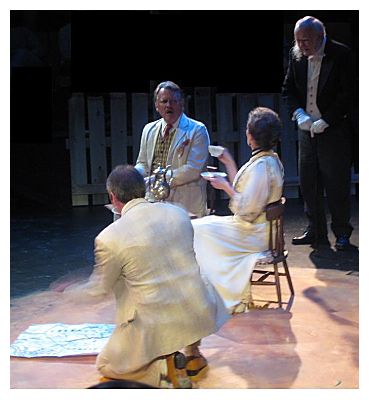 Babs George gives Mme Ranyevskaya a gentle, distracted air but portrays her in the confusion of deep emotion. Striving politely to bring her to reason is Matt Radford as businessman Lopakhin, self-conscious about his accent and lack of formal education. An early key scene occurs in the nursery on the day of return, as Lopakhin spreads out on the floor the map of his proposal for the orchard. She scarely looks at him or at the map. She twitters, bird-like, with her brother Leonid as the ancient servant Firs stands over them.

Director Graham Schmidt has made canny matches between Chekhov's vivid characters and the Austin acting talent happily available to him. For the quirky governess Charlotta, apt at prestidigitation and magic tricks, he has Bernadette Nason of quizzical mien and rich mid-European accent. Liz Fisher as adopted daughter Varya has all the seriousness and application that mother and sister lack.  She is tormented by the rumor that rustic Lopakhin will propose marriage to her and equally tormented by the possibility that he will not. 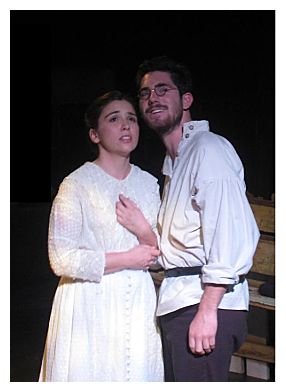 Sister Anya (Robin Grace Thompson) is sweet and beguiled by the certainities of that most certain student Trofimov (Nigel O'Hearn).

Opposite one another in the symbology of this piece are Sarah Gay as the stars-in-her-eyes young servant Dunyasha and Dirk Van Allen as the tottering 87-year-old Firs, who quietly caps the final scene as the axes are heard at work in the orchard.

The Blue Theatre provides a wide square playing area with raised and sharply raked seating on three sides of it. Director Schmidt and the cast are conscious of sightlines and of the acoustic difficulties of their tall, relatively bare space, but you will inevitably have the notion that you are missing some part of the action. Good advice: get there early enough to stake out first-row seats, in the center section, if possible. Better advice: see this evocative ensemble piece more than once.

Lighting by Jennifer Rogers and sets by Rommel Sulit are simple and functional. The cherry orchard itself exists in the mind's eye, not behind the actors but rather in their perspective somewhere behind audience in the center section. 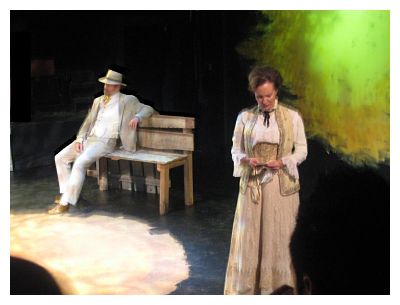 Adam Hilton's music and sound reinforce the action. He creates a haunting, disturbing moment near the end of Act II with, according to Chekhov's direction, "Suddenly, as if from the sky, the distant sound of a breaking string, dying away, mournful."

The Cherry Orchard plays only Thursdays, Fridays and Saturdays over three weekends. 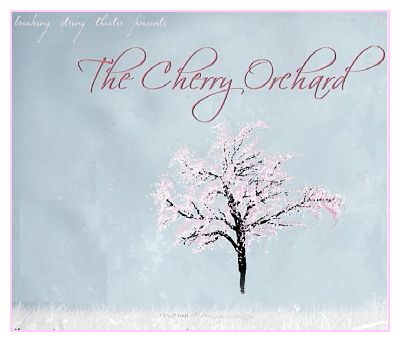