The greater Austin area hasn't lacked for productions of this 1988 farce by Neil Simon.  A search of AustinLiveTheatre.com brings back announcements of stagings by the Wimberley Players in September, 2009, by the Renaissance Guild in San Antonio in July, 2010, by Leander's Way Off Broadway Community Players in January of this year and even by UT's student-run Broccoli Project last March. That sequence resembles the systematic trial-and-error of artillery ranging, back and forth, close and far, until once all the coordinates are set, BAM! the shot goes home.  Home, in this case, being the City Theatre, one of Austin's liveliest and most entertaining theatre venues.

Simon was one of the twentieth century's most prolific writers for stage, big screen and small screen.  The Internet Movie Data Base lists 83 titles associated with him and its short title for his entry tabs him as the writer of The Odd Couple (1968).  Rumors is nowhere in that list, probably because its premise, timing and humor are pure stagecraft.  The audience witnesses the arrival of various couples in evening dress, one after another, all invited to celebrate the tenth anniversary of their friend and associate, Charlie Brock, Deputy Mayor of New York, and his wife Myra.  Problem: the kitchen staff is missing, the food hasn't been prepared, Myra has disappeared, and their friend Charlie is in a daze, having fired a pistol shot that took off his own earlobe.

They're trapped in a situation that surpasses their understanding. Equally baffled by these circumstances and equally confined in this box set, we watch each couple squirm, panic, bicker and try to cover up as others arrive.  Simon paces the arrivals and discoveries, and everything we learn of Charlie is third hand -- he's confused, he's crying, he's taking Valium, he's sleeping, he's unavailable to answer when the police come calling to inquire about a car accident, a car theft, and the reports of two shots in the night.

Director Andy Berkovsky establishes a wild popcorn-machine rhythm for Simon's gags, non sequiturs, wisecracks and revelations. It's classic farce, with some of the city's -- and the City's -- smartest and most attractive players for comedy.  Michelle Cheney and Wendy Zavaleta are together again, this time with a Lucy-and-Ethel dynamic, Michelle as the nutsy neurotic and Wendy as the feet-on-the-ground sarcastic cynic.  Scot Friedman as Ken the deputy mayor's accountant is stuck doing the baby sitting and eventually has to masquerade for the conked-out Charlie when the police arrive in Act II. Tony Salinas as Ernie the shrink has the quizzical look and comic timing that Sigmund Freud surely lacked, and Melinda Peinado as his wife Cookie the cooking show host is the foodie mama that anyone should be able to call in an emergency.  Rachel McGinnis is, for once, bitchy and jealous, while Daniel Sawtelle as her up-and-coming politician husband probably merits at least some of her reproaches.

We are delighted by the sight of all these privileged New Yorkers scrambling all over one another trying to hush up scandal and avoid getting involved, in the process of which they get in far over their heads.  Simon plots it tight and funny and with a surprise revelation ties it up neatly at the end. This is well-made theatre, in the twentieth-century sense, and Berkovsky and his cast not only make it work but visibly have great fun with it. 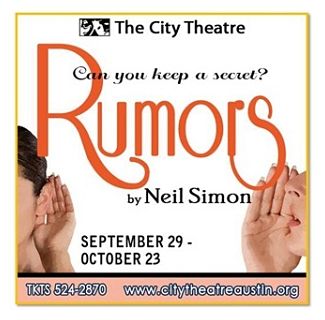