Review: Our Town by Trinity Street Players
by Michael Meigs

I'm still a bit out of kilter and pensive. Just days after Stage Manager Scot Friedman gave the audience his  confiding opening-night tour of Our Town, Grover's Corners, NH, we spent a weekend in St. Joseph, Michigan. An extended family clustered around three nonogenarian brothers as they went back to the scenes of their 1930s boyhood.

Their town's not a lot larger than Grover's Corners and it's equally well furnished with memories. 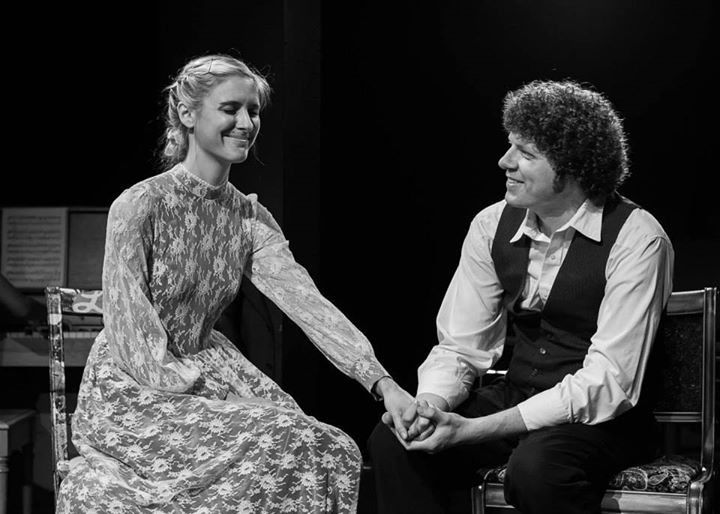 deceptive in its simplicity, a piece so folkloric and inoffensive that we studied it in my own high school English class year those many years ago. Its lessons are truisms, presented without complaint:

Pretty much everybody around here winds up married.

The living don't understand the miracle and wonder of daily life. Except the saints and the poets -- maybe they do, some.

Mothers and fathers let their children grow up but never stop worrying about them.

Grover's Corners, New Hampshire, The United States, North America, the Western Hemisphere, the world, the universe, the Mind of God -- and the postman delivered it just the same!

The Trinity Street Players draw on the strengths of community for this cast of 21, both those of First Baptist and those of the wider Austin theatre community. The black box up on the 4th floor of 901 Trinity Street brings the audience up close and around the action of the three acts and their themes of Daily Life, Love and Marriage, and Death and Dying. 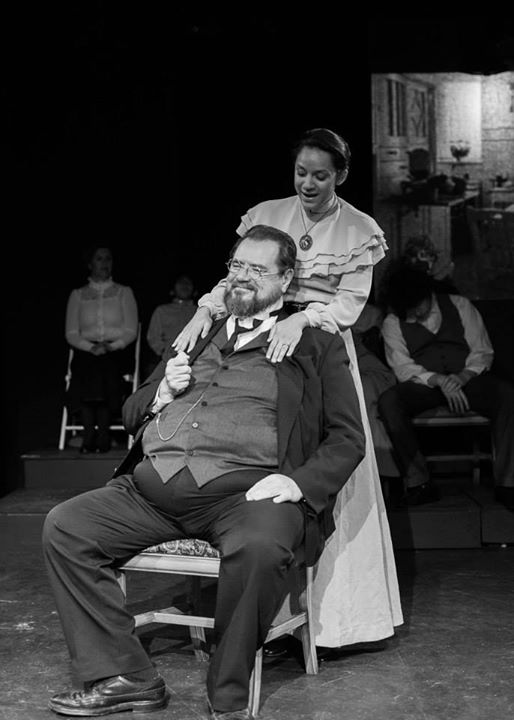 The Stage Manager is the organizer of our visit to three stops in time between 1901 and 1913.  Wilder uses him as chorus, director of the scenes and movement, and only occasionally as a minor character.  With his affable manner and running commentary Scot Friedman speaks both for the author and for us, the observers; director Manuel Zarate doesn't give him a pocket watch but instead has him check his smart phone for the time, the only evident anachronism of the staging.

Steve Williams and Circe Sturm are the Webb parents, and one of the most amusing scenes is their prospective son-in-law George's unannounced appearance in their kitchen early on the morning of the wedding day. LeRoy Nienow is a bemused baritone Doc Gibbs and LiAnne Valerio is busy, competent Julia Gibbs, as solid and warm a pair of parents as one could imagine.

The central line of Our Town is the story of the friendship, courtship, marriage and loss experienced by the couples' children. Kelsey Mazak is lean, earnest and emphatic as Emily, and Nate Dunaway delivers a standout performance that takes George Gibbs from heedless youth to adulthood and mature sorrow. 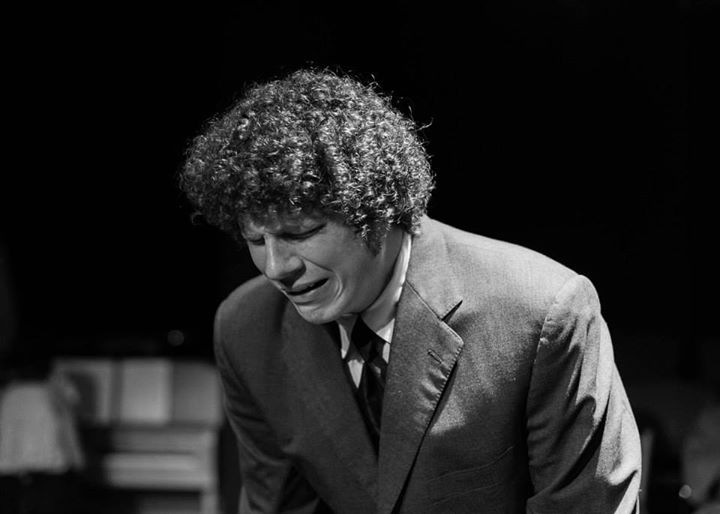 There are lots of other vivid characters along the way, casting unpredictability and color into the central narrative.  Memorable figures include Trey Deason as the morose, secretly drinking choirmaster Simon Stimson with his suppressed sharp edges and despair and Joe Grady Moore III as undertaker Joe Stoddard.

The music is a thoughtful treat. After the theatre's 'ghost light' is carried away young Daniel Meglino takes his place in a chair at center stage with a cello almost as big as he is, to provide us with a sonorous and near-melancholic Ode to Joy, beautifully accompanied by the expressions of intent concentration on his face. His sister Gelsomina accents the action on the piano with the quiet chromatics of Copland's Our Town and with rippling lines of classical violin music. 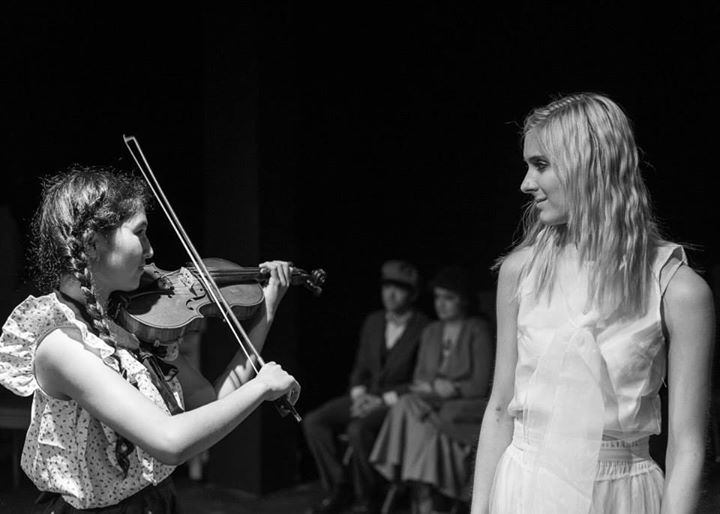 There's an awkward shift in the seating following Act I. Those entering the theatre see a cluster of paper notices on center seats in rows 1 through 4 and assume they're reserved. In fact, the notices in relatively small font offer you the opportunity to move with the chair in later acts. The thrust configuration will alter to a theatre-in-the-square and the space thus opened will become the locus for the wedding ceremony of Act II. The symbolism is evident and appropriate, for the ceremony then takes place in the heart of the audience, making us members of the community.  Unfortunately, about a third of us then have to twist around uncomfortably to take it in the decisive moments occuring behind us.

Trinity Street Players take us far away for the evening and at the same time they bring us back home.  I found myself unexpectedly called out when Friedman mused,

I'm awfully interested in how big things. . . begin. You know how it is: you're young and you make some decisions; then whissh! you're 70 and you've been a lawyer for 50 years, and that silver-haired lady at your side has eaten over 50,000 meals with you. How do such things begin?

How, indeed? Last week the three brothers in St. Joe illustrated those same issues while an energetic group of millenial descendants and in-laws shared their own adventures. We in the middle -- the senior middle -- looked in both directions, sensing how much things had changed and how much they'd remained the same. Thank you, Thornton Wilder; and thanks to Zarate and the Trinity Street Players cast for reminding us.

Trinity Street Players is committed to offering FREE art in the heart of Austin. Reserve your free seat online, or just show up at the door - we'll get you in! Remember, we're in downtown Austin on the 4th floor of First Baptist Church. Pay to park on the road or across the street in First Austin's parking garage at 9th and Trinity - enter on 9th Street. 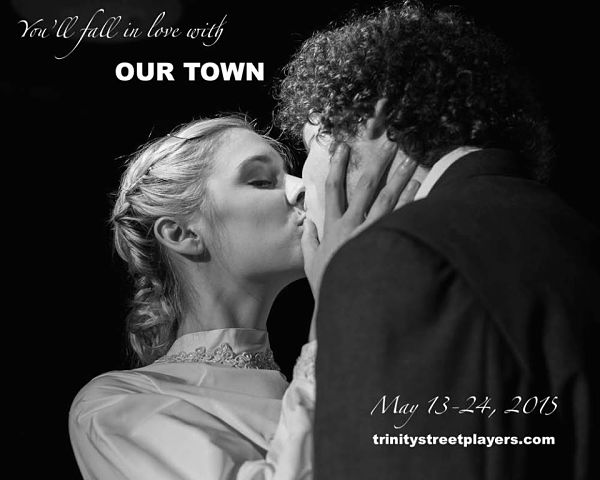