Review: Nunsense by The City Theatre Company
by Michael Meigs

This saucy, sparkling production of a popular favorite plays merrily with its basic premise: even if you're very, very good, you can laugh and dance to the joy of life.

Dan Goggin's idea is so simple that it started out as a line of greeting cards. Their immediate popularity prompted him to put his mischievous nuns on stage. He reworked a warmly received trial run (of 38 weeks!) into a longer piece that opened off Broadway in 1984 and then moved uptown for a ten-year run and 3,672 performances. Nunsense is the second-longest running Broadway musical -- surpassed only by The Fantasticks, also playing currently in Austin.  Nunsense has played in 26 languages and 6000 productions worldwide, with a combined cast of about 25,000 women.

The Georgetown Palace did the show last August. That production was perky, fun and well applauded. The City Theatre version now on stage has the same energy and good humor, in the up-close intimacy of a playing space seating only a quarter the size of the Palace. Andy Berkovsky's version borrows virtually nothing from the Palace, other than the most important feature of all: its leading Reverend Mother, Mary Regina, created by Melita McAtee. 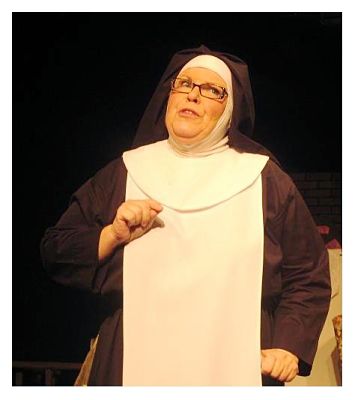 They won't tell you that in the program, of course, although her program bio comments slyly that "if she could play Mother Superior for the rest of her life, she says she would be delighted."

And so would her audiences. After her Palace performance I had an impression of her as kindly, towering figure. At the City I discovered my error. Melita McAtee is a towering personality, but in fact she is relatively petite. It's her self-assurance, warm voice, and matter-of-fact embrace of absurdity that give her the stature.

McAtee doesn't dance as well as Sister Mary Leo, she doesn't sing as well as Sister Mary Hubert (Dorothy Mays Clark), and she has none of the evident worldliness of Brooklynite Sister Robert Ann (Jennifer Coy). But she is as personable as the platonic concept of the best Mom ever. She displays equanimity in the face of disaster and a guileless delight at the world, captured at one private moment with us by a cute strut with a red parasol.

Goggin's plot is thin -- little more than an excuse to put these good natured good ladies onto the stage to tell jokes and to do a buck-and-wing. He pushes the contrasts right up to the edge of unbelievable absurdity when toward the end of Act I he puts into Reverend Mom's hands a vial of a curious white powder. McAtee has won our hearts by then, though, so she can play dizzy misadventure of the very pure Reverend Mom with clever wonder and a great build of physical comedy.

Part of the charm of Nunsense is that each successive production reminds us that the characters are not cookies always shaped from the same dough.  Actors mold these characters into distinctly new shapes. 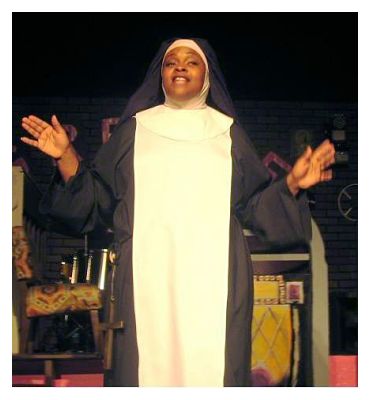 In this production Dorothy Mays Clark as Sister Mary Hubert,  Mistress of Novices, number two in seniority, patiently watches over the inner child of Reverend Mom and eventually reveals herself as a serenely confident singer of spiritual music. 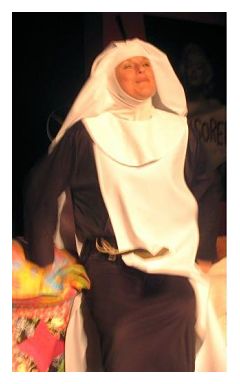 Glenna Bowman as the youngest sister, Mary Leo, glows with a spiritual grace equal to that she shows in her ballet.

Brash, confident, and ready to confide in the audience, Jennifer Coy as tough Sister Robert Anne is a crowd pleaser. Coy's New York accent is marked, convincing and not caricatured. One could imagine her equally as a fish monger or as the subway motorman on the 7th Avenue Express to Flatbush. 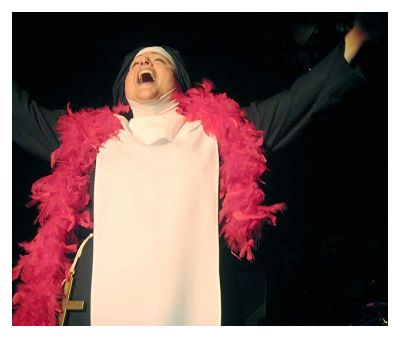 The running gag is that Sister Robert Anne is Reverend Mom's understudy, unlikely to be called forward despite her sharp sense of humor and her star appeal. Behind all the fun there's the satisfying assertion that talent will not, after all, be hidden under a bushel.

Particularly appealing is Michelle Cheney as Sister Mary Amnesia. Cheney is a clever, intelligent and adaptive actress. Playing the memory-deprived sister, she is dubious, absent, sincere and yet far away -- in impressive contrast to her crass, rowdy divorcée in The Shadow Box and her multiple fun characters in I Love You, You're Perfect, Now Change (both productions by North by Northwest Theatre Company). 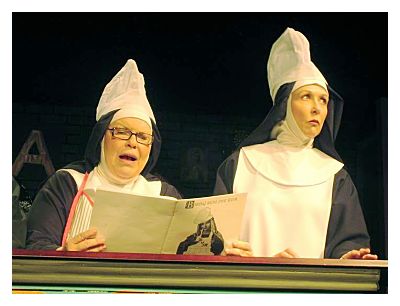 Cheney's delight in her puppet number, lovingly satirizing Reverend Mom, is contagious, particularly since her face reflects directly that of the puppet. She makes no attempt at ventriloquism, and none is needed. 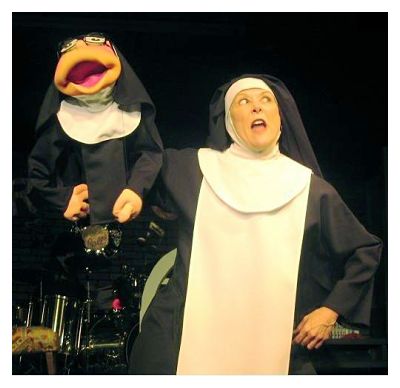 There's a plot twist that provides the Little Sisters of Hoboken with the funds they need, and it involves the discovery that Sister Mary Amnesia is a country singer. Michelle Cheney can sing up a storm and she proves it, but my takeaway impression was her accent, voice and styling were a lot more sophisticated than those of the classic Nashville country ladies.

On opening night Andy Berkovsky spotted me in the middle of the front row and teased me about my positioning. I didn't care. This production of Nunsense is a fine ride and you can enjoy it up close and personal from anywhere in the theatre.

This is a hilarious, highly-entertaining show with a brilliant cast. Highly recommend this show to anyone.

I attended the opening Friday of City Theatre's musical comedy Nunsense and I may go again. It was hilarious! The Little Nuns of Hoboken played expertly by five multi-talented women will treat you to a fun and highly entertaining night (of the musical variety show type) of live theatre. And kudos to the choreographer who kept the ladies dancing, spinning, and tapping the night away. Nunsense is "Habit Forming??" Absolutely. Go see it! 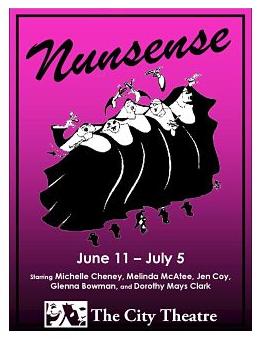