The Missionary Position: Pleasure Journeys for the Intrepid Lady Explorer is a droll and satisfying show just completing its short run at Salvage Vanguard Theatre in east Austin. It's likely to return, and the public should keep it in mind as a performance worthy of  their ticket-buying dollars.

The show is a period piece on lady explorers in late Victorian times. Caroline Reck and Cami Alys of Glass Half Full Theatre portrayed our intrepid lady explorers of the title, reporting to us the findings from their worldwide travels.

The setting  was a Chautauqua-type lecture, arranged in the weight room of a (no doubt) males-only health club complete with punching bags hanging and swinging, ready for use. The audience was assumed to consist only of ladies, who had paid to receive insight from the intrepid travelers. Male audience members winked and played along. The performers skillfully created their comic world with the willing participation of the audience, amply compensated with gut-busting laughs.

It is no spoiler to reveal that the lecture concerned a line of menstrual garments designed with the benefit of the worldwide ethnological journeys of the stalwart ladies. They were trying, with spotty success, to fund their voyages by hawking these liberating devices to their audiences.

Late in the show it occurred to at least one casual observer that no obvious puppets or black-garbed puppeteers appeared in the show, despite their advance billing.  One of the punching bags wore a toy top hat, however, and our explorers demonstrated ladies’ self defense techniques on the punching bag with their bumbershoots. This highly abstracted male figure, representing a hostile attacker, swung crazily about under the jabs of the umbrellas, while the audience willingly chanted the attack points:eyes-bollocks-feet, approximately. The chanting audience completed the anatomy of the puppet as it enacted its part as a sinister character.

I didn’t really “get it” until much later; I whiffed in the event, and many in the audience probably also struck out. Still, the concept that the puppet is constructed and animated in the mind by the voices of the audience is sublime.  Though the attempt might have been only partially successful this time around, I await with anticipation the next go-round and further surprises of puppetry this group may spring on us. In promotional material Connor Hopkins of Trouble Puppet Theatre was given credit for puppetry in this show.

The charms of the ladies were immense, and the performance was multi-layered, authentic, and anything but a simple laugh fest. Period elements were fairly stern: references to the White Man’s Burden, widows' rights to inherit property, and traveling without male escort all received breathless applause from the ladies of 1901. There was no mention of the right to vote, which lay in the future. (In the United States, women’s suffrage was gained with the passage of the Nineteenth Amendment in 1920, but the social movement for women’s voting rights began in the 1850s. (Source: Wikipedia)). Despite this comedic take on late Victorian times, the production avoided the common pitfall of patronizing historical views from the standpoint of 21stcentury moderns. This show was funny but also thoughtful and mature -- certainly a rare combination.

Glass Half Full Theatre is deft and innovative even when performing a period comedy. The company provides full value, playing with (not against) the audience, and also reveals its innovative spirit and high creativity as it does so. This is a company to follow. Their program reports their next show will be a restaging of their Once There Were Six Seasons, to play at Salvage Vanguard Theatre, May 20 through June 7, 2014. 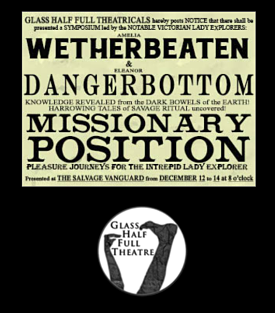