Review: Maid Marian in a Stolen Car by Zach Theatre
by Michael Meigs

The stage is a magic mirror and a magnifying glass.  When he appears in the theatre-in-the-round intimacy of the Zach Theatre's Whisenhut stage, Jaston Williams looks much taller than in real life.  Wisecracking, telling tales and occasionally appearing in drag, he pleases his audience by providing just enough of that trademark Greater Tuna fun as he gives them an account of his 30+ years on the stage.  Behind the cheerful satire and the studied comic rants there stands another, even more appealing character -- Jaston Williams as the madcap uncle who makes eyes roll and faces light up with his unapologetic anecdotes.  He's probably told most of these stories many times before, over drinks or on the street after Sunday service.

He begins with his young days in Lubbock, when his mother and their neighbors were at a loss to understand this curious young man who play-acted film and theatre roles in the back yard, inevitably gesturing with a fist clutching a clump of dirt.  Wearing fly-away eyeglasses frames and a severely practical apron in the persona of the eternal Worried Mother, he flutters about the stage like a creature from faraway Planet Lubbock.

At the age of 21 Williams was part of a ambitious and well-intentioned troupe that performed  a 9 a.m. Hamlet in San Antonio before an audience from two Hispanic high schools that were bitter rivals.  Williams was cast as Osric, the swishy courtier with a feather in his cap, well positioned to witness the clamor, incredulity and engagement of the tough but naive audience members.  He tells the tale vividly in word picture, gesture and exclamation, capturing the consternation both of actors and of audience.

The Whisenhut audience ascends with him into the branches of the noble oak in a San Antonio park where Williams and Joe Sears shared stories of their families and neighbors in rural Texas and Oklahoma, enhanced by a substance 'that now is perfectly legal in Colorado and in Washington state.'  He details the genesis of some of the Tuna roles and tropes, always with a happy grin. 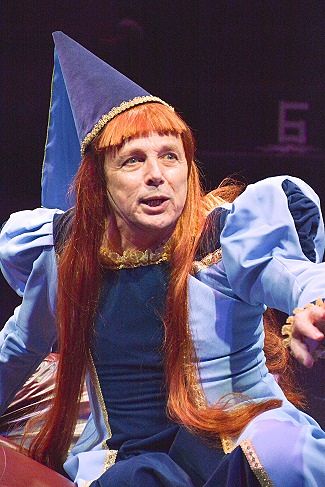 At four points during the evening he presents 'rants' -- stationing himself in one of the aisles of the Whisenhut space, he flips furiously through a script set before him on a music stand, delivering imprecations and comic metaphors with a speed and spittle that contrast with the ease of the rest of the show.  After each, a Zach staffer helps cool him down with a fan or a spray bottle.  His targets are not surprising, but the attacks not ad hominem but rather evocations of absurdity.

After we all cooled down during intermission, Williams was back in Maid Marian garb to talk about middle years of theatre adventure in small groups in the Southwest.  Personalities were big, events were unpredictable, and theatre folks never knew what was coming next.  Williams conveys a sense of the ties and affections of the theatre's wild family of artists, including stories about the usually unseen techs, costumers, dressers and stage hands who make the performances possible.  He opened unexpectedly to tell the audience of personal catastrophe -- many in the audience audibly caught their breaths -- and detailed the affection and solace immediately and generously provided to him by his ad hoc stage family.  Williams ascended principal aisle of the Whisenhut space for a quiet tableau and display that captured that healing process.

Director Sarah Richardson sets an unobtrusive choreography for Williams's wanderings around the stage, and he's always aware of the challenges of the setting in the round. There's a key second-act interlude for costume change, intended to change the rhythm.  This scenette features a nicely subtle interplay between actor and dresser.  The accompanying recorded music is agreeably New Age-ish but the words -- apparently intended to be Shakespeare's Sonnet 116, included in the program -- weren't apparent.

Jaston Williams is most memorably a creator of hometown characters who took them out to a wider world.  His affection for the originals is apparent, for although he makes fun of them, he never mocks them.  One of the enduring images in this performance is that of the moment after Sunday morning service when Williams lost track of his adopted son.  He located the boy on the street corner, hand-in-hand with the solemnly conservative town mayor, showing the man some dance steps.

And the mayor was beginning to get the hang of them.