One of the challenges of Macbeth is that we all know the text. Not by heart but, thanks to the hard work of generations of English teachers, just about anyone who is sitting in the theatre when the lights go down will have the elements of the plot.

That's good, and familiar, and comforting. The downside of that familiarity is that the actors don't fear losing us. They have a text to deliver, and they make sure that they hit all of the words and action. Like slalom skiing. You make all the curves and hit all of the gates, and you make it to the finish line still on your feet.

Texas State's production of Macbeth this past week was vigorous, atmospheric and fun to watch. Preliminary music was eerie and appropriate, and stage movement was excellent.

Director Charles Ney gave us a surprise in the opening scene. Yelling, battling warriors rush onto the stage and have it out with much clashing and dying. When the dead are left and the quick are fled, the witches rise from among the corpses. As they chant, they dispose of the slaughtered, dumping them down a trapdoor at center stage. After the Weird Sisters disappear, one prostrate figure remains, and he is revealed to be the "bloody sergeant" who then unfolds to newly arrived King Duncan the tale of the battle.

Caleb Strauss as Macbeth is a fine, strapping figure, far more manly and kingly than the self-satisfied Duncan (Tyson Rinehart) or the tentative crown prince Malcolm (Travis Hackett). He's a man of action, a Die Hard kind of guy. Neither he nor his Lady have any doubt about what's going to happen when hapless Duncan comes visiting. Yes, they do discuss it -- that's in the text -- and they set about their foul deeds with anticipatory chuckles.

We in the audience see few pauses for thought. And all too often in this production,actors represent emotion by expostulation, as if shouting the end of a speech would convince us that they really meant it. Those two faults undermined the subtext, the themes and the action.

For example, look at Act IV, Scene III. The presumptive sovereign Malcom, readying to march on Scotland, undertakes to accuse himself of the same vices of treachery, violence and vice that Macbeth has shown. Macduff, unaware that his own family has just been slaughtered, seeks to counter Malcolm's self-reprimands and to counsel amendment to him. Malcolm's obdurate persistence in this malevolent exercise finally drives indignant Macduff to call him, "Not fit to live!" and to lament the fate of Scotland. 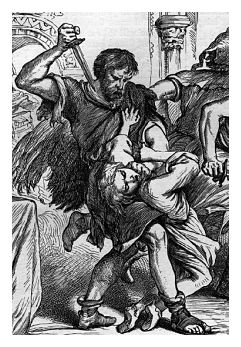 There is a lot going on in this scene. Malcolm is fooling Macduff; we in the audience know that, but actor and director should be using pauses, modulations, and body language to remind us of it. The scene should grow with each succeeding category of self-accusation, and we should see Macduff's growing discomfort.

Malcolm is also testing Macduff, judging his loyalty against his patriotism. Macduff has no idea yet that Macbeth has murdered his family, giving us the vibrant background of those murders, which we've just seen onstage. We know that Macduff's present despair for "poor Scotland!" is about to turn into personal catastrophe. Ross arrives from Scotland, prevaricates, and then delivers the stunning news.

These are delicate and difficult evolutions, and they deal with core problems of the play: integrity, loyalty, and the vulnerability of a people to the vices of the sovereign. Travis Hackett as Malcom and Micah Lyons as Macduff miss most of this emotional and thematic movement.

Some of the actors get it exactly right. Christine Tankersley as Lady Macduff speaking to her son Fleance (Oscar Cabrera) gives a poignant, transparent reading of her concern and of her love for the boy. Cabrera's confident childish banter with her brought delighted chuckles from the audience. Richard Romeo in the tiny role of the old man outside Macbeth's castle speaks and acts to the point. Storm Adams is a jolly clown porter and a physician suitably concerned by Lady Macbeth's sleep walking.  Benito Lara as Seyton, servant to Macbeth, and Alicia Yvonne Nelson, gentlewoman in waiting to Lady Macbeth, are both sharply drawn cameos.

The three witches are full of malevolent life but their diction should have been sharper -- screeching and cackling unfortunately are not morphemes. 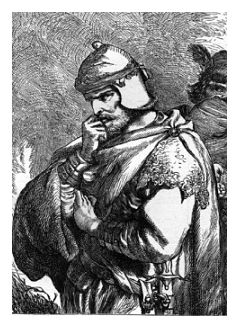 As Macbeth, Caleb Straus gains presence and credibility through the course of the play. The further steep'd he is in blood, the more rational and comprehending he becomes. That is Macbeth's tragedy in the play.

We see Straus' mind at work, his hopes invested in the witches' equivocal predictions. His berating of messengers is dramatic, effective business. His soliloquies late in the play are measured, beaten-down but defiant. His Macbeth reaches grim awareness. Receiving the word of Lady Macbeth's death, he is almost off-hand, lost in reflections.

She should have died hereafter;
There would have been a time for such a word.--
To-morrow, and to-morrow, and to-morrow,
Creeps in this petty pace from day to day,
To the last syllable of recorded time;
And all our yesterdays have lighted fools
The way to dusty death. Out, out, brief candle!
Life's but a walking shadow; a poor player,
That struts and frets his hour upon the stage,
And then is heard no more: it is a tale
Told by an idiot, full of sound and fury,

Jenny Joslin as Lady Macbeth, first bright and breathless, declines to distract pitiable madness.  Michael Holley as Banquo is phlegmatic but convincing, particularly when he appears as the green-tainted ghost in the banquet scene.

Swordplay is dramatic, with lots of flashing clangs. We are thrilled, even though fancy behind-the-back parries and other cool moves probably would have gotten real thanes split from nave to chops.   The conjuring of the parade of kings descended from Banquo was spectacular, as were lighting and the minimalist, mirrored set design.

EXTRA: .pdf copy of the 10-page program for MacBeth

EXTRA: The "Twitter" version of Macbeth, with acknowledgement to Pandora's Skull:

M: Kingship is just not in the cards for an ambitious and superstitious Scotsman. 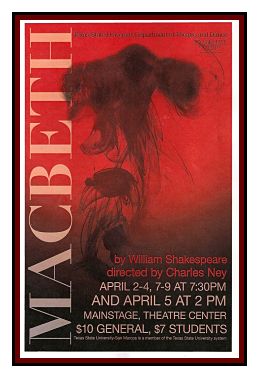