Shakespeare's most frequently performed works have remained vivid and vital for centuries in part because he creates characters caught in life's fundamental, archetypical dilemmas.  Young lovers Romeo and Juliet rebel against constraints of family and society.  Hamlet, the solitary hero, disappointed and deceived, seeks justification for taking action against a sea of troubles.   Lear rages against old age and arrogant indifferent children.  And Macbeth is a good man undone by temptation who's headed straight to hell.

Noble, dutiful and valiant, Macbeth is lured by ambition into the evil sequence of deceit, regicide, murder, slaughter, oppression and war.  In opening scenes he's victorious and devoted, a central figure whom all admire; over the course of these five acts he abandons obedience and scruple, wading ever deeper into mortal sin and bloodletting, alienating our initial sympathies.  This is an enormous distance to travel, both for the actor and for the audience. 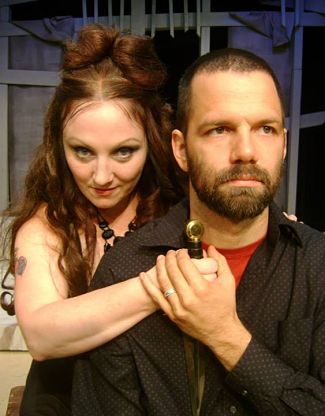 Brian Villalobos establishes City Theatre's Macbeth as fit, athletic and eloquent and haunted by the sensitivities of a modern young 21st century man.  In opening scenes we see him less as a tempted hero than as a hesitant victim of the witches' beguiling prophecies and the cold-hearted insistence of Dawn Erin as Lady Macbeth.  Villalobos uses one particular and distinctive gesture again and again in the opening acts: in confusion and indecision he seizes his head with both hands.

Indecisive, but not inarticulate.  His delivery is well paced with good scansion and no grandiloquence or bombast.  One senses a Macbeth engaged in an ongoing interior dialogue.  Villalobos  played some replies more quietly than the house really allowed -- though the City Theatre with its 85 seats is an intimate space, there's a lot of cloth and space behind the players to swallow up sound.

Villalobos moves Macbeth away from that initial confusion toward greater decision and clarity. In contrast to the play's more familiar traditional arc -- showing the usurper as single-minded but ever more out of control -- his Macbeth seemed to comprehend more fully the consequences of his actions.  He does grasp at the straws of the witches' mendacious assurances, but he's calmer, stronger and increasingly more determined in the final act.  Villalobos is on one knee at center stage when he's given the news of the death of his queen; he pauses, not rising, and delivers the memorable monologue "Tomorrow and tomorrow and tomorrow. . . " quietly and without bitterness.  Some of his final exchanges with MacDuff are wry and offhand, almost stoic.

Wronged rightful heirs Malcolm and Donalbain disappear in Act II immediately after their father the king is murdered, and the central action of the play, counter to Macbeth's traditional transformation, is necessarily Malcolm's campaign to return and his reconquering of his lawful due.  In this sense, after the striving and the furious battles the play text ends almost abruptly, a mere 35 lines after the slaying of Macbeth.

That re-establishing movement seems incomplete in this staging.  Trace Pope as Malcolm is not the dominating personality that Villalobos' Macbeth becomes.  The actor dropped no lines, but his phrasing was scarcely modulated, and the audience had to rely principally on the words of the text rather than on subtext, physical movement or emotional shading. And one pet peeve: only by explicit design should a principal character stand with both hands in his pockets, a negligent attitude that suggests an uneasy actor. 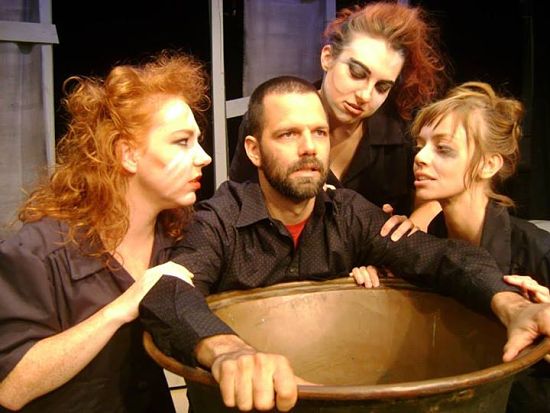 Several key cast members make Shakespeare's language full, charged and captivating, speaking it trippingly on the tongue.  Dawn Erin as Lady Macbeth lashes, regrets and laments in thoroughly convincing style; Heath Allyn as Banquo and Old Siward has both presence and abundant audibility; Dave Westenbarger as Ross is harbinger and messenger to the unhappily fated MacDuff family.  The murder of the MacDuff family offered deft, well-spoken cameos by Maria Latiolais as Lady MacDuff and by Hallie Strange as her child. 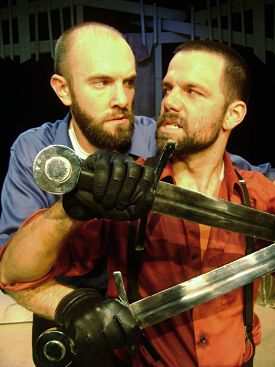 In particular, Dave Yakubik as MacDuff demonstrates emotional range, physicality and mastery of the language.  In the final battle to the death, in the gripping choreography of Nick Lawson with its dramatic finish, he and Villalobos have the audience flinching, perched on the edge of the seats.

There's a curious anonymity of concept to the staging.  Andy Berkovsky's abstract set offers an impressive jagged construction of dark, pointed vectors that could serve any number of settings.  The cast appears for the most part in unremarkable contemporary dress, perhaps appropriate for a teacher's lounge at an English boarding school -- honorable and admirable exceptions being accorded to the Macbeths' vivid garb once they're on the throne.

My theatre-going partner was confused by similar white lab coats when Nick Kier appeared in Act IV in England as 'a doctor' to explain the healing power of the English king's touch and only a hundred lines later Brad Hawkins in similar costuming was 'a doctor of physic' in Scotland observing the sleepwalking Lady Macbeth.

The lithe and tasty witches are done up Goth as if they might be the debauched townies out on the heath, and Hecate's use of a black shawl to mask prophecies is a clever touch.  Director Kevin Gates adds interesting program notes on the subject of witchcraft in Elizabethan times.

Sound design seems to aim at a similar spooky contemporary touch.  As the lights come up at intermission we hear Jim Morrison and the Doors singing Strange Days.

Click to view the program of Macbeth at the City Theatre 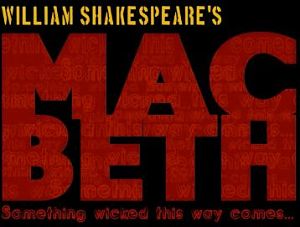