With the imagining of her piece Lady M Melissa Smith-Rodriguez explores the darkness of pre-history, of feudal Scots customs and of the perceived enigma of character of the leading woman in Shakespeare's Macbeth. This play is not an exculpation of Macbeth's unnamed lady but rather the creation of a fictional history explaining the woman's cold, fierce and ambitious nature.

As a mantra and foreshadowing the playwright evokes the dark night of Act II, Scene 2 with Lady Macbeth's feverish comment,
" Had he not resembled /My father as he slept, I had done’t."

Ours is an age of prequels -- to use that nasty twentieth century neologism made popular by George Lucas and Francis Ford Coppola -- and most of them have motivations that are crassly commercial. In contast,  Smith-Rodriguez's Lady M is a serious and respectful piece, providing a credible back story. 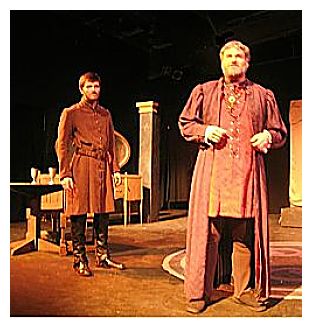 Recorded Scottish history was no great help, as the playwright notes in the program. Gruoch, who later became queen to Macbeth, had been married to a nobleman who died along with fifty of his followers when a hall caught fire. The cause is unknown. Macbeth married Gruoch subsequently and they ruled in peace for many years.

The playwright focuses on the young Gruoch, mother of an infant daughter, and supposes that Gruoch's father Boite was scheming to clear his own way to assume the crown of Scotland. Their kinsman the young Macbeth thirsts for vengeance for the murder of close family members by unknown hands. The arrogant and duplicitous Boite informs Macbeth that Gruoch's husband was responsible and persuades Macbeth to set the fire that kills the man and his followers.

As soon as he communicates the news of the murder, Boite tells his daughter that she must marry Macbeth. 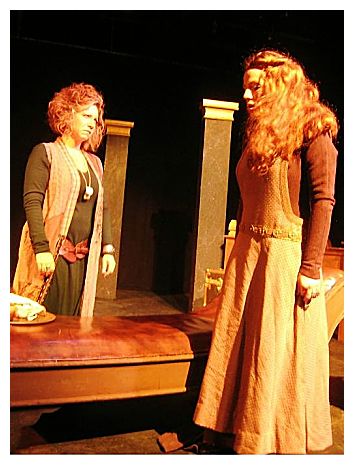 This vigorous intrigue puts Gruoch in a dilemma. She owes obedience to her father but she is confused and grief-stricken. Gruoch temporizes, throwing Boite into a rage. With the assistance of her serving woman Ceana, the young woman consults a village woman known for clairvoyance and gets some very bad news. Suffering and blood are in her future.

Women are the visible victims in this piece. Boite takes murderous revenge when he learns through a guileless Macbeth that the women are planning to flee the castle.

Boite is a monster, but Smith-Rodriguez is relatively gentle with the other male characters of the piece. She paints Gruoch's first husband Gilla (Wesley Riddle) as understanding and kind, perhaps inexplicably so in the opinion of his young wife.

Wesley Scott Crump as Macbeth comes across as sincere but clueless, ready to be led by the nose. He fails to question Boite's assertions, and after his mass murder by arson he expresses no doubt or remorse. Neither Macbeth nor anyone else makes much of the cowardly crime, and Macbeth's responsibility is never revealed. Curiously, Macbeth approaches Gruoch with the respect and delicacy of a teenager come a-courting, quietly willing to wait until she's ready to consider the match.

The text is written in acceptable blank verse, with an occasional apt metaphor but no attempt to rival Shakespeare in eloquence or depth of concept. Some linguistic anachronisms creep in -- "to realize," for example, which according to the Oxford English Dictionary acquired its current popular meaning late in the 18th century and was "in early use chiefly American, and frequently condemned as such by English writers about the middle of the 19th century." I'm doubtful about the phrase "power-hungry barons" but cannot muster any etymological evidence against it other than the fact that my old OED offers as relevant compound examples only "power-seeking" and "power-usurping."

These are just fun quibbles, though, because with her attention to language, her energetic plotting and her vivid portrayal of Gruoch's anguish, Smith-Rodriguez provides a credible story situated in a world remarkably like that portrayed on Shakespeare's stage. The cast and director Matthew Braylon Hayes, all associated with Texas State University in San Marcos, serve this vision well.

Rob Novak as Boite has a doughty presence and an adamantine deluded will to power. The playwright provides the character with an appropriate comeuppance as Gruoch escapes from him by marrying Macbeth. 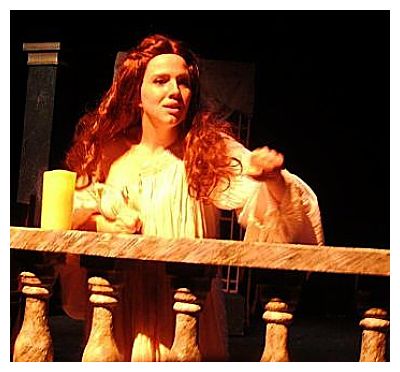 Brittany Flurry as the serving woman and Melissa King-Knowles as the seer are foils to the future Lady Macbeth, who becomes terribly isolated when they are removed.

But the roses go to Katie Townsend, playing Gruoch, the future Lady M. She must move from relative innocence and subservience through pain and bewilderment to resolve -- in a relatively short period of stage time. Townsend's virtue is that she does not overplay any of this. For her final scene she kneels at a railing immediately before the audience. She looks out in a vision or delirium and calls on those who have perished. We understand her loss and watch as her soul ices over. The lights go down; in the blackness Gruoch picks up her flickering candle and blows it out.

A final point: having brought their public thus far, the company owed them the release of applause and a curtain call. The decision to bring up the house lights with the stage bare and to banish the actors from accepting acclaim was considered, perhaps, but even so, unkind.

Link to PlayShakespeare.com "feature" taken from this review, January 29