Review: Into The Woods by City Theatre Company
by Michael Meigs

This energetic and clever staging of Stephen Sondheim's Into The Woods confirms for me once again my belief that Austin's City Theatre offers the best entertainment value for money available in the area today.

Ours is an age of disclaimers, so let me be explicit, with a  "claimer":  I have been a fan of the City Theatre for more than two years.  Andy Berkovsky and the artists working with him at the tidy little 85-seat theatre behind the Shell station at Airport Road and 38 1/2 street offer a season that is unmatched for its scope, variety and prices.  The City Theatre offers a nine-play season ticket for two for only $150.  You couldn't go to the movies for that. 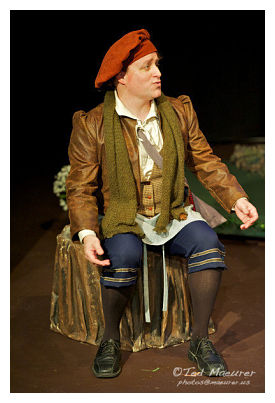 I had acquired the CD of the 1987 original Broadway cast recording of Into The Woods, but this past weekend at the City Theatre  I realized that only through performance can one appreciate the richness and complexity of the piece.  The City's space gives Into The Woods the cozy intimacy appropriate for a work written as a chamber musical.  Come early, so as to secure your seat in the closer rows, or pay a couple of dollars extra to reserve at second-row, center.  You will be delighted by the proximity and vivid action.

The 18-member cast features both faces well known in regional musical theatre and newcomers.  In Act I they weave for us a tapestry drawn from the familiar tales of Cinderella, Jack and the Beanstalk, Rapunzel and Little Red Ridinghood.  Librettist James Lapine uses the additional characters of a childless baker and his wife, figures drawn directly from the tradition of German folktales or Märchen, to bring all those stories together in the magic space of "the woods," where each is bent on an individual quest.  They carom off one another in unexpected ways but by the end of Act I they've all achieved their Happily Ever Afters.

In Act II Sondheim and Lapine turn that tapestry over.  Life goes on, to the characters' consternation.   They face discoveries, unexpected consequences, delights, ennui, losses and disappointments. Fairy tale outcomes are undone, dissolved or turned rich and strange. 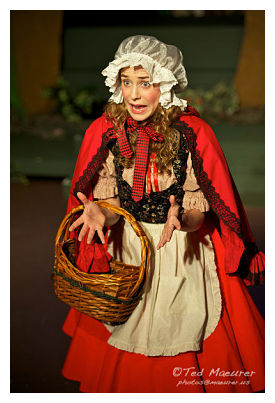 Both the album notes for the recording and the current Wikipedia article cite as an influence Bruno Bettleheim's 1976 classic The Uses of Enchantment, an extended reflection on the uses and symbolism of folktales.  There may be something in that idea.  My own notion is that Lapine may well have consulted Ralph Mannheim's haunting 1983 translation of The Complete Tales of The Brothers Grimm (Anchor, ISBN-0385189508, still available in paperback for a bargain price of $13.60).

We are used to the Disney versions of these fairytales or to sugar-coated versions done for children, but the Mannheim book offers the stories as collected from peasant hearthsides by the studious brothers -- complete with murder, mystery, violence and magic surpassing anything that Disney would ever do.  I recall reading tale after tale, each stranger than the previous, during many late evenings. 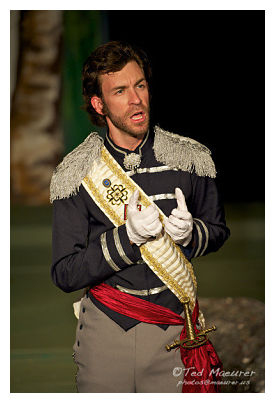 Into The Woods is not a musical play for children, although alert young teenagers could be enchanted by it.  The eight-year-old next to me in the rear of the theatre was baffled.  Sondheim, Lapine, and the City Theatre cast and crew are speaking to adults and young persons about the mysteries and uncertainties of life. The music is lively, with much of it constructed as 16- and 32-bar song forms.

The story is bright and often comic.  Even though the wolf is dispatched triumphantly halfway through Act I, dangers and wickedness remain alive, both within and without.  Violence occurs; characters die and those remaining are bereft and bewildered.

In Act I the two princes sing of the "agony!" of the quest for love -- and then reprise that lament as they ramble off from their wives at the palace seeking access, respectively, to a sleeping beauty in a glass casket and to a beauty hidden in a castle surrounded by thorns.  The mysteries and enchantment of the woods even intrude between the baker and his wife.

The resolution is deeply moving -- an ensemble that gathers in an anthem of hope offered by the disappeared: "You Are Not Alone."

R. Michael Clinkscales as the Baker and Michelle Cheney in the central roles are a fine match.  Their quest in the woods initially brings them closer, with each showing unexpected courage.  Clinkscales is an appealing comic presence and Cheney delivers, yet again in this work, a strong, melodic and perceptive characterization. 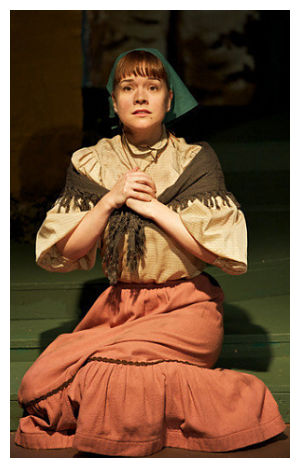 Other favorites are Sarah Marie Curry as the earnestly innocent Cinderella with the pure voice, Matthew Burnett of the smooth manner and self-mocking deportment as both Wolf and Prince, and the bounding and intense Liz Newchurch as Lil Red.

Special credit goes to David Blackburn, music director and production pianist, whose direction, dexterity and tireless fingers kept Into The Woods springing forward from one surprise to another.

View program for Into The Woods by City Theatre Austin