The black box on the fourth floor has a claustrophobic feel.  The central space is stark and looks more like a basement than an attic -- a couple of benches, neutral gray walls, a narrow high window,  a couple of empty beer bottles left on the sill.  As you gather and settle into the ranks of seats around that central space, the theatre serenades you with recordings of French music -- Jacques Brel, an anachronism, singing his lament about the 1914 assassination of pacifist Jean Jaurès, then a better calibrated sucession of ballads by Edith Piaf.

The house lights are up when a couple of men in overcoats and fedoras bring in a man from your right and summarily deposit him on a bench.  He sits, bewildered.  A few moments pass, and the plainclothesmen bring another arrested man in from your left.  Eventually the house lights go down, the collect continues, and the spectators face a group of about a dozen males, withdrawn, trapped and unwilling to look at one another.

This is Vichy, some 400 kilometers south of Paris, 1942.  It's the administrative capital of the "free" zone administered during early years of World War II by a government headed by Marshal Pétain.  Expressionless French police do not respond to the uneasy questions of the detainees.  We gradually learn that they've been picked up off the streets by cruising patrols.  None appears to have broken the law, except perhaps for the sullen gypsy presumed to be a thief by vocation. 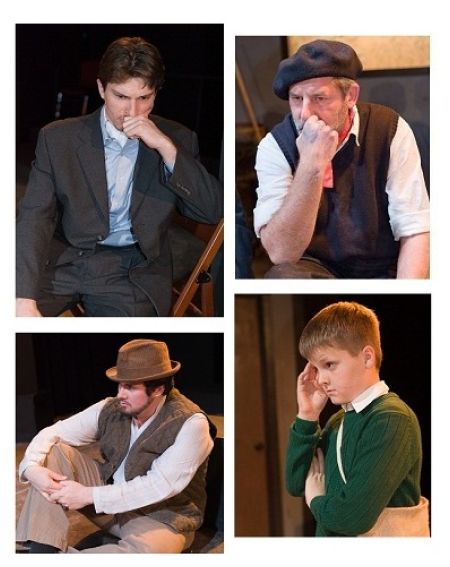 Some of the detained are nervous and voluble.  Some are self-confident, including a well-dressed man, apparently a businessman.  Others remain grimly silent.  Miller has populated this microcosm with an electrician, a silent white-bearded old Jew, a schoolboy, an actor, a military doctor, and more.  This tense one-act play establishes these characters, obliges them to wait to be called for interrogaton, leaves them fretting at the silence of the French policemen who guard them and the two Germans beyond the blank door -- an army major evidently handicapped by a war wound and a tight-lipped man dressed, ominously, in a white lab coat.

That blank door will eventually open for them, one by one, and few will emerge.  Those awaiting their turns begin to understand that this routine document check is in fact a calm, bureaucratic identification of Jews and gypsies to be shipped away on a train of cattle cars, run by a Polish engineer and destined for eastern Europe.  Hopeful assertions of labor camps are countered by rumors of concentration camps and gas ovens.

This is a grim piece, written in 1964, late in Arthur Miller's career.  Incident at Vichy didn't last long or play often when it was staged at a Washington Square Theatre in New York -- only 32 performances over a run of five months.  Miller had written a schematic but dense parable about events that didn't particularly interest most Americans and that the French were actively trying to bury.  Not until 1995 did a French president with his own murky record in Vichy and in the résistance, François Mitterand, make a formal apology for the French government's complicity in the round-up and deportation of Jewish citizens of France.

The sequestration of a dozen miscellaneous citizens inevitably reminded me of my own recent experience as a juror on a case at a Travis County criminal court -- particularly the process of the self-identification, the gradual exchange of information, the tentative establishment of a sense of solidarity.  Except that members of this group are not deliberating but instead are being invisibly judged beyond that blank door.  The terror of the unknown accelerates the solidarity among those remaining.  Almost all are guilty of having Jewish parentage; only two will receive the coveted paper that authorizes them to exit this anonymous hell. 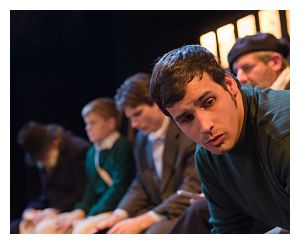 My admiration to director Cathy Jones first of all for recruiting a cast of 18 men for this challenging piece.  She secured experienced first-rate actors for the key roles.  Larry Oliver as the white-coated Professor Hoffman is sternly expressionless, a convincing mengele.  Both he and Kirk Miller as the French police captain create those distasteful characters with efficiency and without exaggeration.  David McCullars and Joe G. Moore are notable among the detainees.

As the supernumeraries drain away, however, the audience finds itself facing three men obliged to incarnate Miller's trialectic.  Each does so with conviction and depth. 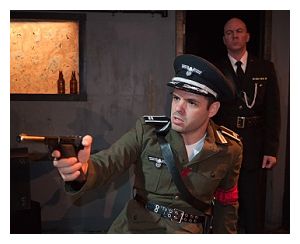 Steve Williams is the nameless German major, perhaps a war hero, profoundly unhappy with the duty assigned to him.  He struggles with the assignment and shows no belief in the racist theories implicit in it.  The major departs the scene and when he returns, unsteady,he buckles to Hoffman's threat of reporting his reluctance to senior authority.  There is a bond between the major and detainee Dr. Leduc, similar individuals who fought on opposite sides of the lines in Amiens. The major elects to ignore that affinity and instead to accept his duty as prescribed to him. 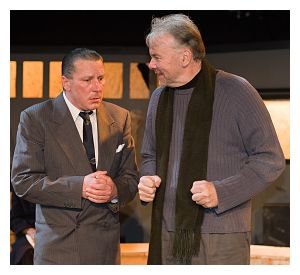 Bob Beare as Leduc has the focus, stature, and self-effacing thoughtfulness of the great English actor James Mason, whom he somewhat resembles.  Leduc is the first to understand the intentions of the French and German authorities.  Miller provides a more extensive background for him, establishing him as a decent man and a humanitarian, with much to lose.  In this hell of immobility, Leduc is the only one of the detainees actively seeking to escape.  As the numbers diminish to only two, he elects to confide fully in the only other remaining detainee, Von Berg, an Austrian aristocrat picked up on suspicion of carrying false papers.

Jesse Griffith has the advantage of portraying a decent man.  His performance as Von Berg is exquisitely controlled, the portrait of a man of great sensitivity and restraint.  Von Berg departed his native Austria, appalled with the vulgarity and murderous intentions of the occupying German forces.  He confesses to Leduc, as the two are the last ones trapped in the gray hell,  that he came close to suicide in his despair over his failure to shield his Jewish employees.

The reluctant accessory to the murder machine, the fully human and aware victim, the despairing exponent of German-speaking decency and moral feeling. . . Miller's accomplishment is to make them both characters of dimension and at the same time prototypes of millions more who were involved in the still incomprehensible atrocities carried out by and on European civilization.

Canny dramatist that he is, Miller raises tension levels inexorably throughout the piece and in the concluding scene delivers an unexpected outcome -- a moment of flickering victory, an "incident" certain to be glossed over in the official record and almost certain to be reversed by efficient police action. 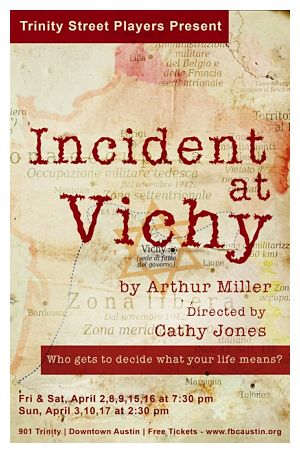