Mr. and Mrs. George Tesman return to Norway after six months of honeymoon in Europe.  In their absence family friend Judge Brack has arranged the purchase of a city mansion at great expense and furnished it lavishly.  Ibsen's Hedda Gabler opens on the morning after their arrival at the new residence and a new domestic life.

Allan S. Ross designed this set with meticulous detail.  The audience has the time to study the heavy furniture, carpets, framed engravings, views into three additional rooms and a barely glimpsed horizon through the windows.  As one listens to a querelous duet between piano and cello, the roseate illumination brings out the reds and purples.  At stage right, rear, in his own pool of light, bearded and wearing his military decorations, the late General Gabler stares serenely out from his portrait.

This is a house, not a home.  Everything is in its place, according to good taste, discreet expenditure and bourgeois standards.  In the action that Ibsen unfolds for us, Hedda Gabler as the new mistress of the house is guarded in her reactions to everyone in these new circumstances.  Having passed the age of coquettery, she married George Tesman for lack of anything better to do; now, having involuntarily made her nest with a passing comment about this particular manor, she finds herself obliged to live in it.

Asia Ciaravino is haunting in the title role.  That quiet, watchful oval face is almost unblinking, She has the unconscious beauty of a woman who little cares whether others look at her or not.

In one sense, in Hedda Gabler Ibsen wrote a great thumping melodrama and resolved all the conflicts with a couple of pistol shots. One occurs far from the house and is described for us as the Greeks used to do at the conclusions of their tragedies.  The second takes place in the final moments just behind a curtain in one of those alcoves as Hedda takes her own life.  That's hardly giving anything away -- although the program states that Hedda Gabler was first presented in Dublin in 2008, that's referring to this adaptation by Brian Friel for the Gate Theatre.  Hedda has been putting the pistol to her head since 1891, and many spectators echo the scandalized reaction of Judge Brack: "But people just don't do things like that!" 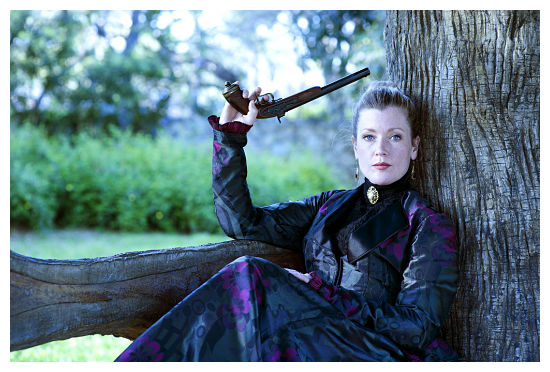 Friel's version is faithful to the action of the original.  He takes some pleasure in adding to Brack's lines some pedantic, self-congratulating use of slang expressions that the judge identifies -- not always correctly -- as American. Allan S. Ross plays Brack with relish and requisite pomposity, while retaining the edge of a man used to dealing with miscreants. Friel has Brack momentarily trying to scold the lifeless Hedda Gabler before delivering his classic tag line; that doesn't appear in the original but it perfectly suits the character of the man.

Translators comment that Ibsen gives George Tessman, his aunt Julia and the family servant Berthe a distinctive style of speech, characteristic of the middle class and perhaps of the nursery, while Hedda has crisp aristocratic speech patterns.  Friel doesn't seek unduly to reproduce those effects, for the same message can be achieved with intonation, social manners and body language. 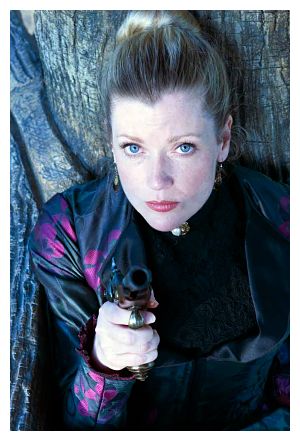 The melodrama is the arrival in town and in the Tesmans' lives of Eilert Lövberg, an intellectual as brilliant as George Tesman is pedantic.  Lövberg disappeared into dissipation years before, after Hedda refused his attentions and threatened him with a pistol.  Now as Hedda arrives to the dull duties of bourgeois married life, Lövberg reappears, having published a book that may undermine Tesman's prospects for a professorship.  He is preceded and followed by the adoring Thea, a former classmate of Hedda's who gave him a job as a family tutor and served as his secretary and amanuensis.

Finding her own life without meaning, Hedda follows her impulses, tormenting Lövberg and daring him to join the wicked little bachelor's drinking party organized by the judge.  She destroys him three times over -- first, by pushing him off the temperance wagon, then by confiscating and destroying the manuscript of his new book, and third, by handing the apparently suicidal writer one of General Gabler's pistols.

Hedda Gabler has been interpreted as a melodrama of class conflict and as a portrait of despairing boredom and selfishness.  With their staging of Friel's adaptation, the Ciaravinos and the Classic Theatre give it an added hot twist.  This Hedda Gabler is not, strictly speaking, feminist in ideology but the director and players create for us a Hedda with the cool assurance, distance and self-control assumed to be typical of masculinity.  Her spouse George Tesman, played sympathetically by Andrew Thornton, is vulnerable, well meaning and openly emotional, a man with the sensibilities of his maiden aunts.  Hovering over that opposition is Tesman's Aunt Julia, looking for signs that Hedda might be pregnant and about to assume a proper wifely role.

The real moment of crisis in this staging comes in Act V, when George realizes that Hedda is, indeed, with child.  It's a gripping scene, with Hedda seated motionless, trying to remain stony-faced, as George erupts in a confusion of emotions, never perceiving the devastation his joy and attentions are causing to Hedda. Ciaravino radiates distress and her eyes brim with tears.  Much later the same evening I went to my library, trying to see if Friel had added dialogue to the this short scene, for it seemed longer than the page or so that it occupies in the books.  I think that what happened, instead, was the miracle of stage time -- Ciaravino and Thornton were so vivid in their presentations that we were drawn far into the emotional catastrophe.

Next to those moments, the thick series of other catastrophes in the act is as nothing.  There are plenty of them, as in any rousing melodrama -- Hedda's burning of the manuscript, her confession to George, the judge's report of Lövberg's scandalous accidental death in a brothel, the judge's interest -- somewhat more than paternal -- in privately offering to cover up Hedda's loan of the pistol,  and Tesman's sudden devotion to helping Thea reconstruct the vanished manuscript of his former rival.

The Classic Theatre delivers an elegant, thoughtful and suspenseful staging of yet another classic.  Eric Geyer as Lövberg is softer and more teddy bearish than I imagined the character, while Gypsy Pantoja is  nervous but fiercely determined as his supporter, another subtle play on expected gender roles.  Terry Peña Ross as Aunt Julia and Susan Brogdon as the motherly maid Berthe round out the cast.

Review by Thomas Jenkins for the San Antonio Current, May 18

Review by Jasmina Wellinghoff for the San Antonio Express News, May 20

Click to view the program for Hedda Gabler by the Classic Theatre, San Antonio 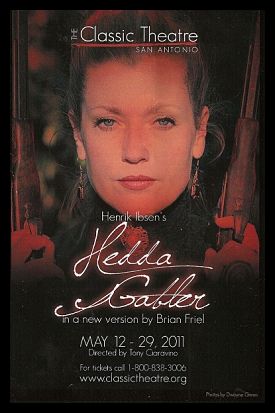