Review: Harvey by The Georgetown Palace Theatre
by Michael Meigs

If it weren't for Jimmy Stewart, Mary Chase's gentle comedy Harveywould probably have been forgotten long ago. It's a pretty broad farce about a hysterically pretentious small town woman desperate to avoid the social opprobrium of her unmarried brother's mental delusions.

The local mental clinic Chumley's Rest is one locus of the fun, where blinkered psychiatrists and a muscle-guy attendant think Veta Louise is the nut-case.  Brother Elwood P. Dowd serenely accepts their diagnoses while coming cutely close several times to introducing them to his friend Harvey, the invisible rabbit who's six feet tall. 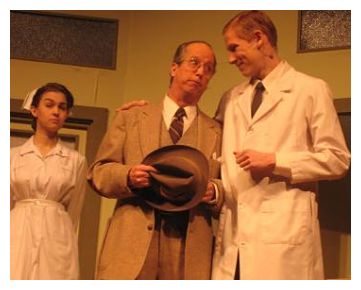 Once all that is straightened out, in the second act Dowd shows with unfailing courtesy that his world-view isn't so bad, the docs offer him and Veta Louise the cure-all of a mysterious injection to return him to reality, and we get some whimsical evidence that maybe Harvey really does exist, after all.  Veta faces a 'perils of Pauline' dilemma about whether to embrace reality or the six-foot rabbit that's become increasingly real for her, as well. 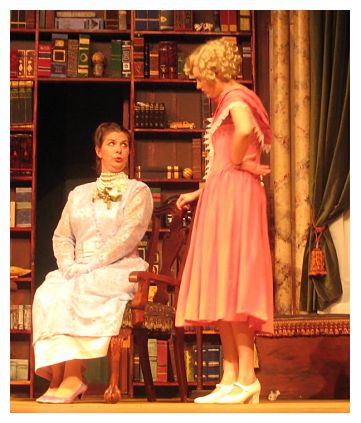 Chase's play opened in New York in war-weary late 1944 and was an instant hit, winning the 1945 Pulitzer Prize for drama.  Frank Fay was the lead actor, but Jimmy Stewart replaced him and played Elwood P. Dowd onstage for three years.  And of course, Stewart was Dowd in the 1950 film, earning an Academy Award nomination for best actor.  That movie and Stewart's droll charm have kept the play alive, making it a staple of community theatres ever since.

The Palace gives this old stuff a vigorous production, including its signature attention to sets and detail.  You'll see a fairly sterile set of doctor's offices when you settle into your seat, but in the pause after the lights go down the stage transforms, earning some impressed gasps and a scattering of applause from the audience.  Credit goes to Set Designer/Build Leader Michael Davis. 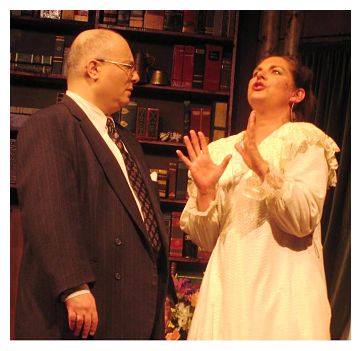 Director Ron Watson has Virginia Keeley play Veta Louise at full throttle throughout, a sort of wild woman on the sea of her own emotions.  Taking advantage of Elwood's absence, she and daughter Myrtle Mae (the svelt, chagrined Abbey Benold) are hosting the ladies of the town for a tea and musicale offstage.  Their back-and-forth chatter provides the exposition before Elwood wanders back home and turns all into social catastrophe.

Michael Rhea comfortably nudges Jimmy Stewart out of our minds with his interpretation of Elwood P. Dowd.  Rhea is of modest stature, dressed in an ample three-piece suit.  He has the gentle manner and shape of a suburban Buddha.  One has the impression that there's a pleasant hum inside his head, one that he would be happy to share if only these people would allow him to do so.

Dowd is disarmingly literalist and direct, happy to encounter anyone.  While his frantic sister sees the world as challenge and contest, Dowd is the embodiment of childlike trust and enjoyment.  The play's theme comes through strongly when he reassures the frustrated and much-put-upon Nurse Kelly:  “Years ago my mother used to say to me,  ‘In this world, Elwood, you must be oh so smart or oh so pleasant.’  Well, for years I was smart. I recommend pleasant.  You may quote me."

Jeff Shaevel as senior psychiatrist William Chumley, proprietor of the nut house, has a vigor and credibility as the shrink who is comically converted to fascination and enthusiasm for the invisible "pookah."   The staff members at Chumley's Rest serve the plot mechanics but don't emerge as vivid individuals.

The Palace audience enjoyed the comedy and gave the cast rousing applause at the curtain call. 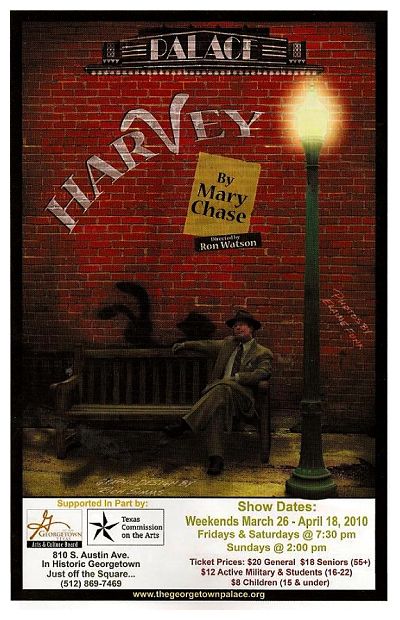