Graham Schmidt's adaptation and staging of Anton Chekhov's very short story Gusev is a dark and haunting hour of theatre in which concept comes close to overwhelming content.

Schmidt and talented collaborators take the ten-page story written by Chekhov in 1890 on his voyage back from Sakhalin Island in Russia's far east and endow it with rich layers of detail, remaining generally faithful to the text and sequence of the original. That overlay distracts and eventually impedes the audience's comprehension of the original, a hallucinogenic point-of-view-shifting meditation on death lightly disguised as a short story (available on-line in the Constance Garnett translation).

Gusev is a peasant soldier discharged from his service as an orderly to an officer in the Russian forces in the far east and packed onto a troop transport back to Russia. He and several others are consumptives, victims of tuberculosis, dispatched for the convenience of military physicians who don't want to care for them and would prefer to shuffle them out of the mortality statistics. The meditation takes place entirely on board ship, and the incident, delirium and yearning within that closed space are instantly identifiable as symbolic of our own human lives, condemned to unknowing and desire in the blank expanse of space and time.

Ia Ensterä's set conveys that metaphor with her usual economy and imagination. Instead of using the big black box and familiar towering bleachers of the Salvage Vanguard, she places the audience right in the bowels of the ship. The roughly square space is defined by distressed  planks attached to metal ribbing, with a broad space at the depth for evocative projections by Julia M. Smith that draw heavily on traditions of shadow puppetry. 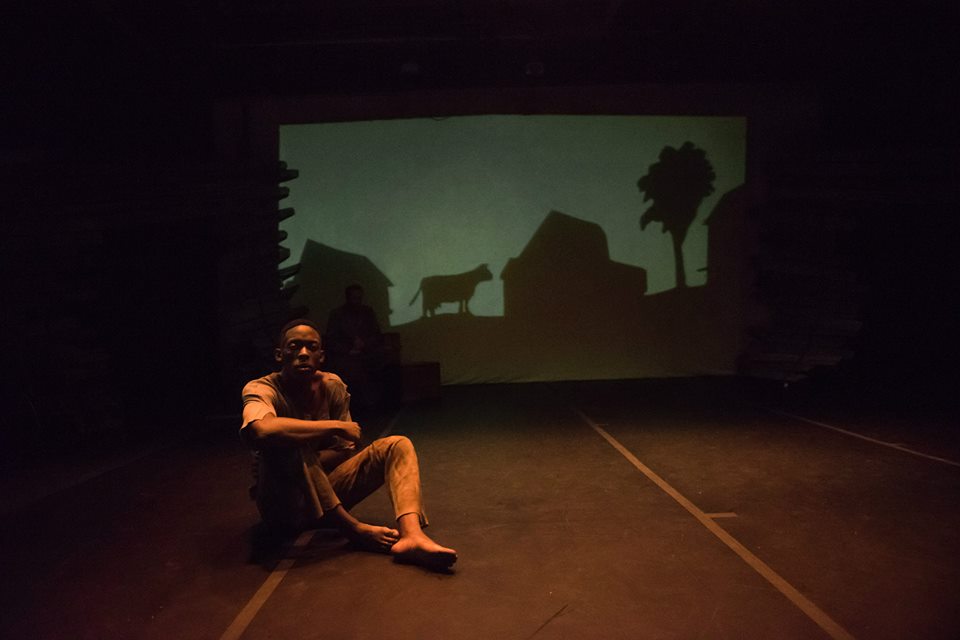 Contrary to what the performance photos might suggest, this powerfully symbolic enclosure of the audience comes at a price. Seating consists of chairs placed in two ranks along the remaining three sides of the space.  Those facing the projections -- that is, those in the conventional spectator positions -- are advantaged, while those along either side wall of the space are going to find much upstage action obstructed or invisible because of poor sight lines. It'll be worse if you're in the second row, for the risers don't lift you sufficiently for a clear view of action that takes place on the floor (and there's a lot of it). It's like the ship described by Chekhov -- there's first class and then there's third class. 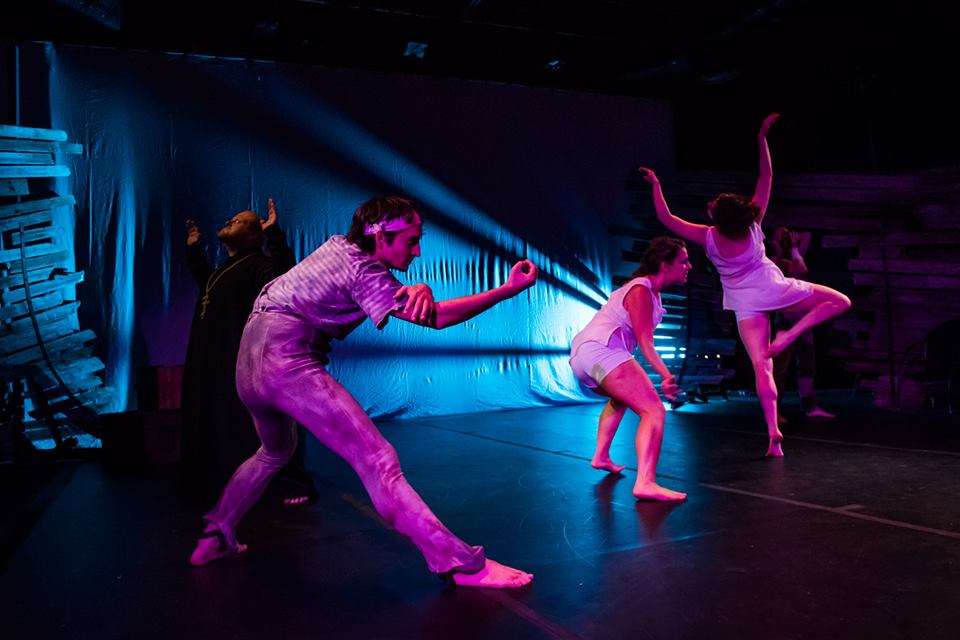 Choreographer Erica Gionfriddo and sound designer Robert Fisher add ballet to much of the production.  At intervals Gusev and other men on this mostly one-way voyage to nowhere interact, fight and strive in intense and closely designed movement. Gusev's monologues, interchanges, and memories are periodically interrupted by Gionfriddo's pas de trois in which the titular character interacts with two graceful young women in white. These twin Nereids or Sirens or sea nymphs are inventions of the director and choreographer, suggesting Gusev's confused state of mind and  also padding out the performance to an acceptable length. That's not a complaint, by the way: The dances and stylized movement are lovely exercises  -- acrobatic, gymnastic and often surprising. Zac Crofford's appearance as a hulking masked figure representing Death is apposite. 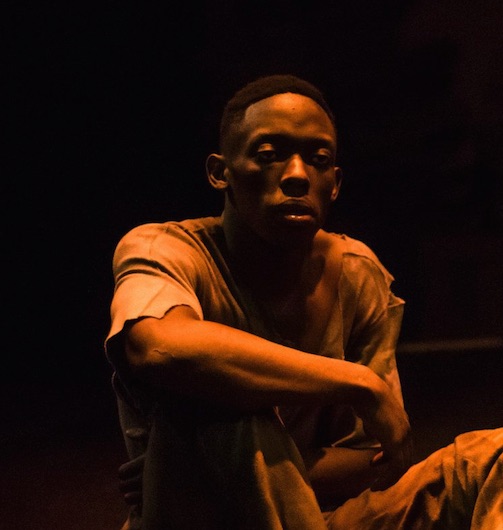 Keith Machekanyanga as Gusev is a gaunt, intense presence, as he must be, for he carries the greatest part of the narration. Much of Chekhov's text is voiced by a third-person narrator, and Schmidt chooses often to retain that, having Gusev say things such as "Gusev thought that. . . ." It's a convention easily accepted, particularly when delivered in the lead's beautifully articulated and projected speech. 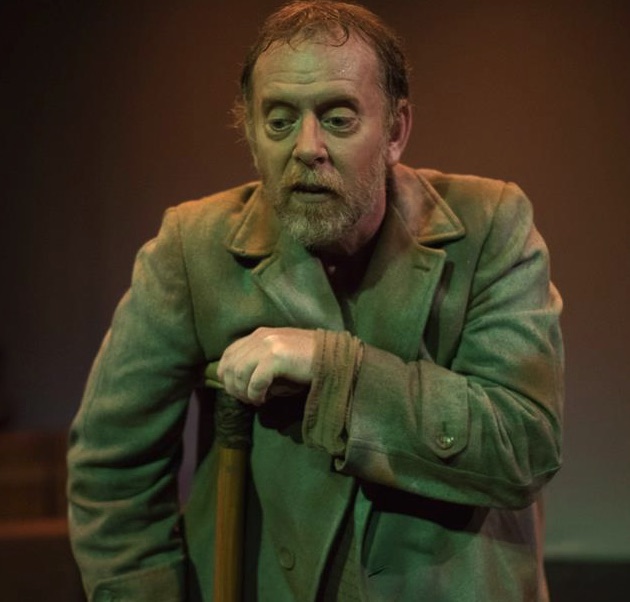 Stephen Price inhabits the juicy role of the loud-mouth cynic Pavel Ivanych with similar vocal ability. This character is largely immobilized by his illness at deep stage right (and therefore invisible to many of the audience members along that side of the stage). Price comes across as the older, wiser, harsher soldier condemned by his illness.

Brock England is the sympathetic soldier who advises Gusev he's unlkely to survive and reassures him that at least his death will be properly recorded. That passage is in the original. Schmidt inserts a telling scene earlier in the hour, in which England recounts to other card players the death of his brother when the surface of a frozen lake gave way. This may be taken from elsewhere in Chekhov or Schmidt may have invented it; in any case, England's tale establishes the theme and preoccupation of this production, encapsulated in the soldier's dismissal of others' feeble attempts to console him: "What does it matter? He's dead, that's all!" 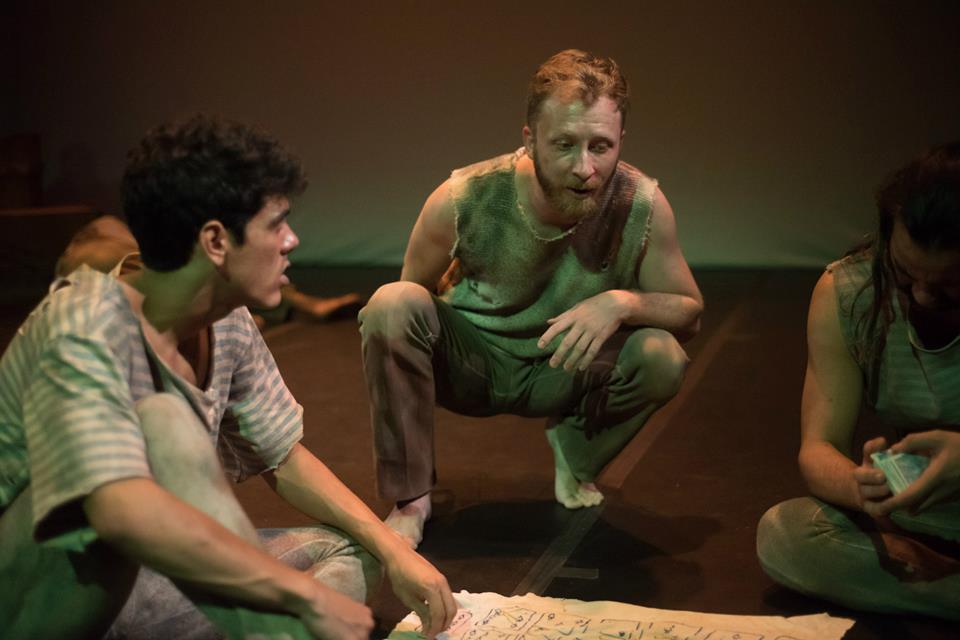 Natalie George's lighting reinforces the eerie netherworld feeling of the piece.  Pam Friday's costumes for the actors intensify the feeling and establish the time period. The dancers' white outfits are a puzzle.

The piece moves forward with Chekhov's remarkable prose, assisted by these various conceptual boosts, toward the inevitability of death. Pavel Ivanych's death is foretold and inevitable. The plot, action and music rise in the concluding scenes, designed to push us all toward a climax as Gusev himself perishes and is committed to the deep. The balletic action with winding sheet and shroud is dramatic, and remaining soldiers carry the shrouded Gusev off stage. Chekhov's final pages are chanted, at times in unison, as the final ballet takes places, including the reappeared Gusev.

But in that din Chekhov's words go missing.

In the short story there are two abrupt and completely unexpected transitions on the final page, as translated by Garnett. At one moment Chekhov is deep in Gusev's mind, describing his hallucination of seeking warmth in an oven, and then suddenly the author is describing the the burial at sea of Gusev, looking into the depths where sharks and pilot fish investigate and tear open the sinking shroud. At that pont Chekhov shifts from past narrative tense to the present tense, concluding with a vividly evocative description of the skies. His use of the present tense at the conclusion virtually yanks us on board with him as he, the returning 30-year-old doctor, is recounting these events to us.

Those changes are surprising but not excessively obvious, and they may represent arbitrary choices of the translator. Schmidt may have rendered the ending differently. But we in the audience cannot know, because Fisher's loud music, the chants and the emphatic distractions of the movement make it extremely difficult to follow the narrative, let alone any subtleties of tense or translation. In case you want to know how it all turns out (other than the simple fact that yes, Gusev does die at the end), here's the conclusion of the Garnett version:

The soldiers and the officers crossed themselves and looked away at the waves. It was strange that a man should be sewn up in sailcloth and should soon be flying into the sea. Was it possible that such a thing might happen to anyone?

The priest strewed earth upon Gusev and bowed down. They sang “Eternal Memory.”

The man on watch duty tilted up the end of the plank, Gusev slid off and flew head foremost, turned a somersault in the air and splashed into the sea. He was covered with foam and for a moment looked as though he were wrapped in lace, but the minute passed and he disappeared in the waves.

He went rapidly towards the bottom. Did he reach it? It was said to be three miles to the bottom. After sinking sixty or seventy feet, he began moving more and more slowly, swaying rhythmically, as though he were hesitating and, carried along by the current, moved more rapidly sideways than downwards.

Then he was met by a shoal of the fish called harbour pilots. Seeing the dark body the fish stopped as though petrified, and suddenly turned round and disappeared. In less than a minute they flew back swift as an arrow to Gusev, and began zig-zagging round him in the water.

After that another dark body appeared. It was a shark. It swam under Gusev with dignity and no show of interest, as though it did not notice him, and sank down upon its back, then it turned belly upwards, basking in the warm, transparent water and languidly opened its jaws with two rows of teeth. The harbour pilots are delighted, they stop to see what will come next. After playing a little with the body the shark nonchalantly puts its jaws under it, cautiously touches it with its teeth, and the sailcloth is rent its full length from head to foot; one of the weights falls out and frightens the harbour pilots, and striking the shark on the ribs goes rapidly to the bottom.

Overhead at this time the clouds are massed together on the side where the sun is setting; one cloud like a triumphal arch, another like a lion, a third like a pair of scissors. . . . From behind the clouds a broad, green shaft of light pierces through and stretches to the middle of the sky; a little later another, violet-coloured, lies beside it; next that, one of gold, then one rose-coloured. . . . The sky turns a soft lilac. Looking at this gorgeous, enchanted sky, at first the ocean scowls, but soon it, too, takes tender, joyous, passionate colours for which it is hard to find a name in human speech.

Tickets and event details available at breakingstring.com and 512-761-3247. Run time: 60 minutes.
VIP TICKETS
Want to make your night out extra special? Purchase VIP tickets and we'll reserve you in the best seats in the house, plus you'll receive a free adult beverage, courtesy of Dripping Springs Vodka. 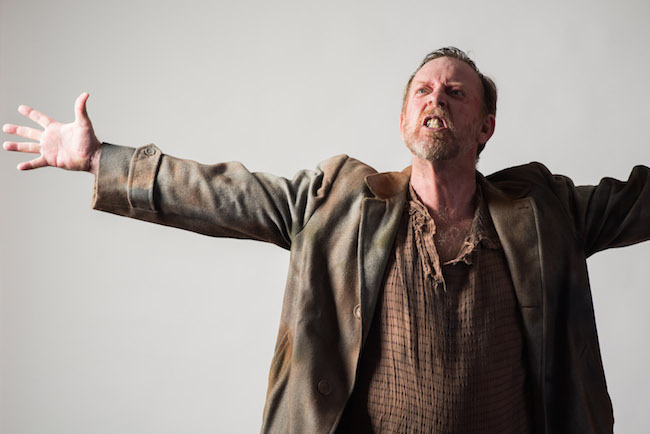