The title doesn’t tell you what to expect.

The grim black and white poster image of bound hands is purely symbolic, because you aren‘t going to see anyone tied up or physically abused in this play.

The violence here is verbal and psychic, couched in strong male language common in everyday life but raw and powerful on stage. Mamet gives us a world of men locked in economic competition, where unscrupulous winners get privileges and hard-pressed losers use ruses, take risks and break laws in the effort to make sales and commissions.

This is an ensemble piece, setting up the six principal characters for us two-by-two in the first half and then bringing them into the equivalent of a locked-room puzzle in the second.

All are involved in a sleazy real estate firm that pits them against one another with an explicit competition in sales closings, with the winner getting not only a Cadillac but preferential access to the best sales leads, virtually guaranteeing he will prevail in cutthroat competition.

Those “leads,” coming from who knows where, are the McGuffin of the piece. They’re the principal target of a burglary that takes place in the intermission between Act I and Act II.

Solving the mystery of the burglary is only one part of the action. Mamet’s greater interest is in studying the extent to which brutal personal competition undermines ethics, morals, friendship and the rule of law.

One can read Glengarry Glen Ross on several levels. There’s a socio-economic analysis. These men are exploited and corrupted by the unseen owners of this office and by their equally invisible rival who wants access to those “leads,” the passkeys to sales, money and power. Each salesman is locked in a cynical zero-sum game, creating nothing of real value and enriching the absent owners.

There’s the tribal approach – the four middle-aged salesmen trapped in a declining real estate market are bound by rivalries, hatreds and an angry, suspicious form of friendship, particularly when facing outsiders such as the long-suffering office manager, the duped client, and the investigating policeman.

The easiest approach: the four salesmen and their manager are Mamet’s conjugations of The American Salesman. He makes them unsentimental, foul-mouthed avatars of Willy Loman, achieving various degrees of sales success.

Or leave the intellectualizing until afterwards and just let these characters happen to you, with all the aggressive energy of a gladiator fight. 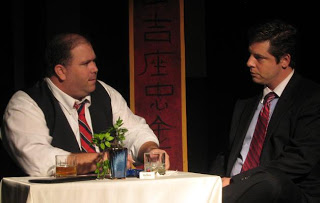 The “two” scenes – three of them – in the first act take place sequentially in a Chinese restaurant near the office. Unkempt, blustering salesman Shelley Levene (Wray Crawford, left) is on the skids, desperate to get access to quality leads. Over whiskey he berates office manager John Williamson (Bryan Headrick, right), first trying to bully his way into preferred access to “leads” and eventually resorting to an attempt at bribery.

Subsequently at another table in the restaurant smooth-talking Dave Moss (Conrad Gonzales) grouses to fellow salesman George Aaronow (Gil Austin), maneuvering him toward the idea of breaking into the office to steal the leads and sell them to a leading rival. And then we see two guys at the bar. One of them, tired, loquacious and adamant in bar room philosophizing, turns out to be Ricky Roma, the salesman leading in the competition. His reticent, tongue-tied new acquaintance is James Lingk (David Christopher). Ending the scene in a flourish of bonhomie, Roma pulls out a real estate prospectus.

Act Two takes place in the trashed real estate office, with an irascible police detective (Heath Thompson, left) hauling staff and salesmen offstage one by one for interrogation about the overnight burglary that left the place a mess. 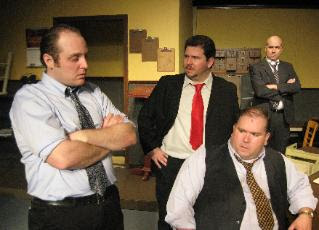 In fast-moving abrasive encounters the various Act One threads get tangled and then unwound for us. Ricky Roma (Stites, in the red tie) claims the top spot in the competition and the Cadillac that goes with it. Shelley Levene (Crawford, seated) arrives tremendously pumped because he has just made an $82,000 sale on a cold call without using a lead. Aaronow (Austin, right) is flustered and upset by interrogation. Moss is arrogant in his assertion of innocence.

Into this mess comes Roma’s new client Lingk (David Christopher), intent on escaping from a real estate commitment before the expiration of his statutory three days for reconsideration. 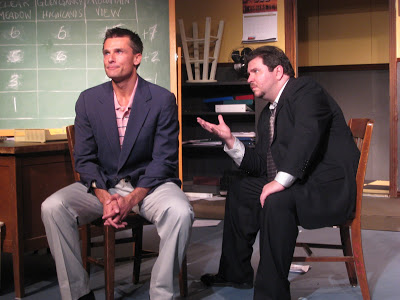 Roma plays him like a toreador, with misdirection, lies and cameraderie. Teaming up with the portly, elated Shelley Levene, he quickly has Lingk completely bewildered. Roma repeatedly dismisses the increasingly angered Detective Baylen as Roma and Levene go for the metaphorical kill.

Noxious winner Roma and the over-the-hill Levene, seeking a comeback, are Janus faces of the American Salesman. 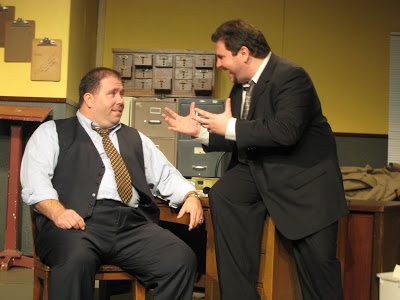 They match one another in this act in self-assurance and bombast, and for a time we can believe that in the midst of this spiritually murderous world we are witnessing friendship for the first time. Stites and Crawford play off one another with exciting bounce. Roma congratulates Levene, they recall the wildly successful times of the Glengarry and Glen Ross developments, and they plan further celebration.

Until Williamson the office manager provides devastating information about completed sales. Then Williamson puts ½ and ½ together and comes up with 4, a guess that gives the police the solution to the burglary. Leaving the absentee owners of this hellish, soulless office as the only real winners.

Well cast, acted with conviction and skill, Glengarry, Glen Ross is a sharp, cynical entertainment that leaves an audience wondering whether the events depicted constitute a comedy or a spiritual train wreck. The actors’ energy and control, with fine shading of the characters, win our sympathy for them. The superlative pacing of the action keeps us off balance and in suspense throughout.

Notch up another success for the City Theatre!

Ryan Johnson's review on Austin.com, heavy with comparisons with the film