The Penfold/Breaking String joint production of Ghosts is a moody, beautiful piece.  Its honesty to Ibsen's 1881 text is almost a disadvantage, for among us twentieth-first century chrononauts will be some who find inexplicable and inherently comic the restraint of his language.  How quaint not to name the evils:  prostitution, syphillis, debauchery, incest, spouse abuse, addiction, wifely duty, madness, social convention, obligatory purity for women, licensed libertinism for men . . . .

By retaining Ibsen's approach of creating in our minds the unnamed spectres which polite company will not name, director Graham Schmidt takes us back to the sharp blacks and whites of brittle European morality of the 19th century.  Never mind that in our own day we indulge and are indulged by broad fields of gray and we celebrate the colors of experiment and diversity.

The subtle set designed by Ia Ensterë captures that world, with a sort of spider web of  threads along the walls, wrapping the proper 19th century living space in an evocative indefinition.  Costuming by Buffy Manners gives visual reinforcement of time and place -- from Mrs. Alving's gown to the opposed masculine visions of Pastor Manders' Norwegian clerical black and Oswald's muted extravagance.

Ibsen wrote Gengånger -- Ghosts or, more accurately, The Spirits Who Return (in French: Les Revenants) -- in 1881. He had been living in self-exile from his native Norway for fifteen years by that time, supporting himself from sales of printed editions of his plays in Scandinavia and across Europe.  His damning portrait of conventional morality caused such a scandal that booksellers were obliged to return copies to the publisher. Europe's closely watched municipal and national theatres would not stage the play.   Its world premiere came in 1882 when a traveling Danish troupe did it in Chicago, where there was a large Scandinavian immigrant population and no effective censorship.    Ghosts was such a controversial property that it was a factor in prompting the establishment of independent theatres that could produce it -- the Théâtre Libre in Paris (1887, producing Ghosts in 1890), die Freie Bühne in Berlin (1889) and the private-subscription Independent Theatre in London (1891).  Eight years after Ibsen's death at the age of 78, the public performance in London of 1914 prompted the critical outcry in the Daily Telegraph that Graham Schmidt cites in his director's notes:  "An open drain. . . Gross, almost putrid indecorum. . . literary carrion. . . crapulous stuff." Those were epithets against a challenge to conventional morality written twenty-three years earlier.

Babs George is Mrs. Alving -- Helene, we discover in an unguarded moment -- the survivor of a shipwreck of a marriage with the handsome, socially successful and secretly debauched Captain Alving, deceased  of undiscussed causes.  She has completed the work of overseeing an orphanage to be dedicated to his memory, into which she has meticulously placed every øre of the fortune her husband brought into the marriage.  She has chosen as administrator of financial affairs the couple's former friend, the unmarried Pastor Manders -- to whom she fled during her first year of marriage.  Manders rebuked her then and sent her back to do her duty to her husband, and has not visited in the twenty-five years since that day. 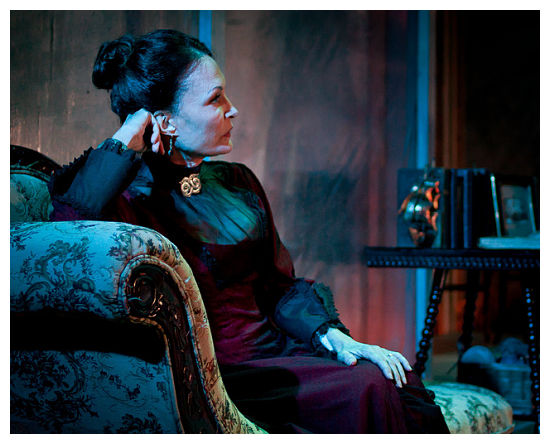 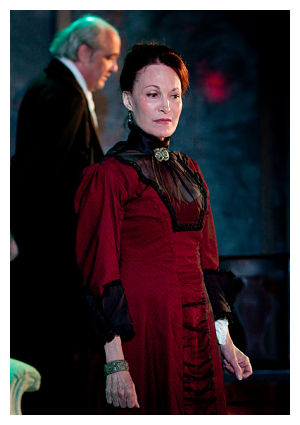 Mrs. Alving sent their son Oswald away to boarding school at the age of seven, to protect him from his father's whimsy and immorality.  He has just returned for the first time, at the age of 26, a well-dressed artist bohemian from the freer circles of Paris.

Ghosts is structured as a gradual, lengthy revelation to visiting good Lutheran Pastor Manders of the harrowing results of his counseling to Mrs. Alving twenty-five years earlier.  In the course of it we learn that in her letters to Oswald Mrs. Alving conscientiously falsfied the portrait of his father.  We also find out that her housemaid Regina is in fact Alving's illegitimate daughter and therefore half-sister to Oswald.

Babs George is courteous, strong, contained and desperate.  She inhabits the role, as so often she does -- she evidences depth and choked passion, a stoic clear-eyed acceptance of injustice and a devotion to the son whom she has in fact not known since his childhood.  Babs George could read me the classified ads on stage for an hour and I wouldn't have enough of her. 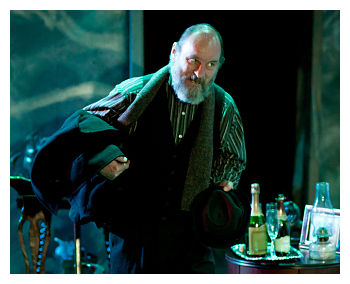 Travis Dean is an unerring choice for the canny, mendacious carpenter Jakob Engstrand.  More than twenty years earlier Engstrand accepted payment to marry the Alvings' pregnant housemaid.  He prevaricates, schemes and manipulates with the unselfconscious immorality of a troll.  In tandem with the revelations between Mrs. Alving and Pastor Manders we watch Engstrand develop his project of a seaman's home, proposed to the good pastor as a welcoming Christian shelter for seafarers but pretty obviously intended as a rowdy house in which Engstrand wants his supposed daughter to become the chief attraction and brothel keeper.

I re-read Ghosts before going to Penfold/Breaking String's very well attended 'industry night' performance on Monday night, and perhaps that was a mistake.  I wasn't in a position to be intrigued and surprised by the plot developments and the scandals revealed one by one like houses burning in the dark Norwegian night.  I'd formed a notion of the forces in this play, and I was dismayed to find that casting and interpretation brought about something quite different. 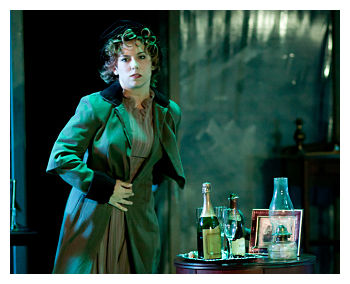 In my mind Pastor Manders had a righteousness that borders on blind evil; he incarnates the brute forces of society that made possible the destruction of Mrs. Alving, Oswald and Regina.  Our Michael Stuart's presentation of Manders is gentle, slightly scandalized and, eventually, bewildered.  His sins of omission confuse him.  And he's no match for the evil wiles of Jakob Engstrand.  The contest between these two men should resemble the struggle between the crippled devil and the strong church, or at least a bullfight, with Engstrand manipulating Manders' force at every turn.   Instead, Jakob leads Manders by the nose for a walk in the meadow.  And while that was going on I could not keep my eyes away from Babs George, seated motionless and silently listening from the chaise longue at far stage right. 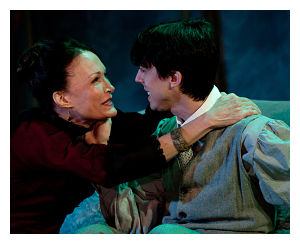 The concluding scenes regain the power of this haunted and haunting story.  Kim Adams as Regina the unacknowledged offspring is hope in expectation and strength in disappointment.  Ryan Crowder as the anguished and benumbed Oswald is more than simply a victim; as a convincing portrait of an artist no longer able to create, he's the ultimate condemnation of the irresponsible conduct of Alving -- and by extension that of virtually  all males of polite society.  No wonder London gentlemen were so scandalized.

Oswald's childish request as his burned-out consciousness dissolves is symbolic, haunting and paradoxically chilling.  "The sun, Mother, give me the sun. . . ."

Review by Elizabeth Cobbe for the Austin Chronicle, October 27

Review by Ryan E. Johnson on examiner.com, November 5 (the last day of the run) 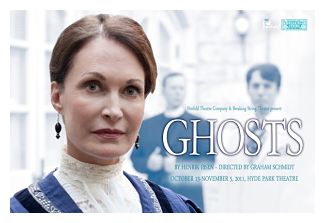