Freud’s Last Session, a one-act play by Mark St. Germain, has opened at Trinity Street Theatre in downtown Austin. This production of Jarrott Productions stars producer David Jarrott as psychoanalyst Sigmund Freud and Tyler Jones as writer-philosopher C.S. Lewis.They enact a fictional meeting between the two intellectuals at Freud’s office in London on September 3, 1939, the day Britain and its allies declared war on Germany following Hitler’s invasion of Poland.Freud had relocated to London earlier after being forced out of Austria by the Nazis. At this time very late in his career he was being treated for orofacial cancer.The premise of the play is that Freud has sent a letter to Lewis at Oxford requesting the meeting in his London office. Jarrott and Jones are the entire cast. The play and the discussion within it are built around biographies of the two men, particularly The Question of God by Dr. Armand M. Nicholl, Jr., credited in the show program.

It's largely a period philosophical and historical set-piece, debating the existence of God in the terms of that time, recognizing a discussion and sometimes violent dispute that has gone on in Western civilization since the time of Christ.

At the end of the 1930's and in the contradiction between Freud and Lewis, the debate centered on the issues of the divinity of Christ and the authenticity of the gospels and the Bible. Freud considered Bible stories and expressions of faith and spirituality to be symptoms of other things, mostly obsessive compulsions.To Lewis, of course, they were much more.  Speaking through St. Germain’s script, Lewis clarified the meaning of myth, setting forth learning he had gained from his friend J.R.R. Tolkien.Myths clarify life and the universe in ways that cannot be expressed in any other way. The life of Christ, however, cross-cuts all mythologies.  Tolkien’s insight led directly to Lewis’s conversion experience, which Freud of course derides. This Freud/Lewis conversation, although apocryphal, has greater meaning for modern audiences than it would have had in 1939, considering that the Ring Trilogy was not published until about 1955, bringing Tolkien enduring fame. 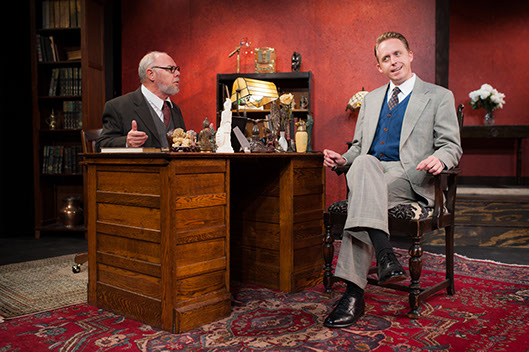 The issue of mythology clearly delimited Freud’s psychoanalysis, perhaps keeping it from attaining cross-cultural significance. Freud famously collected statuettes from world cultures for his desk and bookshelves—Athena, Eros, Osiris and others. Lewis points out “the dead gods guarding your desk,” implicitly myth-bearers from whom Freud had learned little.  Freud’s response is mild, deflecting the jab by calling his collecting little more than a hobby. Surprise!This came from the author of Totem and Taboo, a fictional story of a tribal society that sought to structure some of his hypothesized constructs in biology and culture. The book has no basis in early twentieth century anthropology and prehistory, yet Freud said that the society so described must have existed in earliest antiquity. Would that Freud had elevated his hobby to the level of research.

Freud was not entirely lame about mythology and its sources and uses.He tellsl Lewis he truly enjoyed Milton’s Paradise Lost and asks Lewis very pointedly why Lucifer had all the best poetry in the story.  Here Freud and St. Germain draw attetntion to one of the priceless gems of Western literature. Lucifer’s poetry is the dark side of John Milton’s imagination, milked in fulsome detail from his dreams by his scribe daughters upon Milton’s arising in the morning.Myths, dreams, and imagination have in part the same sources.This bit in the play may be an allusion to Freud’s Dreams.

Freud’s emphasis on dyadic relations as explanations for compulsive behaviors and mindsets is fully aired in the play.  The interlocutors agreed that their stern fathers, Freud’s Jewish, Lewis’s Christian, drove them from faith when they were young men.They found their Exoduses, respectively, to be liberation. In psychoanalytic practice Freud viewed God as an overarching father figure that the truly compulsive--or fanatically faithful, or seriously damaged--struggled to escape or conquer, with widely varying lifetime results. 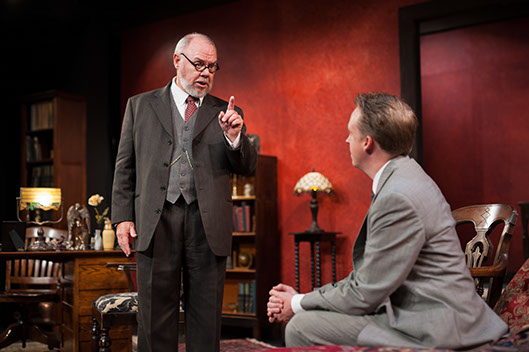 And then there’s sex.  Both pry into the other’s private life and detect a whole lot of repression variously manifested.  Lewis lived with an older woman with whom he had an asexual relationship (his mother died when he was very young).  Freud professes to believe in free love, but he confesses a slavish devotion to his wife whom he had met at an early age. It becomes evident also that Freud is opaque to certain issues with his daughter Anna. She was unmarried at the time, quite possibly because Papa Sigmund was keeping men away from her.  She was also the only person, he said, that he allowed to touch his mouth, including all medical personnel.  At his pronouncement, Lewis merely strokes his own chin and turns away.

Neither deals with the issue of God and human suffering.Perhaps no one can. Freud the atheist seemed petulant, out to punish God by not believing in him for inflicting pain on his family.  Lewis the believer offers only trite explanations for why God allows human suffering.  Neither offers any palliative for it.

The play is content-rich, for all its being a one-hour-plus dialogue between two somewhat restrained Edwardians. Perhaps concerned that audiences would grow restive at a limitless dialogue, Director Fritz Ketchum sends her actors over every square inch of the stage to deliver their lines. Some of the cavorting was not believable. C.S. Lewis entered and was invited by Freud to sit in a chair at the desk. Tension built for several minutes as dialogue proceeded and Lewis ignored the hospitality. As Edwardians would say: not done.

The actors are to be credited generously for delivering an essentially unbroken dialogue through the long one-act, broken only for radio-listening and false-alarm air raids. Both Jarrott and Jones delivered their lines clearly in dialect without obviously falling out of their respective dialects.  Credit for this quality performance also goes to Dialect Coach Amanda Cooley Davis and the good acoustics of Trinity Street Theatre. One complication in dealing with the long dialogue, however, was their at times mismatched intensity.  Jones’ C.S. Lewis begins the play apologetically, assuming Freud had called him in to berate him for Lewis’ satirical portrayal of Freud in Pilgrim’s Regress. Freud denies this with mild welcoming statements but later toakes offense at some line that flies by.  Lewis heats up on cue and flames back with a one-liner. The play largely described a game of emotional ping-pong in this way rather than following an emotional arc or pathway. That approach did not serve the end of the play, when the emotional responses between the two became more quiltlike in coloration, suggesting the men might have become friends, sharing life if not spirituality. 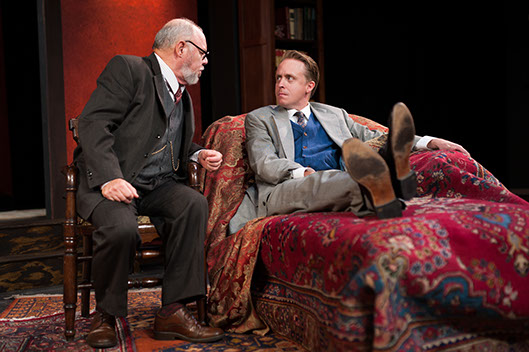 Jarrott’s Freud relied too much on pointing and jabbing his finger to make his rhetorical points. That was likely another Edwardian no-no, not an expression of aggression any therapist was likely to cultivate. Yet another minor irritant in the presentation was the dog heard barking offstage.  Freud said his dog was a chow and made much of him.  The recorded off-stage bark was that of a hound or a setter or another good barker type.  No self-respecting Chinese war dog would imitate a hound or setter for theatrical purposes.  And anyway, aren’t chows supposed to be mute?

The other design fields were forgettable, save for Leslie Ann Turner’s near-period set in red and earth tones. The other fields supported the dialogue-heavy play, but no more than that.

The intellectual debate on God has changed and evolved since Freud’s and Lewis’s time, shifting more into the scientific and evolutionary arenas.   Freudianism has waned as a school of psychoanalysis.  Freud makes a passing comment on Darwin, saying he likes him, but then there was no discussion in the play of Darwin’s effect on theology and science. Nowadays, thinkers war over the Big Bang and its significance, whether it is the primary creative act, no endless regress, or the proof that something can come out of nothing, a la Richard Dawkins (author of The Selfish Gene and other books), Sam Harris, and Stephen Hawking. In this light, too, the dispute over evolution has shifted and changed as well.  Even with the synthesis of genetics and Darwinism, the change mechanism hasn’t yet been fixed—genetic reproduction is a means of guaranteed replication, and most mutations die out.  Paleontologists such as Stephen Jay Gould and colleagues who’ve developed punctuated equilibrium have largely abandoned Darwinism, pointing out the very early appearance of forms that turn the Darwinian picture of change topsy-turvy (complex forms earlier than simpler forms, etc). Into the mix one may add progressive, liberal Christianity and Judaism (and probably Hinduism and Buddhism) that embrace evolution as the ongoing, still unfolding creation from the Big Bang and into the future. To these believers, the Biblical Six Day Creation myth remains an utterly valid metaphor, written down or revealed in ancient times, that still gives the best and scientifically most harmonious explanation of how we came to be on this earth.

The terms of the debate since the time depicted in Freud’s Last Session have shifted and shifted again.  The play collects grand thoughts from people in an important time and place, and fossilizes them beautifully in the amber of this Jarrott Productions show.  This is the significance of Freud’s Last Session.  The play is recommended for all thinkers; it runs until October 18, 2015 at Trinity Street Theatre, 9th and Trinity streets, Austin.

Wednesday through Saturday performances will begin at 8 p.m. and Sunday matinees start at 2:30 p.m.

Tickets are $20 for general admission or $15 for seniors (60+) and students with valid IDs. Patrons can purchase tickets at www.jarrottproductions.com. 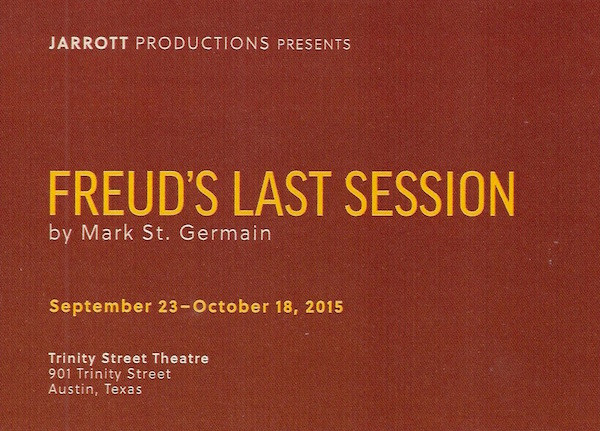