In casting about for Shakespeare plays to mend with his own distinctive language and imagining, Kirk Lynn did well to choose Timon of Athens. It was published in the First Folio of 1623 and not much seems to be known about its history. Timon has the full five acts characteristic of Shakespearian and Elizabethan drama, but they're an awkward and uneasy assembly. It's easy to suppose that this piece, appearing seven years after Shakespeare's death, is the theatre company's script begun and written in part by Shakespeare but completed or altered by another hand, quite possibly that of Thomas Middleton. And, to quote the character of Timon as he rails in Act IV, Scene 3, "'Tis not well mended so; it is but botched."

The playwright notes some of the inconsistencies in his entertaining note in the  program ("What Was Kirk Ever Thinking?"). Despite some vivid verse in iambic pentameter Timon of Athens seems notional, a loose bag of characters thrown at a concept and not fully articulated into a story. It's rise and fall. Wealthy Timon gladly rids himself of his fortune with extravagant gifts to all comers and banquets open to all. His faithful steward reveals that the coffers are empty and carefree Timon is leveraged out over a financial precipice. Timon's former friends refuse to assist him, and Timon retires to the forest in bitter rage to rant and rail, prepare his epitaph and perish. The steward encapsulates this action in II, 2:

Ah, when the means are gone that buy this praise,

The breath is gone whereof this praise is made.

These flies are couched.

The plot is repetitive, somewhat random, and it features lots of wrangling with and among purely incidental characters such as servants, messengers, thieves and camp followers. The only figure of stature comparable to our protagonist Timon is Athenian warrior Alcibiades, but the paths of the two scarcely cross. Alcibiades sits in on a banquet at Timon's house, almost without speaking. In III, 5  Alcibiades confronts  senators on an entirely unrelated and not entirely explained matter of military discipline. Later while leading his troops against Athens the warrior passes by Timon's grotto in Act IV and stays long enough to play straight man to Timon's rants. Alcibiades returns in the final scene to cow the perfidious senators and read Timon's self-composed epitaphs.

And whatever was Kirk thinking? In few, to take this sow's ear and to turn it into a silk purse. Not one from the early 17th century of King James but rather one that's well constructed, hand sewn, brightly spangled and furnished with language of 21st-century pungency, including a liberal supply of crass insults, f-bombs and stark emotions.

Lynn reduces and recasts the original's random crowd of characters, and most of those he retains he keeps onboard for the whole five acts. For example, the First Folio text opens with an unnamed 'painter' and 'poet,' a couple of sycophants. Lynn gives them names, aims, distinctive characters and a friendship and brings them back repeatedly through the story. He establishes an early bond between Timon and Alcibadia, woman general of the Amazons, and he gives both of these leading figures trials and miseries. Each responds in character, thereby filling out the moral complexity of the tale. 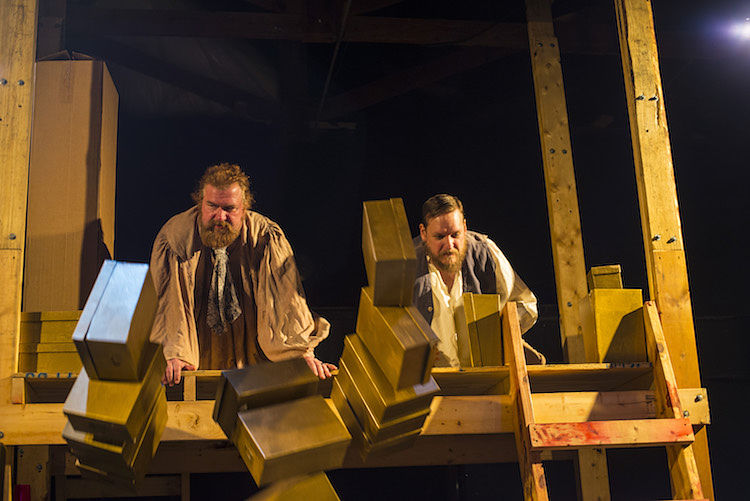 In the original the misanthropic Apemantus floats through the plot as an unattached contrarian commentator. Lynn replaces him with an angry and troubled woman servant to a lecherous drunken senator stabbed to death by the Amazon general. Eros, the love god who in the original appears only in a festive dance at the opening banquet, becomes a celebrant and sex worker who knits plot and themes throughout, including a striking moment of direct address late in the first act that picks the pockets of the audience and challenges their distance and self assurance.

Just as creative as these innovations is Lynn's invention of a previously unrevealed running courtship between Timon's worried faithful steward Flavia and the wealthy Vinnie (previously the walk-on/walk-off character Ventidius). Lynn imagines Vinnie as heir to the slain senator and gives him lines of betrayal originally assigned elsewhere. Allegiances to Timon are tested. Flavia is capable, loyal and determined, while Vinnie is weak and selfish as he claims that his refusal to help Timon is evidence of principled impartiality. They are living in different worlds, as Flavia hotly proclaims -- divided not just by social rank but by their understandings of fidelity.

As a result Lynn's story has much greater coherence of plot than does the original. Also striking and disconcerting are the plain language and crude metaphors he puts into the mouths of these characters. Timon snaps back to one questioner, "Yeah, and the sun might come out of my asshole -- won't happen!" The sneering bout between the malevolent Apemantia on one hand and the poet CeeCee and the painter Braymont on the other offers particularly foul insults. But though 'fuck' and 'fucking' are routinely used as punctuation and for emphasis by many of the characters, this is not mere gutter talk. Stewart Flavia, exasperated at Timon's inattention to his disastrous finances, cries, "I could have worked for a bear cub if I wanted to put my life into the hands of a big fucking baby!" The playwright gives Alcibadia the redoubtable Amazon some distinctive expressions that hint at her lack of mastery of the prevailing language, but they're linguistic flourishes and not entirely consistent. 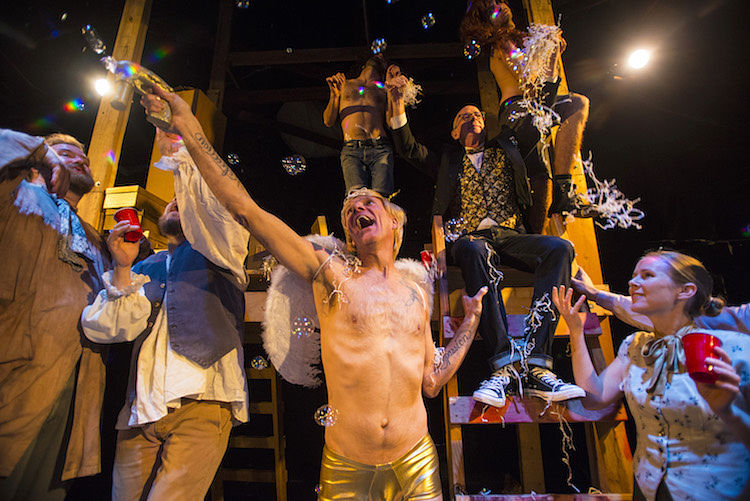 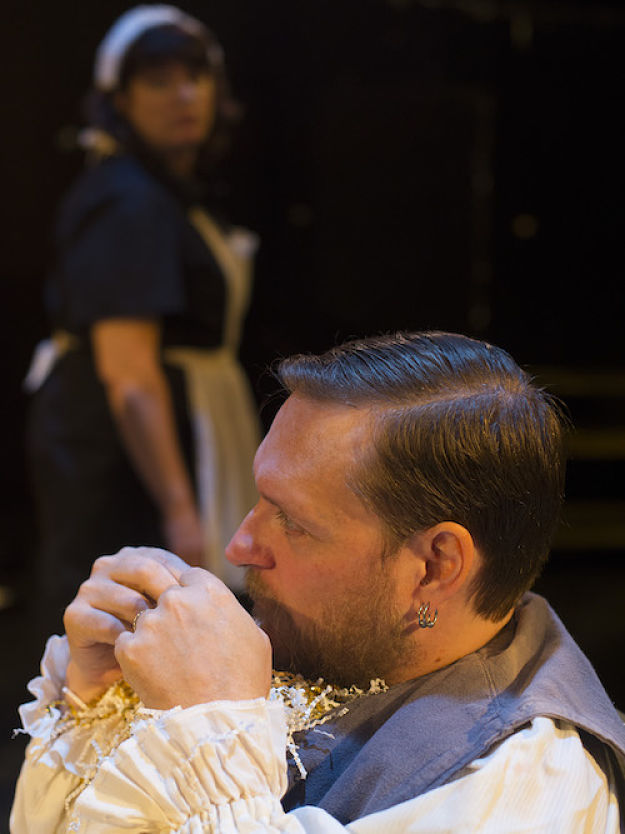 Direction by Madge Darlington and Alexandra Bassiakou Shaw sets an intense pace for the events, and this cast knows how to ride that rhythm. The rise-and-fall trope of the original is preserved, but there's a disorienting shift of tone. The early vulgarities dare us to laugh, and Tom Green in the title role is of such antic disposition that much of the first act seems like a Molière comedy spoken in 21st-century guttertalk. With smirk and reedy voice Green establishes Timon in our minds as an insouciant lightweight, so the character's bitterness and curses after his turn of fortune are unconvincing, the petulance of a baby not yet out of his swaddling-clouts.

Ellie McBride as Timon's faithful friend Alcibadia the Amazon has gravitas aplenty, along with directness and ferocity. The playwright ties fates of Timon and Alcibadia, and he grants Alicbadia a greatness of heart and forgivenness that Timon lacks.

Lynn's clearly a feminist (and bravo for that), for this is one of three major characters whose gender is changed. Elizabeth Doss as Flavia the stewart is a loyal striver protective of her master Timon and independent of her suitor Vinnie; Barbara Chisholm as the grimly sorrowful Apemantia comes across initially as a sour bully but is gradually revealed as a person of depth and great sorrow (no thanks to Shakespeare and his putative co-authors). Chisholm's numb mourning for the deceased senator is haunting. Lynn creates for her perhaps the most affecting speech in the piece, her description of the 'cloud of sorrow' that covers her and so many others of the neglected, the plebians and the women. 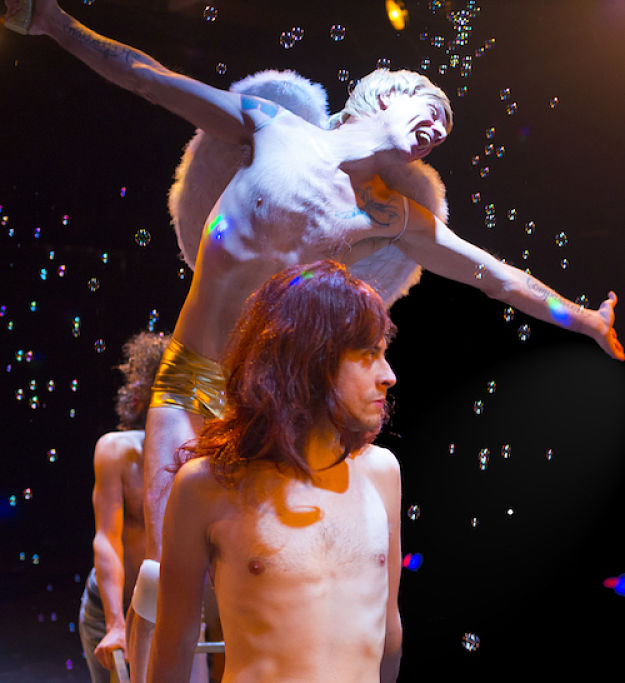 Remaining characters are various lesser beings.  Nate Jackson and Vince Tomasino do quadruple or quintuple duty as all-purpose servants, haughty senators, dancing boys and thieves. Robert Faires' Vinnie is mostly a plot device in a stocking cap: a foil as Flavia's suitor and an exemplar of the feast-won, fast-lost acquaintances of Timon. Lowell Bartholomee as the lugubriously drunken painter Braymont and Robert S. Fisher as the duplicitous conceptual poet CeeCee flesh out those characters and create the bond that Lynn imagines between them. Jay Bird as Eros in golden hot pants moves as Timon does, from glee to grief, but his transition from clown to victim is more affecting than that of Green -- perhaps because it's much less expected and less burdened with invective.

Sets are rudimentary and repurposed. The Rudes indicate they took their inspiration for  the wooden platforms at either end of the long bare rectangular space from the designs for Dionysus in '69, which they re-enacted in 2009 in the next-door studio space. When you enter the theatre you'll find several cast members wandering about and greeting acquaintances. There's box wine and underpressurized draft beer available to audience members (if over 21 years of age). Loud music with a hectic heavy beat lets you know that this is not going to be your Grandma's Shakespeare.

Fixing Timon of Athens is rich and strange and it merits revisiting. I was there for the opening and returned as a walk-up the following weekend. Pleasures of this evening are many, complex and often surprising. When the Rude Mechs open the box you never know what's going to pop out, but you do know that it'll be mischievous and multidimensional.

Click to view the program for the Rude Mechs' production of Kirk Lynn's Fixing Timon of Athens. 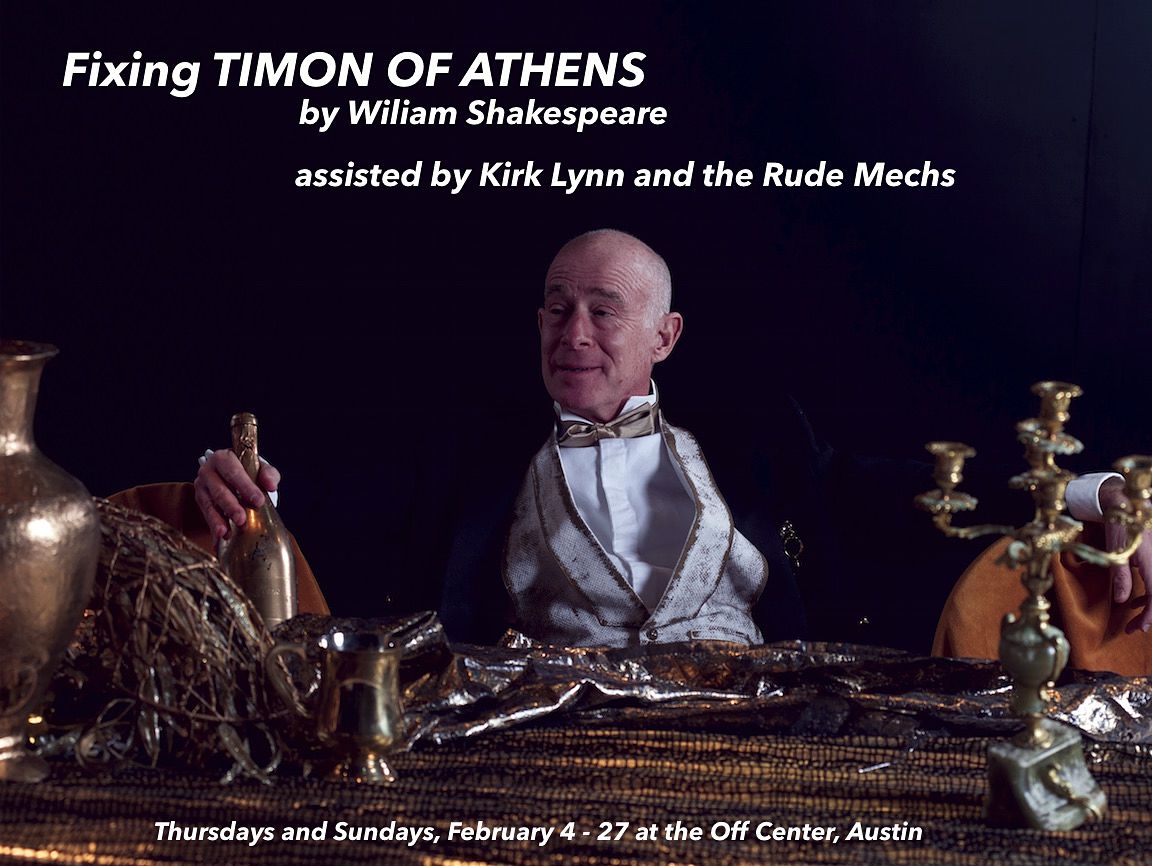