It’s a good thing that the Hill Country Community Players out near Marble Falls post a map on their website. When I keyed in “4003 FM 2147 West, Marble Falls, TX 78654,” Google Maps gave me a location that was a tortuous ten miles away from their locale. Google would have sent me way east of US 281, when in fact the HCCT is located on the road running by Cottonwood Shores in route to Lake LBJ. That’s about six miles west of Marble Falls. Driving west along FM 2147, it’s just after the Esso station.

Driving is, after all, a major theme of the second play of HCCT’s season. But not the principal one – this three-person piece is also a deft, humorous examination of cultural differences, employers and employees, and ageing. As much as anything else, it is a look at friendship – and love.

There’s no way to escape the fact that the 1990 film of Driving Miss Daisy was a huge success. It won 4 Oscars including Best Actress for the 81-year-old Jessica Tandy and recognized with Oscar nominations for Morgan Freeman (best actor) and for Dan Ackroyd (best supporting actor as Booley, the son). HCCT, programming like any sensible community theatre, chose this title because it was likely to attract an audience looking for comedy and a warm feeling. To put “rears on seats,” to paraphrase the British expression, and it appears to be working – 24 hours before the Thursday night opening the staff had about 120 reservations for the modest 134-seat theatre.

This production works well, on its own merits, thanks to excellent casting and capable direction by Glen Bird.

As the stern Miss Daisy, removed from driving after crashing a three-week-old car, Sally Stemac is all straight lines and angles, terse and dismissive; as the chauffeur Hoke, Robert King, Jr., is round, happy, simple of heart and straightforward. Miss Daisy resents his presence but eventually gives way to her need for transportation to get to the market and to the synagogue in Atlanta.

The two acts of the piece encompass 25 years of change, including most tellingly the rise of the civil rights movement, hate crime reactions and a testimonial to Martin Luther King.

This is a comedy of character, not one of farce. The pace is deliberate, and the relationship builds gradually before our eyes. Robert King, Jr., gives us Hoke as an uncomplicated man, eager to help, easy to laugh and gently insistent on his own dignity. As he drives, his chin is uplifted – in part to watch his passenger in the rear-view mirror, in part as a sign of his consciousness of his responsibilities. Sally Stemac in the rear seat is always precisely folded and rigorously attentive. 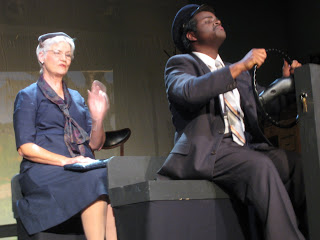 There’s a great moment that shows that she has relaxed into the relationship with Hoke -- making comments on the awful singing voice of one of her women friends, she breaks suddenly into a caterwauling Alleluia, all the funnier because she doesn’t crack a smile, herself. Hoke takes it in stride. 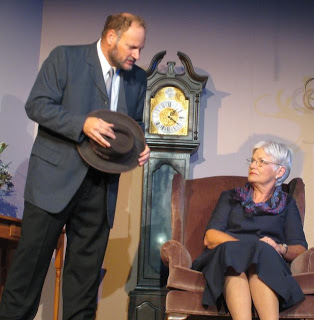 Anson Hahn is the earnest and occasionally harassed son Boolie – an impressive presence in his own right, mediating as necessary but as unfailingly firm, fair and courteous as any good Southern gentleman.

Actors’ accents captured the gentle roll of the Southeast. I felt entirely at home with these characters, in large part because I come from the same region of the country. (I swear to God, I really did hear relatives saying, “She’ll snatch you bald-headed!”)

This was a far more believable depiction of relations both across cultures and across religions in the 1950s/1960s South than, for example, the neurotic Carolyn or Change, which has just concluded its run at Austin’s Zach Theatre.

Despite this, the piece is not saccharine. Outside events intrude on the close but well-defined relationship between Hoke and Daisy. She is taken aback to find that the synagogue has been bombed; Hoke is matter of fact about the haters who committed the act. He tells her of seeing the dead body of a childhood friend, lynched and left hanging from a tree with hands tied behind him.

The one serious difference between them comes when he is offended that she seeks at the very last minute to give him her tickets for a dinner honoring Martin Luther King. Not because of the gift – rather, because under pressure from her son she is trying to discharge her responsibility by shoving them off on him.

By the end, age has brought Miss Daisy to hospital care and failing eyesight has removed Hoke from behind the wheel. The final scene and blackout show us that the bond between them remains strong. Perhaps even stronger than blood ties.

HCCT is a relaxed and welcoming venue. On the “sneak peek” Wednesday, the stage manager, the director and Executive Director Jim McDermott came around to greet all of us in the relatively sparse “Free Night of Theatre” crowd. Both before the performance and at intermission we could hear backstage conversations between actors and production staff, and after the curtain call the actors moved quickly out to the lobby to greet us. With that kind of reception and that quality of entertainment, we’ll have every reason to go back. 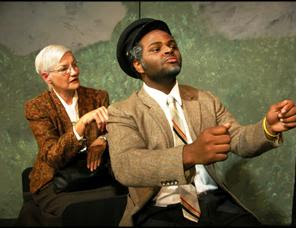