I met -- and avoided -- Dracula at an early age. Mly sixth-grade friend Charlie was fascinated by the classic narratives of Gothic horror, Bram Stoker's Dracula and Mary Shelley's Frankenstein. He pressed them upon me, but their quaint and creepy 19th century style was too much. Reading their prose was like pulling a dust-laden velvet curtain back to look for a corpse in a coffin. Later I absorbed the 'horror movie' images of both, comfortingly comical, and I smiled at send-ups by Charles Addams, Mel Brooks and (Jeez!) Sesame Street. The infernal duo remained in my mind pretty much as a pair of super-antiheroes relegated to a bizarre but comic world.

But suppose you take the Transylvanian undead count seriously? In 1996 playwright Stephen Dietz remounted the elements of the source text, preserving its incongruities and Christian symbolism. Director Melissa Vogt has assembled a capable cast to play it damn straight in a production that stirs the ancient fears in a sticky stew of death, sexuality and malevolence. Dietz's rendition is no place of comedy, and there wasn't a single giggle or titter amongst the full house all evening long.

Stoker's is a a world of menacing contrasts, typically between the healthy innocent and the damned who are devoted to feasting on blood, virginity and life force. Dracula's aversion to light reminds us of that. Playwright and director make the point from the first instant. Charles P. Stites sits in the playing space, affably welcoming us into the theatre, a nod here and a murmured greeting there. He's a reservoir of calm and bonhomie. And after the assistant director's announcements and reminders, Stites erupts into the madman Renfield. Attendants tear away those evening clothes and slam the screaming man into a padded cell at stage left where he stays, howling and ranting periodically, until near the end of the action.

This is the sort of role at which Stites excels -- a chance to chew the scenery while clamping our belief in him tight with the emotional intensity of his interpretation. 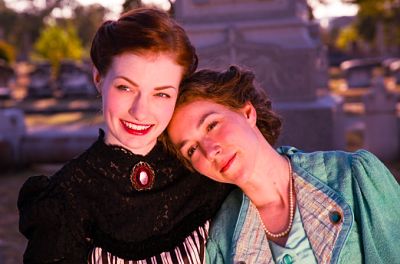 Sweet female friends Lucy (Jessica Riley) and Mina (Taylor Flanagan) gossip about their prospective beaux and cuddle in innocence. One will wind up a pale and threatening devotee of the count, and the other, harvested of blood, will slide toward similar eternal damnation and unchastity. Stalwart upright eligible English bachelors struggle to redeem her. Three similar female victims erupt periodically through the walls in billows of green-tinged smoke to convince us that the menace is real.

There's a fair amount of murk in Stoker's plot and Dietz's crafting of it. The anti-Dracula expert Van Helsing, a Dutchman (Beau Paul), is summoned by timorous Dr. Steward (Trey Deason) and joined eventually by Mina's fiancé Jonathan Harker (Will Douglas), inexplicable survivor of a visit to Dracula's castle. Van Helsing responds because Dr. Steward saved his life (not further explained), and much of the play is consumed by Van Helsing's adamant but unexplained pronouncements about the evil embodied by the count. If he represents 19th-century science, Van Helsing does so convincingly, for his apparent knowledge is loudly confident and often wrong. There's an unkind contrast between Van Helsing's vigor and the ineptitude of the Englishmen -- in a thought experiment I envisioned recasting so that the slim Deason would be liberated from type-casting to lead the campaign against evil. 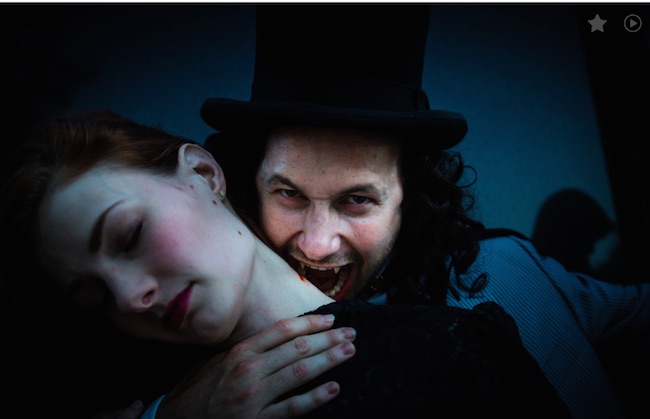 JM Specht's unctuous, chilly performance as Count Dracula is the glue that holds this formulaic plot together and makes it work so well. There's a touch of Lugosi there, but not so much as to be a parody, and director Melissa Vogt is careful to see that these antics do not push into the ridiculous. The riskiest but most effective moment is when the ill and wilding Mina ardently sucks blood from Dracula's chest, a flesh-on-flesh horror that sends a shudder through the audience.

The Different Stages production is darkly effective. For those like my sixth-grade friend Charlie who take Stoker and Shelly as seriously as the Kabbala, this one's a must-see. If you prefer Count von Count or Granpa Munster, you'd better stay away.

[cover photo of Taylor Flanagan and Will Douglas: Errich Petersen) 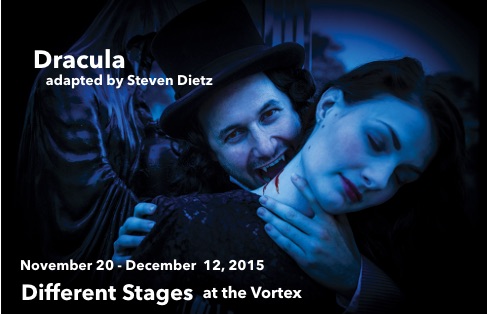