Faustus, why do you torment me so? This production of the work of the mercurial Christopher Marlowe, an exact contemporary of Shakespeare, stabbed to death in a tavern at the age of 29, held me at an uneasy distance despite its robust verse and stark dilemma.

Austin's Last Act Theatre Company, just over a year old, demonstrates its art and vaunting ambition in daring to take on this text. Their productions for love of the art have been low-budget stagings in a succession of found locales around town. Doctor Faustus is presented, appropriately enough, behind a tavern -- the Pour House on Burnett Road -- in an edifice in stone that must have been used as a garage, judging from the stout girders, chains and decommissioned hoist overhead. Lengths of black curtain mask the corners. The audience is seated in the depth of the room and the principal entrances are through the same wide doorway that gave spectators access to the space. Props are few and simple; director Kevin Gates relies on his cast of 13 to create this work in the style that it would have been done in a tavern courtyard or a church portico. 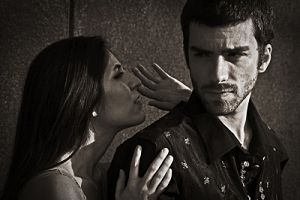 In theme and presentation Doctor Faustus is directly in the tradition of the medieval mystery plays.  Few texts of them are extant. Those works may have been largely improvised,  but both the French and English manuscripts that remain confirm the traditions of staging Bible pageants to communicate to the people the stories mostly sealed up in the impenetrable Latin of Jerome's Vulgate.  The struggle to translate the Bible into vernacular languages didn't really begin until the mid-1500's.  Marlowe wrote this text, his second drama, in about 1588 (before Shakespeare had produced anything he could put his name to).  It was probably based upon a German text of about that date, registered in English translation only in 1592.  To complicate matters further, Marlowe's work exists in two variants, the first printed in 1604 and the second printed in 1616. Theatre entrepreneur Philip Henslowe recorded in his account book for 1602 that he had paid two dramatists for additional scenes to be added to Doctor Faustus. The drama continued to be produced up until 1642, shortly before Cromwell and the Puritans closed the theatres. 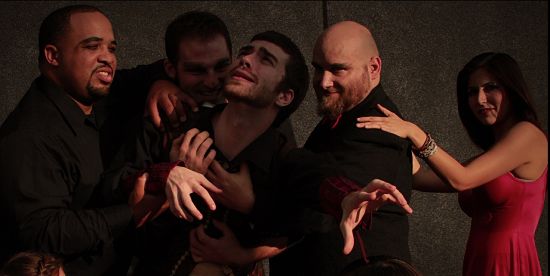 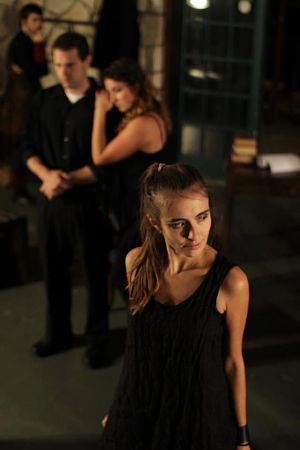 Adapter, dramaturg and director Kevin Gates constructed this script by scrupulously comparing and reconciling those two versions. He added very little -- some English to reprise passages of Faustian scholasticism that Marlowe had put entirely in Latin and half a line of verse in one passage where the meter strongly suggested an elision (might that be the surprising "Que será, será" ?).

I was relatively familiar with the text already, for I had reviewed it last year when preparing to deliver a talk on theatre and religion. I'd also studied Goethe's version of the story, an epic verse work that is one of the foundations of German literature.  I attended Doctor Faustus on opening night but went back a week later.  And now here I am, still wrestling with it.

The fable of Faust is fundamental to Western thought.  The learned doctor is familiar with the state of human knowledge -- law, religion and literature -- and he chooses to strive beyond human limitations by turning to necromancy. Faust literally sells his soul to the Devil in order to obtain superhuman powers in this life, knowing all the while that when his 24 years are up, eternal damnation awaits him.  That's the through-line here: the man has the audacity to aspire to greater knowledge and more experience than ordinary life offers. He is regularly admonished by a pair of angels, one good and the other bad, and even though the good angel assures him that God's grace is eternal, Faustus does not -- or cannot -- turn away from his pact with the devil. 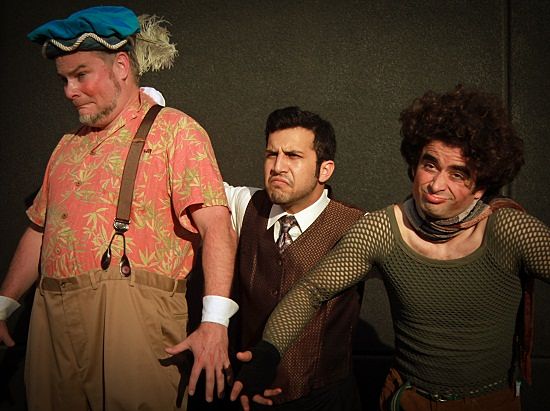 And along the way to Faust's damnation there are superbly comic scenes, cleverly and adroitly realized by this company.  It doesn't much matter that they probably came from pens other than Marlowe's, for they are the sugar that makes this bitter gall go down so sweetly.  The clowns are enchantingly funny: Robert Stevens as droll rascal Robin and Tony Salinas as his companion Dick just about walk away with the piece whenever they're on stage, and various members of the chorus exult in comic turns in other scenes.  Travis Bedard as the sanctimonious pope is particularly memorable.  Mario Silva as Faustus' factotum Wagner is a pompous little twit with much of the conceit of Faustus but none of his knowledge.

The eight-actor chorus provides the bit parts -- magicians, scholars, rustics, courtiers, assorted religious figures, mythic apparitions and even the seven individual deadly sins, but their fundamental and abiding identity is that of attendant demons.  The action is swift -- Marlowe's extant scenes are not lengthy -- and this is a banquet of incident,clowning and parody.  Mankind is afflicted with so much vanity, Marlowe seems to suggest, that this short life is inevitably comic.

Marlowe assigns certain stretches of text to a Chorus. Gates chooses to divide those lines amongst the group, so that the eight of them step forward in turn, each individually pronouncing a couplet or so. This makes these speeches somewhat difficult to follow, particularly since not all have the mastery of projection and diction that is required even in these close quarters. The most accomplished are Bedard, Molly McKee (the good angel) and Trevor Bissel (as a necromancer, an emperor and eventually as the voice exhorting Faustus to repent). 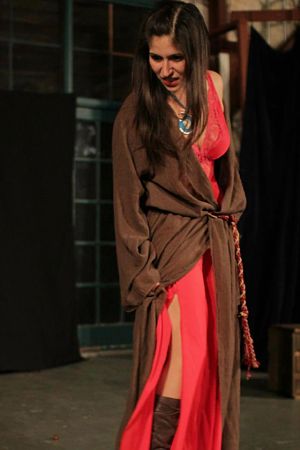 Karen Alvarado in that fiery red dress is a Mephistopheles of vibrant subtext.  She appears when Faustus summons her (the published text indicates that Mephistopheles initially assumes the shape of a dragon). Faustus commands Mephistopheles to transform instead into the shape of a holy friar.  Alvarado's arrogant response is to emerge from a fury of writhing demons with sackcloth draped negligently about her hips and shoulders with about as much reverence as Mae West might have shown.

Alvarado smoulders throughout and her affirmation that hell does, indeed, exist is particularly poignant. There is a subtle play of attraction between her as Mephistopheles and Ben McLemore's Faustus. His neglect of her as the story unfolds fuels a particularly dramatic moment of condemnation in the final scenes.

The performance of McLemore in this role disturbs me  He is certainly confident of his mastery of the text, but he speaks his Elizabethan prose with a speed and casual phrasing  that suggest a Faustus who's a callow and egotistical thrill-seeker. On a scale of theatrical diction ranging from Marlon Brando to Royal Shakespeare he would come down much closer to the American.

This is a morality play in which the protagonist stands between the stark absolutes of God and the Devil, heaven and hell, the throne of God and the fiery pit. McLemore's Faustus does not appear to pause to reflect seriously on any of this and comes across as a young man throughout. From my perspective a good deal farther along this mortal coil, his Faustus lacks weight and moral consideration. His anguish as the hounds of hell close in does not convince. 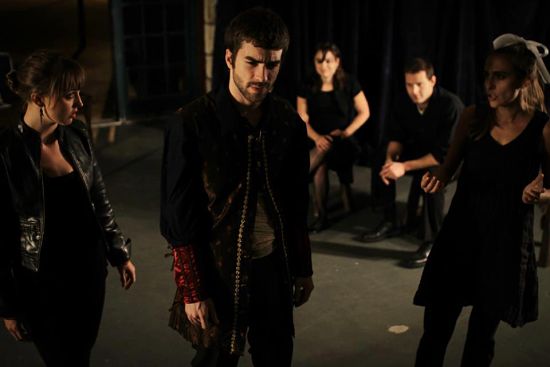 That's why I needed to go back and see this production a second time to understand how superbly it had been staged in all other aspects: I was too appalled on first viewing to see how heedlessly McLemore's Faustus had sold his eternal birthright for a mess of pottage. 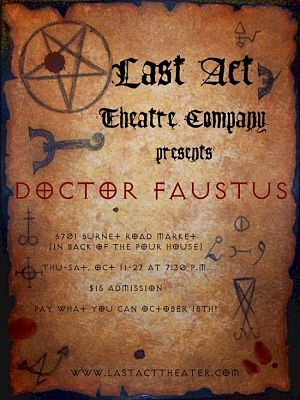