Review: Dionysus in '69 by Rude Mechs
by Michael Meigs

The Rude Mechanicals' Dionysus in 69 is a charming exercise in illustrative theatre historiography, one that captivates us by illustrating how sincere, how naive and how lucky we were to be living back in the dark, dark days of 1968.

Back in 1968, the Performance Group's interpretation of Euripides' The Bacchae resounded with the times. Their canny staging of the ancient classic about violence, ritual, unknowing and ecstasy scandalized conventional citizens and captured the imagination of the young -- that earnest generation of forty years ago who were about the age of the Austin's Rude Mechanicals today. 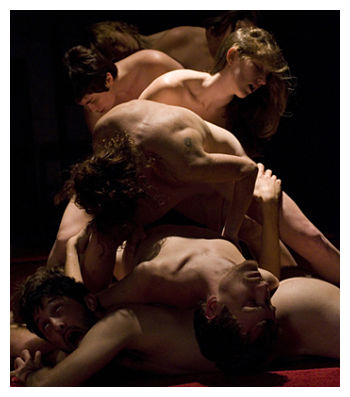 The nudity sold the show then, and the Rudes' press photos suggest that they understand well that aspect of the marketing. And these young folk are without exception all very handsome in their skins, displayed confidently and unselfconsciously in key group rituals portraying of birth, death, and murder.

The Rudes' re-enactment is based on films of the original and it benefits from workshops and discussions with Richard Schechner, director of that path-breaking production. Schechner is now a chunky eminence grise, a venerable elder and NYU professor. He was invited to Austin by UT's Humanities Institute and was scheduled for a discussion and talk-back for the second performance on Friday, December 4.

Audience members gathered at the Off Center on the chilly opening night. Reservations were redeemed inside, and the Off Center's familiar space was used a holding pen. As performance time approached, audience members were invited to a corridor behind the seating area and then fed singly through a doorway with a smiling semi-apology: "This is how they did it in 1969."

The new performance space is furnished with platforms grouped around a central performance space. The ten actors were already in exercise. As the audience member stepped in, Thomas Graves was doing yoga stretches and greeting newcomers mechanically, "May I show you to your seat? May I show you to your seat?" He did not make eye contact. There were few conventional seats. Audience members were left to settle as they chose on the mats covering the floor, beneath or upon scaffolded platforms, some of which rose double-storied above the playing area. Cast members in warm-up clothing were murmuring, twittering, cooing, conversing; they were stretching, rolling, doing slow-motion gymnastics singly or in pairs. The space seemed part warehouse, part aviary, part human zoo. The supple movements and the abstracted concentration of the actors in preparation were fascinating to watch. 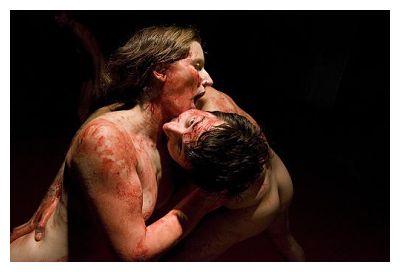 The central action of the evening is an interpretation of the piece by Euripides, outlined in a helpful brief in the program. In briefest of summary, the god Dionysus (Graves) has gathered followers, mostly female, who devote themselves to ecstatic rituals -- in the original, certainly fueled by wine, and with the generation of the Performance Group probably aided by other psychotropics, although these are not mentioned. 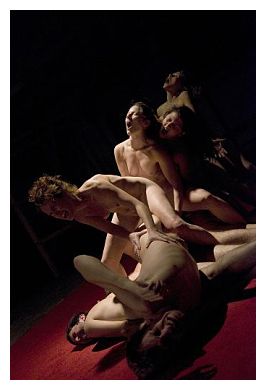 Actors shed clothes, the men lie prone and the women stand astride the group to mime a birth ritual, heaving one male forward beneath them in shuddering starts. Aghast at reports of these rituals is Pentheus, King of Thebes (the wild-eyed, thin and mistrustful Josh Meyer). Pentheus seeks to restrain the bacchantes, male and female. He meets some initial success but then they mock him.

The text deliberately confuses Euripides' characters, the 1968-69 actors and the Rude Mech actors. Graves as Dionysus challenges Pentheus, each of them in those triple personalities, and eventually seduces him -- initially with words and later, physically, unseen, in an understage area entered via a trap door. 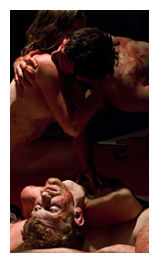 Actors invite audience members to dance to wild drumming rhythms.  Later they persuade audience members to embrace, to join them and to roll together in the playing area. This is an endearingly innocent orgy, clothed and friendly, reminiscent of encounter groups of the 60's and 70's. Dionysus returns, bearing the naked and enamored Pentheus piggy-back. As in Euripides, Pentheus is fascinated by all this ardor and wishes to witness it; the price for his voyeurism is his life. He is murdered by his own mother, deluded in her ecstasy to think that she is killing a mountain lion. Naked, the company mimes Pentheus' death, anointing themselves and him with facsimile blood.

Graves in the triple person of Dionysus/(William Finley of 1968)/(Thomas Graves of today) harangues the crowd about gods and power,as actors clothe themselves and clean up the blood splashes. He announces his candidacy for the presidency of the country. Actors chant their support and hoist him onto their shoulders. A door behind the playing spaces is pushed open, cold air gusts into the playing area, and Graves gleefully announces the end of the play as the chanting cast parades him out into the night.

This crude summary of the central action shortchanges the piece, of course. Its impact is the actors' seduction of the audience, both in mass and as individuals. The Rudes convince us that they harbor the ecstasy of the original bacchantes, and at every moment of the 90-minute piece they persuade us that we are all complicit in this altered consciousness. They step in and out of the Euripides, and they step in and out of 1968. The taunting of Pentheus is a series of withering insults to Josh Meyer the actor of 2009, challenging him to guess which of the cast members invented each gibe. Graves as Dionysus preens as godhead, as Finley of 1968 and as himself, son of his parents. The Rudes create a successful hectic and surge throughout.

No prurient action occurs -- unless you have mid-twentieth-century sensibilities and are upset by nudity. Dionysus challenges Pentheus to homosexual eroticism in burning words and with a passionate kiss but no further than than that in view of the audience. Otherwise, physical contact between actors is essentially caressing or gymnastic. They are enticing to their audience members but essentially gentle and non-confrontational.

Dionysus in 69 is more successful as a 'way-back machine than as an edition of Euripides, for the high-spirited, satirical use of a triple time line gets in the way of the original. Closest to tragic transcendence is the heated recital by one male actor -- Cadmus or the Chorus -- of Euripides' description of Dionysus' ruse: hoisting Pentheus into the top of a tree and then setting the bacchantes upon him.

A better and more frightening version of The Bacchae was staged by Austin Community College last year under the direction of Arthur Adair. Those performers were not carrying the burden of the Rude Mechs' reputation, however, and as individuals they did not have the Rudes' sense of mission.

Once again, the Rude Mechanicals intrigue us, challenge us, and set questions running through our heads about spectacle, truth, mimesis and meaning for our own time. They're beautiful human animals with fine synergy and a wicked sense of irony.

In a word, showmen.

Insightful first-person review by Thomas Jenkins of the San Antonio Current,which unleashed an avalanche of complaints that he was neglecting the San Antonio theatre scene, December 9

Kirk Lynn's lengthy notes provided for the Austin Film Society's screening of the Brian De Palma films of the original Dionysus in 69, December 8

Kirk Lynn's November 7 post about the new playing space and rehearsals of Dionysus in 69, on the Rude Mechs' blog, November 7

Dionysus in '69
by Performance Group, re-created by the Rude Mechs
Rude Mechs