William Inge's Bus Stop sets for its audience the classic 'closed room' story, except that it's not an Agatha-Christie style mystery. The mystery being pursued here is the quest for love.

It's 1 a.m. in the morning at a crossroads cafe somewhere west of Kansas City, well before the age of the Interstates. Cafe proprietor Grace and her young teen waitress are waiting for the arrival of the night bus, and taciturn Sheriff Will is sipping his eternal cup of coffee. A blizzard has closed in, blocking the roads, and even the telephone lines are down. Into this isolation comes the mythic bus to discharge a couple of cowboys headed back to Wyoming, an inebriated scruffy pseudo-academic and a desperate sweet young thing who immediately appeals to the sheriff. She says she's being abducted. Bus driver Carl, even-tempered and courteous, pretty much confirms that story. 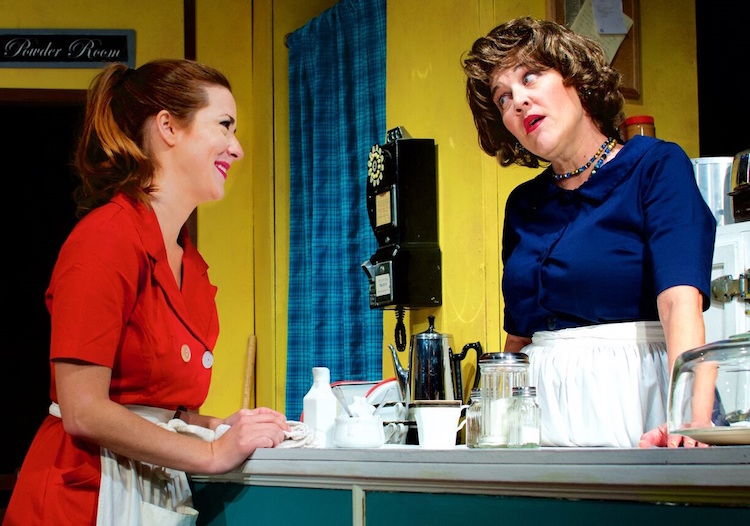 You've seen this kind of setup hundreds of times before, from Hitchock's Lifeboat to Sartre's No Exit to television series such as Gilligan's Island and The Seinfeld Show. Writers collect characters and set them spinning and bouncing off one another. In fact, Inge's successful 1955 play and the 1956 film of it starring Marilyn Monroe gave rise to 26 episodes of an ABC weekly drama Bus Stop that despite its intelligent writing and plotting eventually was blown away by Bonanza, a fable of more interest to the American public of Cold War times. 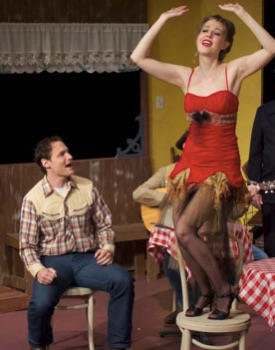 Evelyn LaLonde as Chérie (pronounced 'Cherry') is flustered and alarmed, and Sheriff Will (Rod Mechem) assures her he will protect her.  LaLonde evokes the sympathy of the audience and that of the other two women in the cafe.  She's carrying a suitcase scarcely big enough to contain her underwear, and we'll later discover that the contents don't amount to much more than that. It's not until later in the play we learn that her employment as an aspiring nightclub singer hasn't been enough to pay for her room and board; she seems to have been freelancing as a hooker to keep body and soul together. It's unfortunate that director Arnold has LaLonde do her only singing number in an apparently untrained atrocious voice, for this actress could have added poignancy by demonstrating the real talent she possesses.

Young cowboy Bo Decker wants to get married, and he wrassled Chérie aboard this bus as she was trying to flee town to escape him.  Clay Avery as Decker has been cast in a role perfectly suited for him. Slim, handsome and naive, Bo Decker has the blind guileless enthusiasm of a frontiersman. Avery gives Decker a loud, declamatory style and an assertiveness that paradoxically demonstrates just how uncertain of himself he actually is. 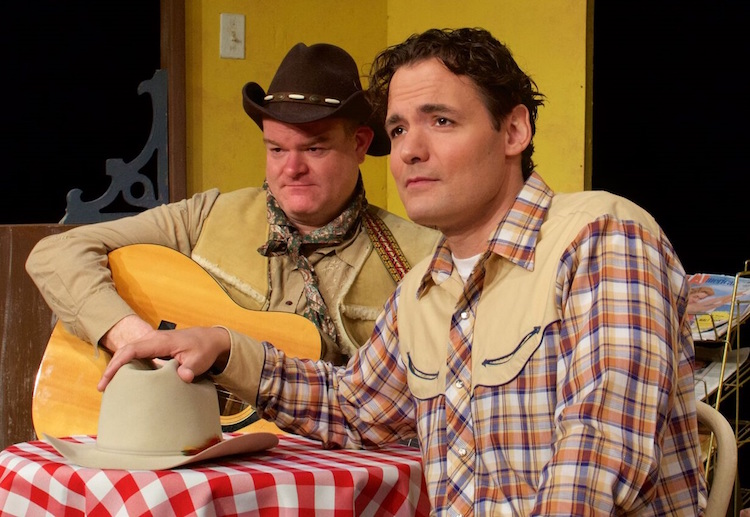 Inge bumps the plot forward by giving the audience two- and three-person scenes. Although almost all action takes place in this closed room (except for a clandestine assignation and a fight that occurs offstage), Inge's script obliges director Tracy Arnold to exercise agility so that the unengaged characters are focused elsewhere and apparently oblivious to what we hear. The audience accepts this convention, which is similar to ordinary cinematic focus where the director controls what you see. A more assertive lighting design might have rendered the convention more evident.  The lights are full up throughout, even though this action is supposedly to be occuring between 1 o'clock and dawn. Performing these restricted scenes in subtle pools of light would have reminded us that other characters are being kept literally and metaphorically in the dark. 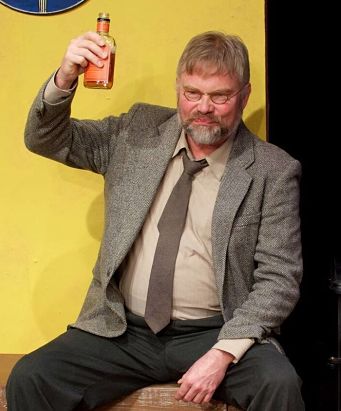 Robert Stevens as the bibulous Dr. Gerald Lyman is a fine actor playing a poor actor, no mean feat. The pseudo-academic, swigging away at his pint flask, declaims all too familiar lines from Shakespeare to impress the young waitress, confesses a life of disastrous marriages and seeks to lure the credulous youngster to an assignation at the next big town. Stevens makes Lyman glib and smooth, a con man; a bit more regret and hesitation would have given Lyman greater depth and made him more interesting. As played, Dr. Lyman's change of plans toward the finale represents no change of heart.

Jesslyn Parks as the young waitress is in many ways the most appealing character in the room. Her cheefulness, naïveté and good heartedness are such that she can animate these tired delayed passengers to participate in a talent show at four o'clock in the morning.  Though almost all the others are leaving this crossroads, one has the feeling that  Elma's the one who'll eventually be getting where she really wants to go.

To my surprise, the character who emerges as the most authentic is an observer. Beau Paul is Virgil, the older cowpoke who's traveling with young Bo Decker. He spends a good deal of time working to calm down the younger man and to avert confrontations.  When he does speak, he tells us of his missteps and regrets. Beau Paul isn't charismatic or intent on achieving anything; but as the foil to Avery and a caution to the inhibited, he has a rueful dignity.

Once the love quests are resolved, Virgil elects to withdraw. Inge hammers the message home when he has cafe owner Grace admonish Virgil that once the bus has left, he can't stay inside. He'll have to go back out into the cold.

Virgil acknowledges that and accepts it. 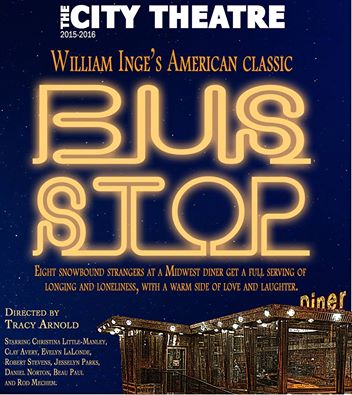