Review: Beauty and the Beast by Georgetown Palace Theatre
by Michael Meigs 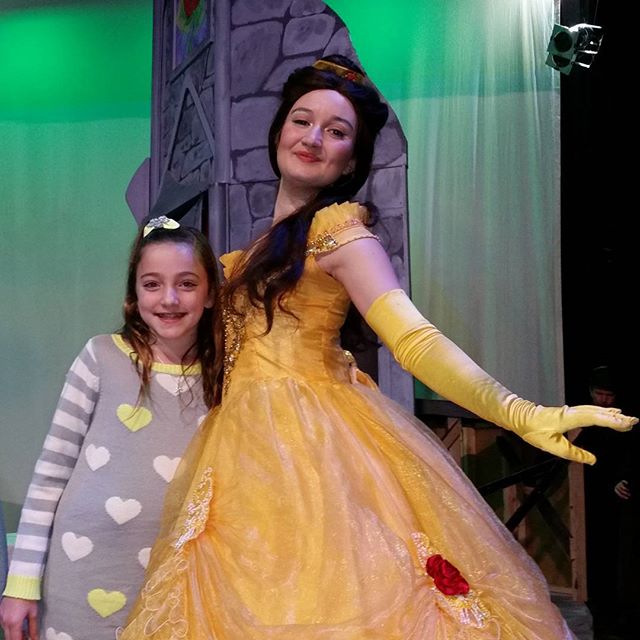 I lingered after the Georgetown Palace's Saturday matinee performance of Beauty and the Beast, intending to say hello to Kristin DeGroot, the sweet soprano who plays Belle. Watching the excitement onstage well after the curtain call, I was treated to an unmistakeable demonstration of why this production is running strong and full for its more than six-week run as the Palace's annual Great Big Holiday Extravaganza.

DeGroot was surrounded by her fans, a press of small girls with sparkling eyes. They were a well behaved crowd, patiently taking turns for an opportunity to talk to the star, pose with her and often as not to get an enthusiastic hug. It's the sort of adulation you might see at Disney World when characters familiar from Disney tales welcome you and pose for snapshots, a reminder that Uncle Walt and his successors have built a magic palace of myth in the American consciousness, one that shows no signs of fading in our current age of anxiety. Disney's fables absorb and reflect America's optimism, serving as a better Magic Mirror than anything you're going to see on news networks or Facebook.

Belle is devoted to her dear old sweet lunatic dad, and she's plucky and selfless to the point of renouncing the world and offering herself as hostage to the abrupt and impatient Beast living in the cursed castle. The first first seconds of the play show us how he got there; his haughtiness as a handsome prince got him smacked with a curse, transformed into a beast with traces of wolf, bull and warthog.  No wonder he's grumpy!

Congratulations are due to the unnamed designer of makeup for the Beast; perhaps this was Tamar Madrigal, credited for the costume.

Time is running out in the enchanted castle, marked by petals dropping from an enchanted rose, and household retainers are metamorphising into household objects: avuncular Cogsworth (Curt Olson) is half-clock, Jennifer Tucker as Mrs. Potts is a charming lifesize teapot who'd be quite at home below stairs at Downton Abbey, and her child Chip (Katelyn Illig) is a cup with a cute child-sized face. Creighton Moench is a vaguely French-accented Lumière, who's become a candelabra with somewhat disconcerting candle stumps instead of hands. 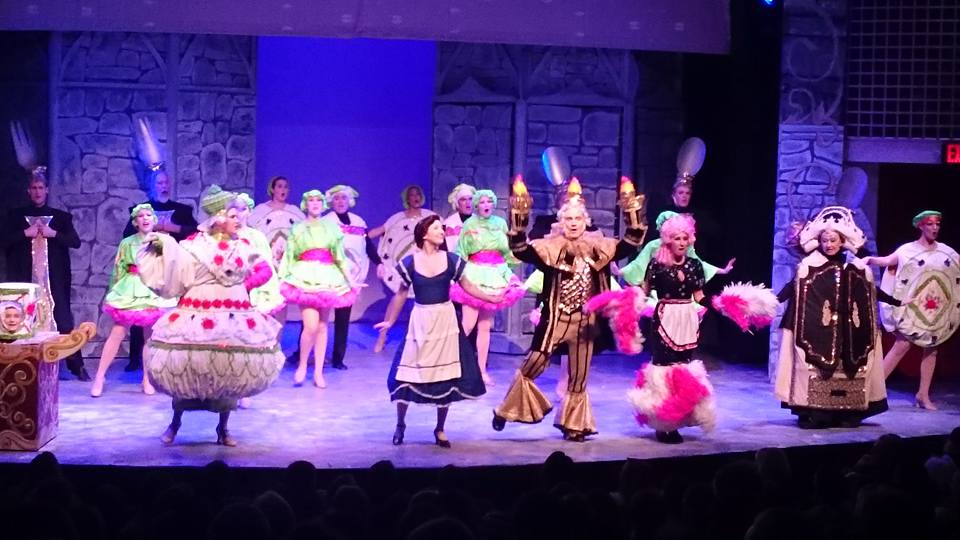 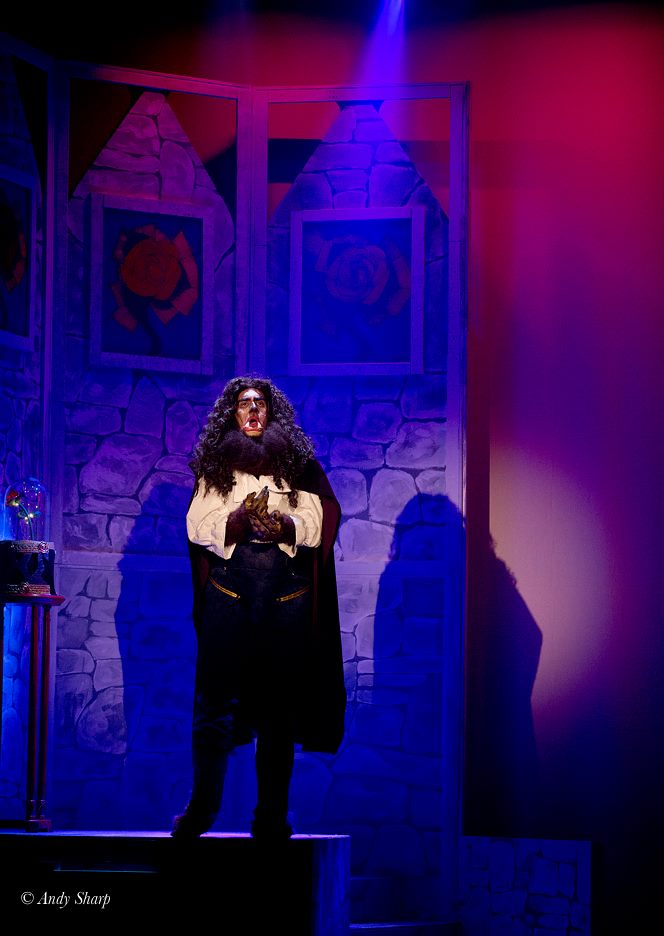 The village that bookish Belle leaves behind is populated by its own assortment of funny folk. Genuinely handsome and trim Phil Rodriguez is strutting Gaston, the egotist who leches after Belle and would probably be quarterback of the village football team. Buddy Novak plays his groveling comic sidekick LeFou (French: The Fool), giving a vigorously comic performance with an distinctly goofy lilt. And the Palace fills the stage with other folks of all ages -- among my favorites were 'Silly Girls' Emily Niswonger, Katya Welch, and Caliegh Wilson. There's much movement and clowning directed by Ron Watson, dance by Vincent Sandoval and singing prepped by music director David Sherline. The music is prerecorded and run by Lannie Hilboldt through a mysterious 'Orchextra' device. Costumes by Ramona Haas of A Cut Above leap into view with the whimsical exaggeration of comic book art

These are two-dimensional characters for the most part, and not only because they're modeled after an animated film. The most evident exception is the Beast. Ismael Soto gives us a shaggy creature whose heart isn't really into being mean; he barks but doesn't bite until wolves threaten Belle. The contrast with town boy Gaston is deliberate and well realized, for we see the Beast both yearning and learning. His final-act transformation back into an eligible human prince is surprising, acrobatic and impressive -- all the more so for those of us watching closely who saw Soto trusting DeGroot to secure the harness snaps that were about to lift him high above the stage.