Review: As You Like It by Scottish Rite Theater
by Michael Meigs

As You Like It is one of the gentlest and most whimsical of Shakespeare's works, a playful edifice built on oppositions.

The court versus the forest, autocratic brothers excluding their less influentialbrothers; lovers vying in vain for their ladies and, inevitably, a fair maid cross-dressing as a fair youth.

An aged servant finances with his last savings the flight into the forest of his impetuous young master.  That master braves a fight for the sake of his ancient retainer but instead of armed resistance meets open handed generosity.

A witty, carefree fool flings himself into lusty romance; a melancholy gentleman observes, philosophizes and abstains from the world.

"As you like it . . . ." Perhaps the enigmatic ad libertam title doesn't immediately conjur up the plot for you?

A sketch, then: ill-tempered Duke Frederick (Garry Peters) has exiled his brother (also Garry Peters) to the faraway forest of Arden. Similarly, ill-tempered nobleman Oliver De Bois (Fred Jones) has kept his youngest brother Orlando (Scott Daigle) untutored and away from the court. Orlando's objections to this treatment and a brotherly scuffle prompt the elder brother to hire the redoubtable wrestler Charles (Casey Weed) to administer a good drubbing to Orlando. 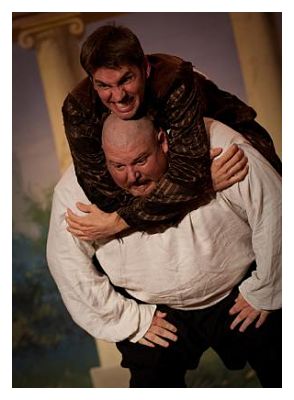 At the wrestling match, Orlando falls for fair Rosalind, daughter of the exiled Duke. Rustic, bedazzled by her and tongue-tied, in a dilemma shared by many an adolescent male, he has no idea how to court her.

The grumpy Duke exiles Rosalind from the court, prompting both Rosalind (Gwen Kelso) and his own daughter Celia (Shannon Grounds) to fly surreptitiously to the forest, accompanied by jovial Touchstone the fool (Judd Farris). Quite unknown to them, others are bound that way, as well: having learned that his brother is plotting against him, Orlando flees with his ancient servant Adam (Justin Scalise). 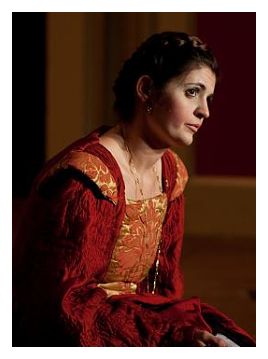 You'll see many familiar faces in this cast, drawn from the floating cast of Austin Shakespearians. Several appeared last summer in the same theatre's production of Twelfth Night. Others were in Austin Shakespeare's Macbeth, The World's Fastest Hamlet, or Romeo and Juliet.Gwen Kelso, appearing here as the plucky Rosalind, was a dreamy, breathy Juliet for their Spanish-tinged production in Zilker Park. Both musician Jennifer Davis and mischievous Casey Weed are regulars with the Baron's Men at the Curtain Theatre.

They know what they're doing and they do it well. Especially with their confident mastery of Shakespeare's language. 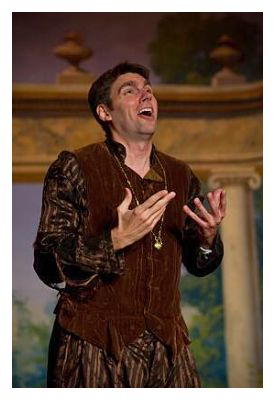 The central tickle in As You Like It is the education of Orlando. Scott Daigle plays him with energy as open, emphatic and sincere. Orlando knows neither the court nor courtly behavior. During his forest adventure he learns good manners from the exiled Duke and his men. As for love, he has been papering the forest with infatuated doggerel dedicated to Rosalind. 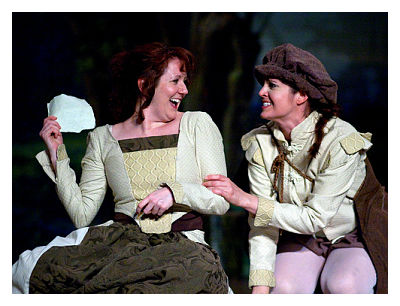 Orlando is schooled in the arts of courting by his new friend Ganymede. That's Rosalind, disguised, who persuades Orlando to pretend that he (she) is his belovéd, temperamental and changing but still to be won. Kelso and Shannon Grounds as Celia her noble companion are a bright-eyed pair of intriguers, quickly caught up in their own traps. Since Rosalind has already confided to Celia how very hot she is for Orlando, we greatly enjoy the comic tug-of-war between her two personalities -- Rosalind, desiring to be desired, and Ganymede, cautioning Orlando against women's inconstancy. 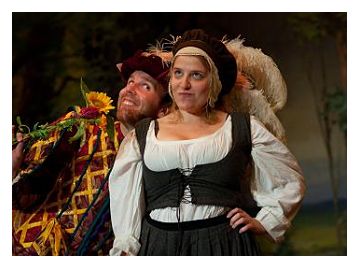 Shakespeare creates a superb stable of fools in this play, and Beth Burns has cast them all to good advantage. Judd Farris as Touchstone is bouncy, self-mocking, and flirtatious; his lustful courtship of country wench Audrey goes with vengeance down the primrose path of dalliance. This character loves contradictions. There's a delicious set of quibbles with a shepherd in Act II, scene 2, which starts when that rustic asks Touchstone his opinion of the shepherd's life. Touchstone replies, 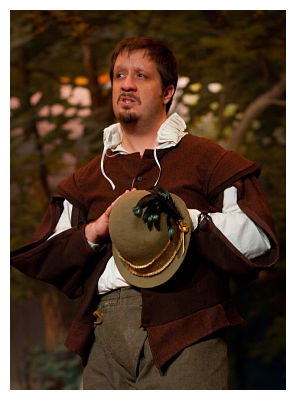 Contrasting to Touchstone's air and fire is the sombre personality of Jacques, played with thoughtful intelligence by Robert Matney. Jacques is also a commentator and truth-teller, but he's of gentle birth, a member of the band of the exiled Duke. When we first see him, Jacques is elated to report that  a motley fool has arrived in the forest. Jacques is excited by the prospect of wit; but we learn in following scenes he will not brook folly in bad verse, as impetuous behavior or with any striving. Jacques' speech on the "seven ages of man" is a monologue often extracted for dramatic presentations, and John Gielgud's orotund, moody delivey of it threatens to live forever. Matney delivers this meditation simply, without high phrasing, as if Jacques were putting into words, and not for the first time, the reasons for his own watchful disengagement.

And of comics and fools there are plenty more! Casey Weed's Charles the wrestler smirks, parades, flirts and leers, making the contest with Orlando all the more exciting; and Weed as simple country swain William takes an upbraiding from  rival Touchstone 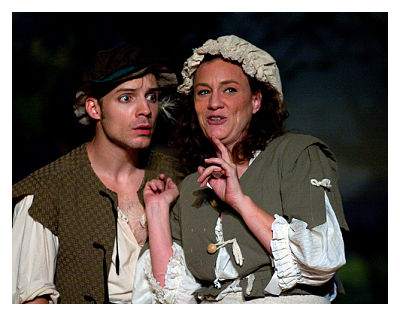 with all the unconcern of a stone. Jill K. Swanson as Phebe the shepherdess in love with Ganymede is a sharp, comic sketch. Justin Scalise, seen often in edgy kinetic roles, just about steals the stage from Daigle's Orlando as he plays the ancient Adam, pottering dim-eyed about the scene while Orlando emotes. Scalise later does Silvius, the shepherd enamored of Phebe, with a different turn on fixéd dimness -- earnest, limited and obedient.

And they tell me that the company's dance at curtain call has now been properly polished up!

No tears, no swashbuckling, lots of laughter at human folly -- this is a captivating night of amusements.

Review by Barry Pineo in the Austin Chronicle, August 20: ". . . this is easily one of the more accomplished productions of a Shakespeare play I've seen in my 20-plus years in Austin. And besides, can you really go wrong attending any play that begins with a wrestling match and ends with a jig?"

As You Like It
by William Shakespeare
Scottish Rite Theater 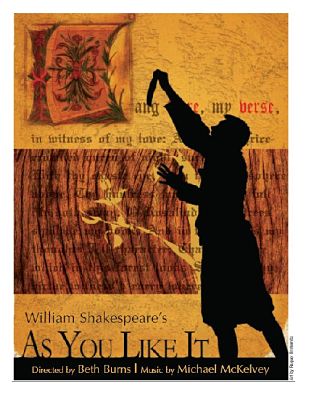