The artists stood at easels or sat at drawing tables in the well of the theatre, downstage center, or more aptly, house center.  The stage was multilevel, rising before us and offering sightlines better than in most figurative art workshops.  The lighting on the models was also much better than in any workshop.  My choice of oil on canvas as the medium ensured no relaxation on my part.  I sweated and labored continually, and my brushes and charcoals hummed throughout the show; I panted through the entire five-minute break the artists were given in the middle of the performance.  But my earnest efforts had actually begun before the show, with hauling four loads of art equipment and supplies from my pickup into the theatre.  And I thought I had a minimal setup!  Lesson: Oil painting never allows a minimal setup.

I was a guest artist for one evening performance of Paper Chairs’ Art Show/Model Show at the Offshoot Theatre in East Austin, where creativity seem always to find new and brilliant expression.  This show simulated in its setting an art class or workshop, where artists actually strive for, well, something in the realm of figurative art.  The workshop setting gave rise to the need for working artists in the show, and so I signed up.  But it was the art models/actors who controlled the action and gave all the lines and spoke all the texts in the show.  The only artists who spoke were those who did so in projected video interviews on a screen above the stage. 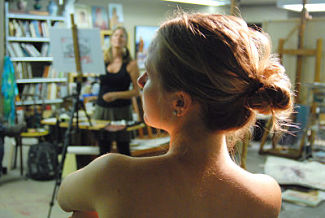 The art models, you may surmise, showed some attitude, i.e., ‘tude, and with good reason.  Artists and art models exist in an archetypical relationship. They have left their traces on Paleolithic cave walls and in every succeeding stage of world art since that time, with the possibleexceptions of Hebraic and Islamic art.  In all those eras, expression and communication were the province of the artists, while the fully exposed models remained silent, ultimately and ironically invisible in terms of their identities, female or male.  The model merely provided a useful form for the visual telling of allegories and mythic adventures.  The exception of portrait art proves the rule: there, the dominance of the artist fell away when painting a fully empowered and clothed king, queen or aristocrat as portrait subject, not model.  The portrait titles are the names of those depicted.

The models who created Art Show/Model Show raged against all of that.  They spoke and the artists remained silent.  Art instruction videos contextualized their world, and then the models offered commentary on it all, never more hilariously than when model Kelli Bland walked among the artists in faux art teacher mode giving ironic, almost snide, instructions in how to draw body parts, mostly by making impersonal and insensitive comments about “the model.”  (“You can’t see that bone on the model, but it is there under all her fat.”) All models have heard such brutally clinical and basically rude comments in the course of their modeling careers. 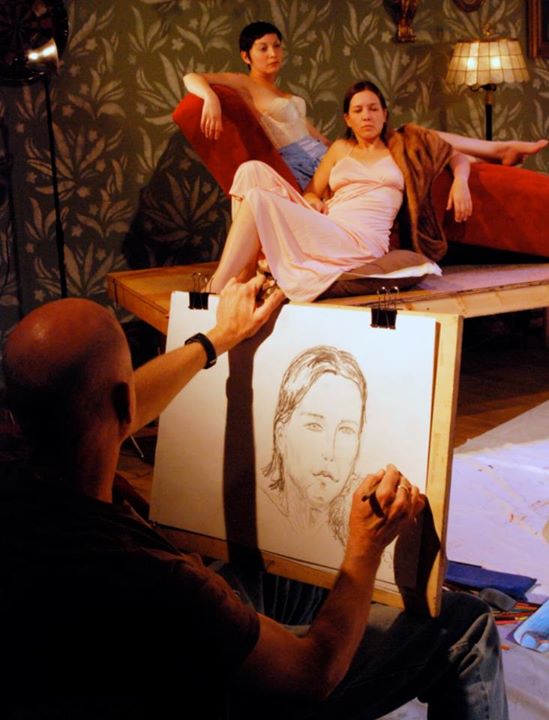 Bland’s statements jostled me out of my sweaty painting reverie.  I was finding the poses much too short to allow me to record in oil any meaningful expressions of form.  The performance started with fifteen minutes of one-minute gesture poses.  I was equipped with charcoal sticks and paper for that part of it, but the follow-on poses were variable in length and usually ended just as I had decided on a useful approach.  I was overwhelmed with visual choices.  This was a show with five nude models posing at various points on the multilevel stage throughout the performance.  The four females and one male -- Meghan Morongova, Kelli Bland, Jen Brown, Michelle Keffer, and Jorge Sermini -- are physically, intellectually, and esthetically perhaps among the most spectacular and beautiful set of models an artist is likely to see. In my emotionally roiled state I was constantly haunted by the thought  that while I was focusing on one model I was missing four other equally worthy poses.  For an artist, it was that good and that frustrating at the same time.

Don’t let the facts about clinical art classes throw you.  Also ignore artists who claim dispassionate interest in models since they're required only for formal guides and inspiration.  Artists and models are brought together by needs and attractions at all levels, from professional esthetics to personal interest.  Art history has more than a few stories in which Desire has raised its ugly and enchanting head in the studio, but this is only one dynamic of the bond.  The inescapable human need to connect with other human beings lies at the heart of the artist/model relationship, and that is why viewers love figurative art and it never goes out of fashion.  In this show, I felt connected to all the artists around me and to the models above me.  This was a tribal rite of connection and affirmation, and the audience, issued sketchbooks at the door, was a group of guests invited to the feast. 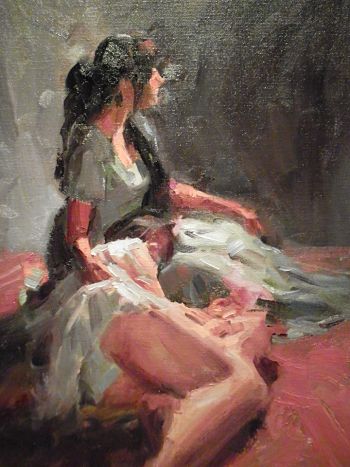 The models offered unflinching views of themselves, revealing their inner and outer states simultaneously.  Jen Brown, en pose, related her personal history of high school abuse, breast reduction surgery, her fluctuating self-image and its effects on her intimacy, career, and art.  She never mentioned, but allowed us to glimpse, the one sustaining and obvious quality that got her through it all—her inspiring courage.

Michelle Keffer related her nervousness at posing nude in her first modeling gig, an open workshop.  She was shocked about halfway through the session to discover three peeping toms of about age six, who had climbed a fire escape to gaze at her through a window.  She reflected philosophically that it might have been the first time the boys had seen breasts.  I happened to have been an artist in that very session, and I attest to the truth of Michelle’s story.

Jorge Sermini, images of whom are in paintings on two or three continents, commented that his modeling was a way of transmitting part of his identity beyond his own death.  This may be an almost unconscious drive in all art models.

Meghan Morongova had the last word.  She told us that she had seen Van Gogh’s Starry Night twice, years apart and on two different continents.  This was evidence that the work of art traveled, moving through time and space, and thus had a living existence on its own, just as she had.  I cannot explain the connection; I can only observe, that Starry Night has no human figures in it (let’s all review it in our minds’ eyes), while to anyone familiar with it and to many writers it is seen as a portal or bridge between abstraction and depiction, partly one, partly the other.  It is unquestionably expressionistic.  To Meghan, art has its own kind of life, and her modeling connects her directly and intimately to that living art.  This connection is an emphatic affirmation of what it means to be human. 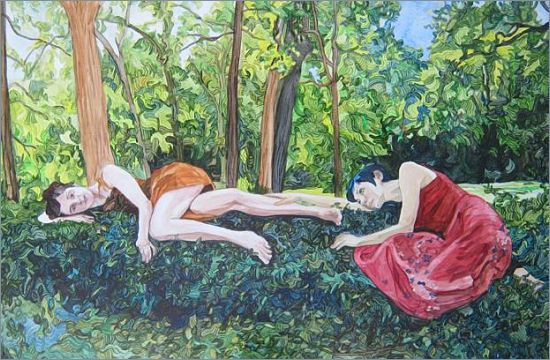 I could claim no finished work at the close of the session, but I did have a few bits and pieces worthy of continuation.  Everything was in process, just as in life.  I was happily exhausted, as were all the artists and models.  The sense that we had created something that would move into the future was no idle thought.  The models who created this show classify it as documentary theatre.  They have a video record of their topic much more extensive than the images shown in the performance.  Plans call for development in allied media and further performance runs, perhaps in other cities.  They have identified and developed a powerful topic and a bold presentation.  As I carried my last load to my truck and drove home, I wished them well. 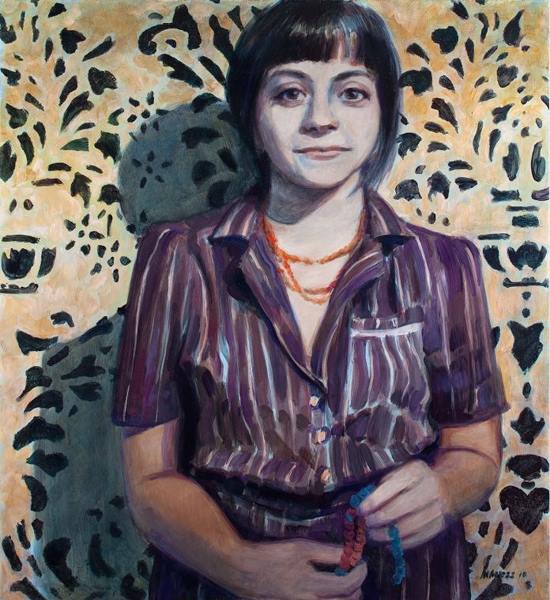 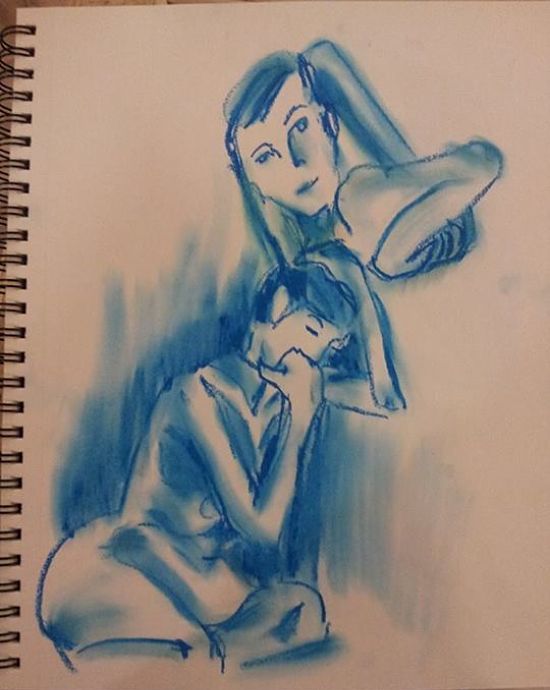 CLICK to view a sample of drawings in the community sketchbooks, posted by Paper Chairs on Facebook 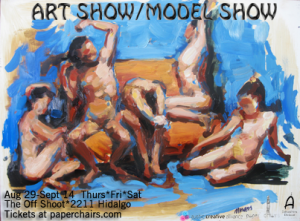