For the school's opening On Tour! production, student directors Ansley Lee and Sierra Tothero from McCallum Academy's theatre department took over the Blue Theatre, out behind the Goodwill warehouse on Springdale road.  It was a friendly and successful conquest, with manager Jennie Gravenstein running concessions and generally helping out in the excited rush.

Almost, Maine by John Cariani is a whimsical set of sketches about folks in the icy northern reaches of the United States.  He's looking at love and how it creeps up on us, even on the famously blue-collar, tactiturn and slow-moving young Mainers.  Cariani likes to turn figures of speech inside-out.  For example, Gayle (Kahla Brown) comes storming into the house of her boyfriend Lendall (Dylan Jones), having abruptly decided, after 11 years of courtship, that she wants all her love back.  To prove her determination, she brings in boxes and bags full of love from her car, and flings them down.  "Here!  This is all the love you gave me!  Now I want mine all back!"  Lendall rides through the absurdity and rises to the occasion.

In "Her Heart," handyman East (James Uhl) finds a woman standing in his winter-bound front yard at night, looking for the northern lights.  His awkward inquiries bring him a lot more than he was expecting.  Glory (Lauren Tothero) has a broken heart, and she's carrying it in a paper bag.  In "They Fell" Avery Martin and Harrison Council are Chad and Randy, the Maine equivalent of good ole boys, drinking beers on yet another Friday night and telling stories about their romantic disappointments.  ("She told me -- I stank!")  And then, in turn, they fall in love.  Literally.  Falling down in fits of surprise, struck down by inspiration.  The last-moment glance of sly triumph on Martin's face, just before the blackout, was one of the best laughs of the night.

Students did these pieces with energy and confidence, making the most of the humor.  The ensemble curtain call was cleverly staged.

The stand-out of the night was Lauren Tothero, first as "Glory" with the broken heart and later as "Hope," a woman who comes rushing back to this forgotten town to deliver, finally, a long overdue message.  Tothero was endearing in each role, but better than that, she was achieving her comedy by exercising a fine control of pause, thought, timing and reaction.

The students raffled off the garden bench used as the principal stage piece for Almost, Maine and they happily accepted donations for the Mac theatre program -- either at the theatre entrance or via the MacTheatre Fund webpage.  Revenue supports the program, including this summer's trip to Costa Rica to present their bilingual version of Evita.  Next up for On Tour! are God's Ear at the Blue, Monday & Tuesday, May 17-18, and then Falling into Five by Madeline Newchurch and other plays at the Salvage Vanguard, May 20-22. 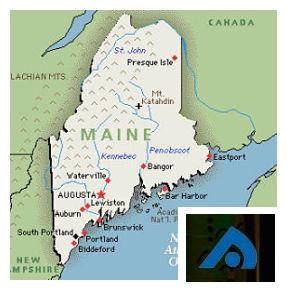